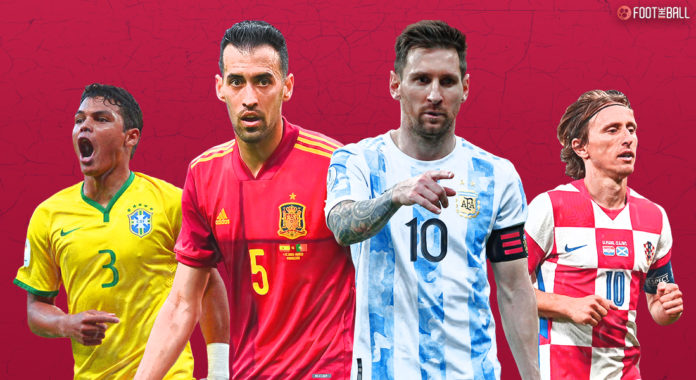 The road to the FIFA World Cup 2022 in Qatar is almost complete. Despite the questions surrounding Qatar as hosts, the global event will be a hit as always. FIFA has been doing its utmost to make the preparations as smooth as possible, including getting its first sponsor from India.

However, the main ingredients for success are the nations and their players as usual. There have been several notable stories in this regard already.

Italy have been knocked out by North Macedonia in the play-off semi-final. This means the Azzurri will be missing a second straight FIFA World Cup. The world may never get to see Giorgio Chiellini and Leonardo Bonucci take the field at a World Cup again.

Indeed, there are several players already qualified or on the verge of qualifying who could be playing their last World Cup.

FootTheBall lists 10 of the biggest football players whom the world will miss at this stage after Qatar 2022.

One of the greatest players to ever grace the game. There is no doubt that Messi has endured a tough first season with PSG. The Barcelona legend has been instrumental in the rebirth of the Catalans over the past two decades. Messi’s long quest for an international trophy with Argentina ended last year by winning the Copa America.

Most goals ✅
Most assists ✅
Player of the Tournament ✅
Winner ✅

Now the focus turns to the World Cup in Qatar and giving it his all. Messi is 34-years-old and has already spoken of reassessing things after the tournament. His contract at PSG also expires in 2023 so going out on a high is high on his wishlist. La Albiceleste came closest in 2014 but of course, failed at the final step.

Messi will be the main cog as always if Argentina are to finally realize their dream of winning the World Cup since Diego Maradona.

The highest scoring goal scorer in FIFA’s history, Ronaldo has been key in Portugal lifting trophies. He was on the sidelines barking instructions in the final of Euro 2016. Ronaldo was on the pitch in the final of the 2018-19 UEFA Nations League. Needless to say, the impact of his play has transcended generations and made Portugal a powerhouse.

However, the World Cup has always proved to be a step too far. Portugal have several top players but the lack of big-game experience dooms them. Ronaldo will be 41 by the time the next World Cup rolls around so he is desperate to make good of this one.

Unfortunately, Portugal still have a hurdle to clear in the form of North Macedonia in the playoff final. The Selecao are the overwhelming favorites but stranger things have happened. Ronaldo’s last hurrah may not even reach Qatar 2022.

The 2018 Ballon d’Or winner was one of Croatia’s heroes in their magical run to the final in Russia. Though they lost to France, Modric was awarded the Golden Ball for his performances. The midfield maestro is still going strong for Real Madrid, bossing the game against much younger opponents.

One of the best midfielders of his generation. ⭐ pic.twitter.com/fKPqCK2Ugo

Croatia pipped Russia to the automatic qualifying spot in Group H with Modric scoring thrice. At 36-years-old, Modric is his country’s most capped player with 147 appearances. Moreover, his successor is also ready in Lovro Majer of Stade Rennes. He will hit the 150 mark in the group stage and could be integral once again if Croatia are to go deep.

The ‘Rolls-Royce’ defender has experienced a career rejuvenation with Chelsea. Silva has become one of the leading defenders in the world with the Blues. He has remained a mainstay with Brazil, having amassed over 100 caps.

The Selecao were thoroughly dominant in their qualifying campaign and head to Qatar 2022 as one of the favorites. No doubt Silva will be a crucial piece in a mostly young defence if Brazil are to lift the World Cup for the first time since 2002. He will be turning 38 in September so Qatar will be his last chance to add the most coveted international trophy.

The Swedish lion has been in the news recently but for a different reason than one would expect. Ibrahimovic talked about his retirement, saying it should scare fans but he will continue playing till someone better comes. Having left national duty, Ibrahimovic is back and gunning for another World Cup appearance.

Sweden defeated Italy in the playoffs back in 2018 and find themselves in a similar position this time. Poland stand in the way with Ibrahimovic knowing another World Cup appearance will further his legacy.

The brash talker has been lifting silverware at the club level for years and could yet add another Serie A title this year. The 40-year-old is one of the oldest active players in football and could make history in Qatar 2022.

The 2018 World Cup-winning captain and one of the stalwarts of the French team. Lloris has been ever-present since bursting onto the scene with Lyon in 2008. Though there have been some wobbly performances recently with Spurs, Lloris remains first-choice with France.

Hugo Lloris has played over 800 matches for Nice, Lyon, Tottenham Hotspur and France.

A World Cup winner in 2018, he's still performing at the highest level for club and country aged 35.#COYS pic.twitter.com/VMkeSlbWPN

Didier Deschamps places a lot of faith in Lloris who will be instrumental in handling a young-ish defence at Qatar 2022. The World Cup is always a special occasion for Les Bleus who have a plethora of superstars. Lloris will turn 37 during the tournament itself and is aiming to become one of the few players to win two World Cups.

From one iconic goalkeeper to another, Neuer was impressive in 2014 as Germany kept a clean sheet in the final. The longtime Bayern Munich custodian is renowned for his sweeper-keeper skills and mastery of his feet. Neuer bemoaned Germany’s lack of penetration in their defeat to England at Euro 2020.

Manuel Neuer is heading to his 4th and final World Cup. Can he bring it home one more time? pic.twitter.com/5uBmIeOnZT

Die Mannschaft will have a very young squad with Neuer comfortably the oldest at 36. He will need to galvanize the troops properly if Germany are to play well. The defence, especially, is a mixture of young talent with huge potential. Though the Germans are not favorites, there have been stranger events at the FIFA World Cup over the years.

It is safe to say Suarez is not short of iconic moments at any World Cup. The handball in 2010, the biting incident in 2014…El Pistolero knows his stage well. Suarez has been a prolific scorer throughout his career and has won trophies wherever he has played. He is the all-time leading goal scorer with 67 goals for Uruguay and lifted the Copa America in 2011.

Uruguay have booked their place in the 2022 World Cup after a win against Peru.

Edinson Cavani and Luis Suarez will play in their FOURTH straight World Cup together.

The duo were born in the same town just two weeks apart!

However, La Celeste have always struggled to reclaim the World Cup since their two triumphs in the 1930s. Suarez is 35-years-old and is not having his best season with Atletico Madrid but for Uruguay, he remains a key asset. Could Qatar 2022 be the epic conclusion to a famed career?

Wales. Golf. Madrid. That certainly seems to be the order nowadays. Bale has been frozen out at Real Madrid, playing only 33 minutes so far. However, at the national level, he has been the hero time and again. Bale’s brace, which included a sumptuous free-kick, saw Wales pip Austria to move into the playoff final.

The Welsh attacker will be leaving Madrid at the end of the season but his main focus lies elsewhere. Wales are bidding to make their return to the FIFA World Cup for the first time since 1958. In that regard, Bale is the most potent weapon they have. He is one of those players who play exponentially well for the national team.

Wales are one game away from their first World Cup since 1958.

One game away from securing legendary status. pic.twitter.com/8zITtca7K6

However, despite being just 32-years-old, this could be Bale’s lone World Cup. Wales do not produce too many world-class players and when the next time will come is impossible to predict.

The longtime midfield general for Barcelona and Spain over many, many years. Busquets is excellent in controlling the tempo of a match. La Roja are going through a full youth bloom and Busquets is tasked with guiding the youngsters. Pedri, Gavi, Nico Gonzalez, Dani Olmo, Yeremi Pino and others. Alongside Gerard Pique, these are two players who are overseeing the next generation.

This video of Sergio Busquets training with the Spanish National Team back in November last year is so aesthetically pleasing and satisfying to watch. He makes it look so simple! 🐙

Granted, his pace has decreased and if he loses the ball in a dangerous area, that’s a threat. However, what Busquets provides with his skillset is essential. His visionary passing and reading of the game are always on display with Spain.

Busquets is a veteran, having already won the World Cup in 2010. Qatar 2022 will present the final chance for the 33-year-old to lift the trophy as captain.