FootTheBall reviews the big matches from gameweek four of the Premier League season 2020/21.

It was the first convincing performance from Chelsea this season. The Blues welcomed Crystal Palace on their home soil at the Stamford Bridge. There were a lot of new faces in Chelsea’s lineup. Ben Chilwell started as the left-back and Edouard Mendy was selected between the posts. Reece James made it to the bench for this game which meant Cesar Azpilicueta skippered as the right-back. It was a 4-2-3-1 setup from Frank Lampard. Callum Hudson-Odoi, Kai Havertz, and Timo Werner started as the attacking trio behind Tammy Abraham.

Roy Hodgson used his usual 4-4-2 formation. Eberechi Eze started on the left side of the midfield. Wilfried Zaha continued as a striker alongside Jordan Ayew.

Chelsea gained control of the ball, right from the kick-off. They kept the majority of the possession. Ben Chilwell’s introduction as a left-back provided Timo Werner with the freedom to invert inside and play as a second striker. Hudson-Odoi provided width from the right-hand side of the pitch.

The hosts got their first big chance in the 19th minute. Chelsea attacked on the break as Havertz carried the ball from the halfway line. He found Werner making a run from the left channel whose curling effort was handled comfortably by Vicente Guaita. The first half featured a series of Chelsea’s attacks with a few intermittent raids from Palace.

Chelsea opened the scoring in the second half. Ben Chilwell got his first Premier League goal for the Blues, five minutes after the break. The former Leicester City full-back pounced on the ball from the left-hand side of the box following a mix-up in the six-yard box.

Kurt Zouma doubled the lead at the 66th minute, missing his header from a prior attempt at the hour mark. Jorginho scored a brace following two penalties in a span of four minutes with 12 minutes left on the clock. The Eagles were seen nowhere near Chelsea’s box in the closing stages of the game. 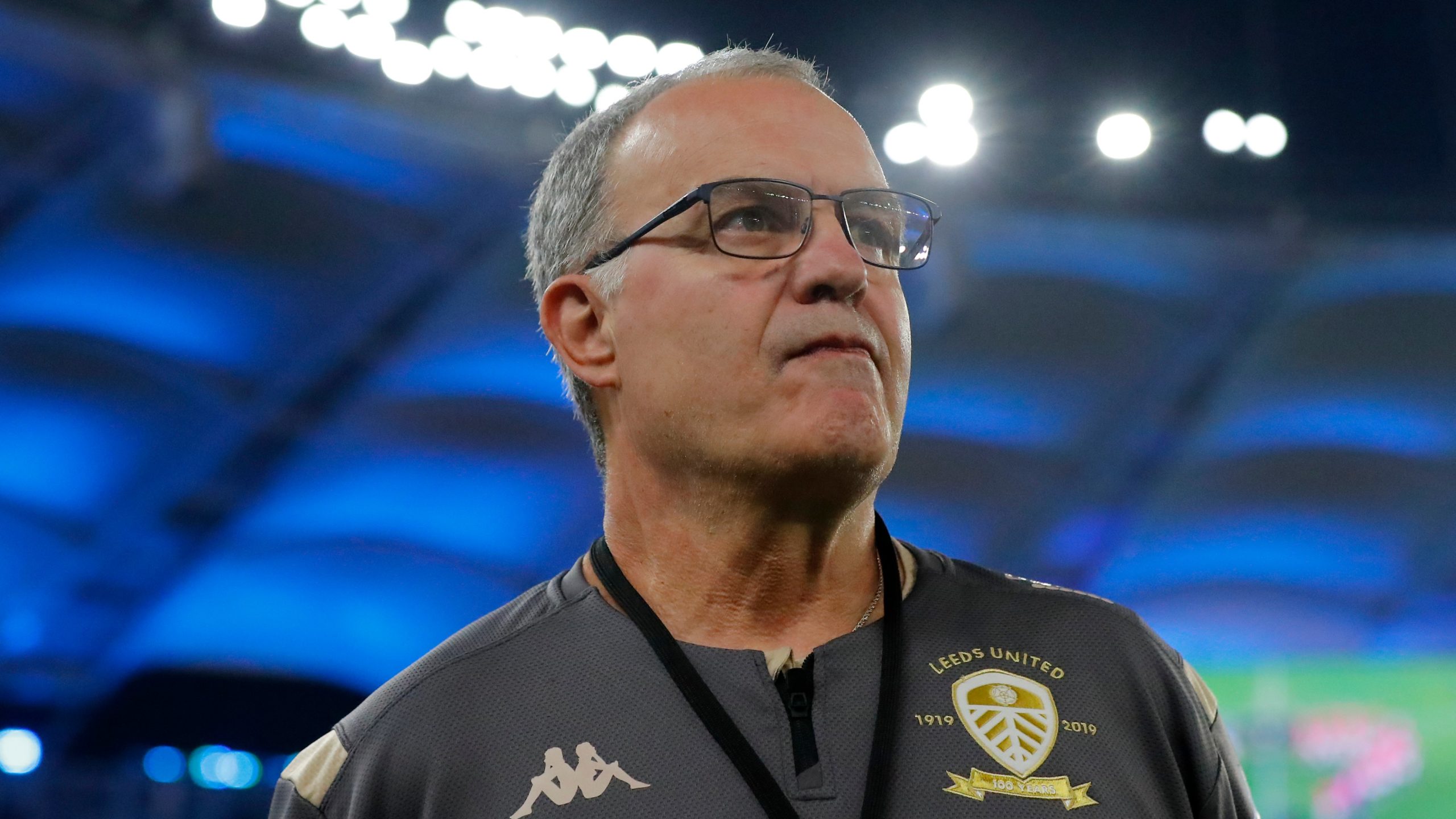 Currently regarded as one of the best coaches in the world, Pep Guardiola met his tactical guru – Marcelo Bielsa. Leeds United played their second major fixture of the season. They hosted the Cityzens at Elland Road.

While he was already disappointed with a five-two loss at the hands of Leicester last week, Guardiola is now starting to feel the heat as Leeds held Manchester City in a one-all draw in gameweek four of the Premier League 2020/21.

The master got the better of his pupil. Leeds kept possession for 52% of the time with seven out of 12 shots on target. The visitors took 26 shots but only one of them hit the target. City knocked on Leeds’s door in the opening three minutes of the game. Kevin De Bruyne, who started as an attacking number eight in a 4-3-3 setup had a go at Leeds’s goal in the third minute. The Manchester City skipper for the evening hit the left frame of the goal following a free-kick.

City’s debutant, Ruben Dias looked sharp early in the game. He, nonetheless, missed a clean header following a corner in the 12th minute. As a result of City’s early domination, Raheem Sterling drew first blood for the visitors. It was a classic Sterling strike. The English winger collected the ball on the left flank, outside the box. He dribbled his way laterally, sliding towards the centre at the edge of the box and pulled the trigger to find the perfect angle. The ball went straight into the bottom right corner of the goal. Illan Meslier could do nothing about it.

Leeds were dangerous in the final ten minutes of the first half. Stuart Dallas made an underlapping run after Leeds switched the play to the right-hand side of the park. Mateusz Klich linked-up the play to divert the ball to the left side where Dallas collected a through-ball from Tyler Roberts. Dallas almost pulled one back for Leeds but the pressure from Kyle Walker aided Ederson to get his hands on the ball.

Two minutes later, in the 39th minute, Phil Foden blasted a shot from the right-wing as he wriggled inside the box. The ball sniffed past the top corner of the far post. The momentum swung back in Leeds’s favour as Luke Ayling got close to scoring an equalizer in the final minute of the first half. Benjamin Mendy made a huge mistake as he conceded possession and Ayling gained control of the ball in dangerous territory. Ayling entered the box from the right-wing, dodged past Aymeric Laporte’s sliding tackle but could not beat Ederson.

Leeds lit up the game in the second half, particularly after Rodrigo Moreno’s introduction. Consequently, the summer recruit got his first goal for Marcelo Bielsa’s side. Ederson failed to catch the ball from a Leeds’s corner which bounced back at Rodrigo’s feet and he scored in an empty net.

The hosts were the better team in the second half with City in command only for five odd minutes in the closing moments of the game. 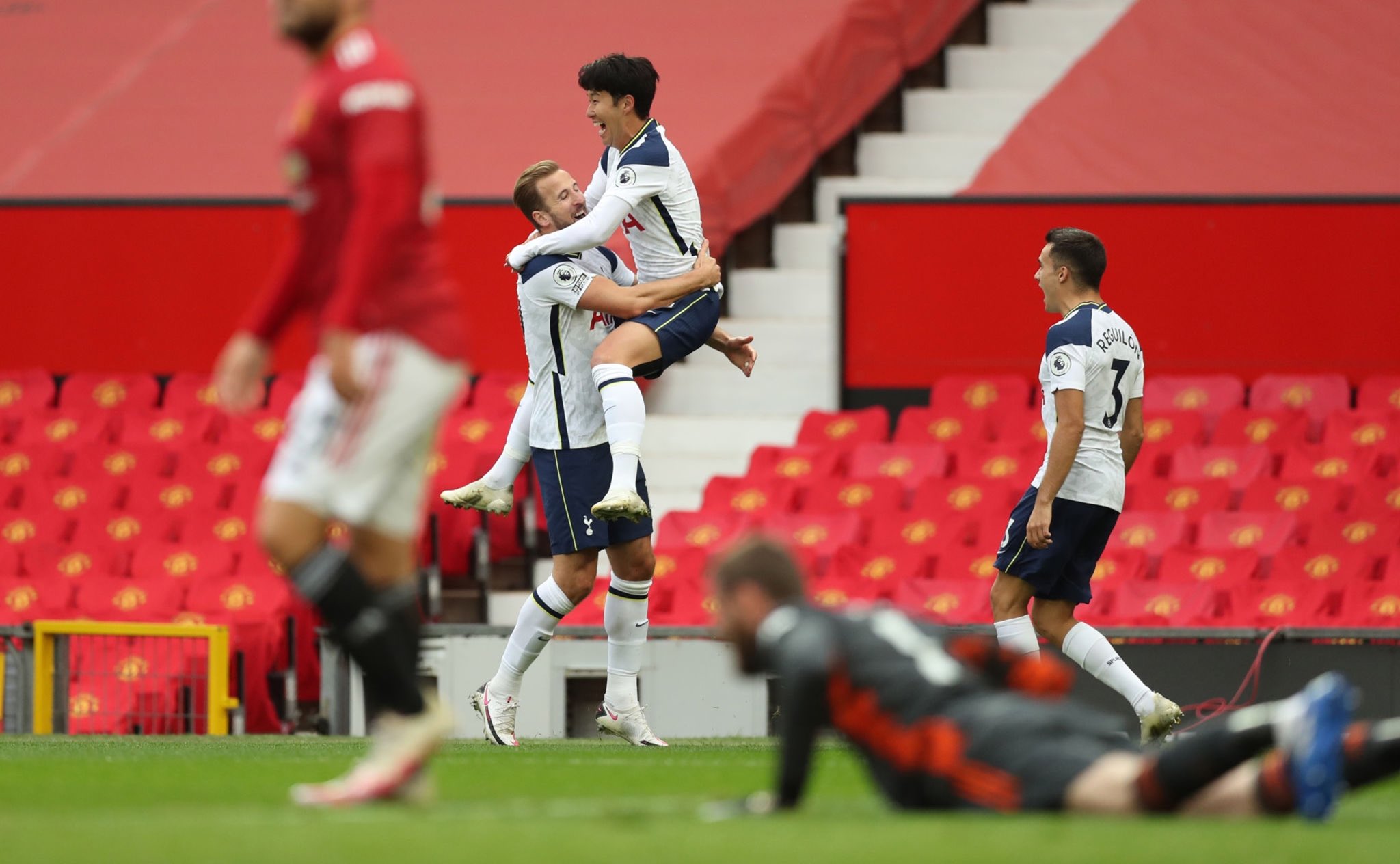 It was a nightmare for the Manchester United fans and Ole Gunnar Solskjaer. Jose Mourinho returned to his former club and wreaked havoc on a ten-man Red Devils.

Manchester United gained an early advantage in the second minute of the game, yet again from a spot-kick. Anthony Martial, United’s lone striker, was brought down by Davinson Sanchez denying him a shot in the six-yard box after Bruno Fernandes cleverly slipped the ball to Martial inside the box. United’s happiness was, however, short-lived.

The hosts lacked the aggression and finesse to press Spurs in the mid and final thirds. United were seemingly holding a mid-block with an aim to cover space. Consequently, Tottenham could easily penetrate the opposition’s half. Two minutes after Fernandes’s goal, United were caught up in a series of headers in their own box which saw Tanguy Ndombele taking advantage to make it one-one. Heung-min Son added another to put Spurs in the lead in the seventh minute.

Tottenham were ruthless and Anthony Martial’s sending off only made it worse for the hosts. Although it was Erik Lamela who initiated the contact with the French striker, the referee decided to send Martial back to the dressing room. As United were down to ten men, Spurs added another to double their cushion. Son squared a pass for Harry Kane, at the centre of the box, who scored. This was only the start of Solskjaer’s nightmare. Son made it four-one, seven minutes before the half-time.

The visitors continued with their battering of Manchester United after the break. Lucas Moura opened space on the right-hand side behind Paul Pogba as he dropped centrally to play a passing combination with Ndombele and Pierre Hojberg. The former Southampton midfielder found Serge Aurier making an overlapping run as he delivered a pin-point through-ball. Aurier controlled the ball and swept it in the bottom left corner of the goal. The score was five-one in Spurs’ favour after just 50 minutes into the match. Harry Kane completed his brace with 11 minutes left for the match to conclude. Tottenham won a penalty which was comfortably converted by their captain.

The problems at Manchester United are, apparently, not limited to their transfer market activity. 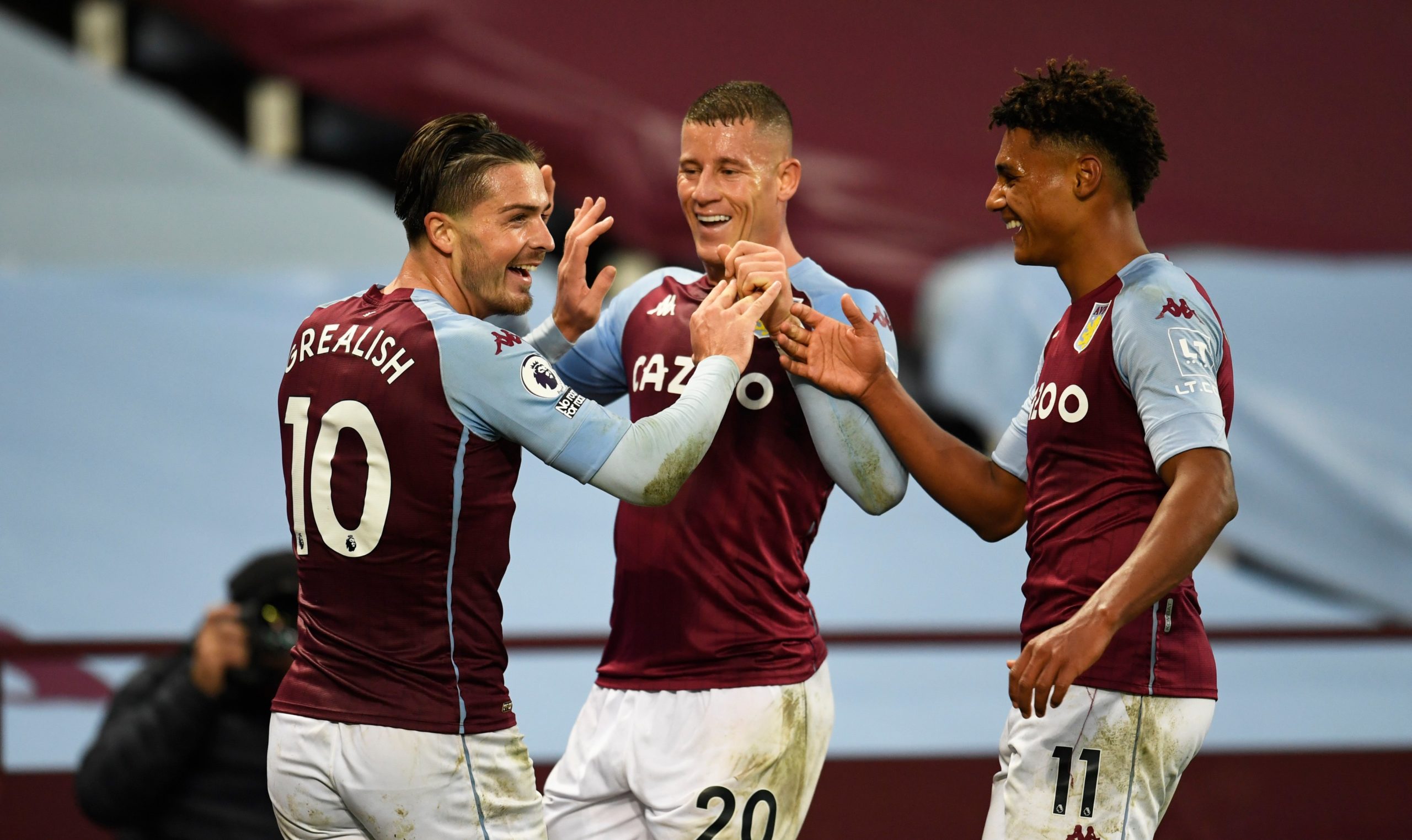 Just when you thought Sunday’s excitement was over, Aston Villa revealed their plans to serve the Premier League champions – in style.

Liverpool were without Sadio Mane as the Senegalese winger tested positive for Covid-19. Diogo Jota stepped up as the left-winger in his stead. Adrian continued as the shot-stopper in place of an injured Alisson. Dean Smith started Villa’s new signing, Ross Barkley in the midfield trio.

Call it a comedy of errors or Liverpool’s lack of concentration, the champions suffered a horrid time at Villa Park. The first one was a poor pass from Adrian who gifted the ball to Jack Grealish. The Lions’ skipper fed Watkins in the centre of the box as he made it one-nil in the fourth minute.

Roberto Firmino missed a chance to equalize after a quarter of an hour into the game. He collected a through-ball from Mohamed Salah as the Brazilian attacker made a run, in behind Villa’s defense. His shot from a tight angle was parried by Emiliano Martinez.

Villa surprised Liverpool, once again, in the 22nd minute. Watkins made a run away from Trent Alexander-Arnold’s shadow. Grealish delivered a through-ball to Villa’s centre-forward who found his way inside the box, created an angle by slightly drifting away from Alexander-Arnold as he bolted the ball in the top right corner. You simply don’t see teams scoring such goals against Liverpool.

While Salah got his first goal against Aston Villa at the 33rd-minute mark, Villa made it four-one before the break. John McGinn restored Villa’s two-goal lead before Watkins completed his hattrick within the first 40 minutes of the match.

The second-half featured a similar story. Ross Barkley scored on his debut for Villa. It was a long-range effort from the left half-space, outside the box. The ball took a deflection from Alexander-Arnold’s foot as it swirled over Adrian at the far post. Five minutes later, Salah scored his second and Liverpool’s final goal of the night at the hour mark. It was a mere formality from the Egyptian forward.

The Aston Villa skipper added two more to make it Jurgen Klopp’s worst defeat in his Premier League career. Grealish’s first goal was, yet again, a deflected effort that ended up inside Liverpool’s goal. Grealish’s second goal arrived from a counter-attack. Alexander-Arnold failed to intercept as Liverpool were holding a high line and the Villa captain had oceans of space to carry the ball and bury it past Adrian.

‘Drink it in! I swear you’ll never see a Premier League table like this again.’ 🤤 pic.twitter.com/JqEOfTybOw