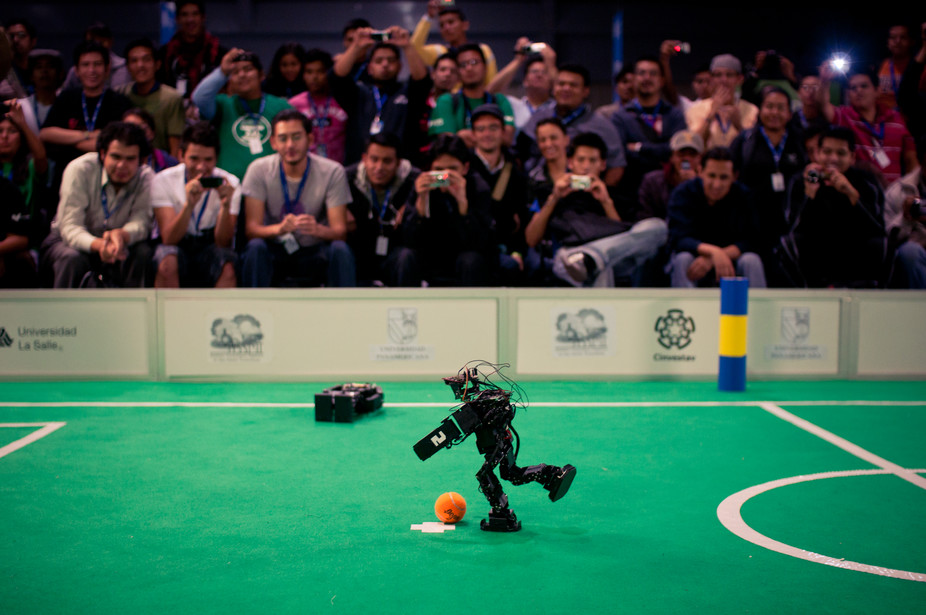 4-4-2 Becomes 0101: Inside The Computing Competitive World Of Robot Football

A star player can’t afford to short circuit under pressure.

The whistle has just been blown on one of the most thrilling events on the international sporting calendar. It took place in Brazil and pitted teams from all over the world against each other, each hoping to make it into the history books. But no managers were fired, no grass had to be watered and certainly no one got bitten.

The event was the Robocup, a tournament that sees professional footballers replaced by robots. It’s one of a number of regular tournaments for teams of programmers and robotics experts to show off their latest work.

The Robocup standard platform league matches play out on a much smaller scale than your average World Cup match. An arena of around 6 metres by 9 metres is marked out as a miniature pitch and 10, rather than 22 players file on to battle it out. The players are NAO robots, state of the art bipedal humanoid robots which stand about 60cm tall.

This is not what you might describe as a high-speed contest. The robots walk to take a kick or a tackle and, really, waddle might be a more apt word for their approach. The ball never gets lofted into the air and that’s probably for the best – a header might cause a serious malfunction.

But the game is far from boring. Sitting around the arena, boys and girls, with family standing behind, are rapt, cheering with every contact. And make no mistake, the robots are properly playing. They pass, position and defend just like human players.

On either side of the pitch a row of desks can be found. This is where the brains behind the teams sit. Behind a row of laptops, they anxiously watch their players perform. But they are not controlling the robots. These coder/managers send the command to start the players when the referee signals kick-off but during the match the robots are completely autonomous.

This is what makes robot football so extraordinary. The robots are not just being moved around the pitch by remote control; they are making their own decisions. They control where they run (or waddle), pass the ball and shoot for the goal without any live direction from a human. Their choices are based on what they see and the position of the ball, their teammates and the opposing team.

It’s what’s inside that counts

While a team of human players often comes complete with a dazzling array of ridiculous haircuts and tattoos, it is much harder to tell a team of robots apart. All the players are physically identical – the only visible differences on a robot football pitch are coloured markings to differentiate the two teams.

But appearances can be deceptive. Under their plastic skins the teams are far from the same. Each runs completely different software that has been painstakingly crafted by the team coders. The software to make these robots play football cannot be downloaded from an app store. It has to be crafted from scratch. Football is a complex sport and there are potentially limitless strategies that a team could use to win. This is hard-core coding.

The contest is, in effect, a battle of software. All things being equal – and at the moment they pretty much are – the team with the smartest programming, coding the cleverest plays will emerge victorious.

At the end of the first-half the robots are brought to a halt. At this point, the team coders can be seen furiously attacking their laptops. This is their chance to quickly modify their robots’ software after seeing how they performed in the first half. They might have as little as ten minutes to do it, which seems like a risky strategy.

There’s a chance that the coders could make a mistake that renders the robots incapable of doing anything at all, let alone play a better game, but it’s a chance worth taking. If, in the first-half, the other team breaks out some nifty new moves, running rings (perhaps literally) around their opponents, this is the best opportunity the coders will get to raise their team’s game. It’s the robot equivalent of the tough talking in the half-time dressing room.

It’s easy to see why Robocup and the FIRA world cup, the two major international competitions, are so successful. Both contests have been running since around 1996. Some teams enter every year, building tremendous experience and a sophisticated code base. And several world-leading research groups use these contests as a test-bed for new approaches to multi-robot collaboration, publishing their findings in leading robotics journals afterwards.

As a robotics competition robot football ticks all the boxes: a game with universal appeal yet also hugely demanding for robots; it’s a fun way for young roboticists to learn robot programming, and it’s a great spectator sport too.

(THE AUTHOR, ALAN WINFIELD, IS A PROFESSOR OF ELECTRONIC ENGINEERING, UNIVERSITY OF THE WEST OF ENGLAND. THIS ARTICLE WAS ORIGINALLY PUBLISHED IN THE CONVERSATION.)