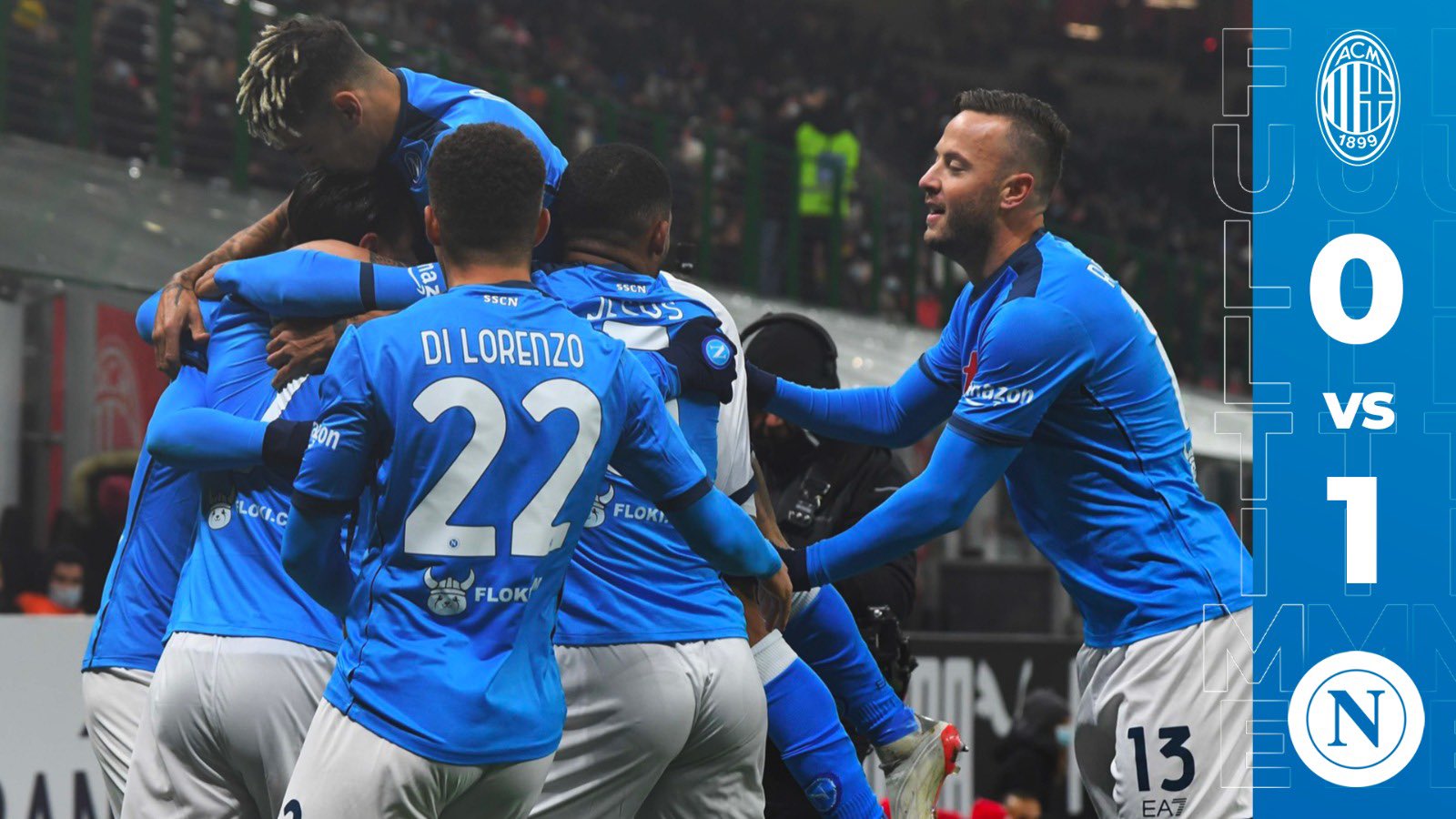 Luciano Spalletti’s Napoli climbed up to second place against AC Milan thanks to a hard-fought 1-0 win thanks to an early Elif Elmas goal. Napoli overtook Milan and are now just four points behind leaders Inter Milan.

The away side got off to a blinding start as they immediately put Milan under pressure. Their bright opening got them the early goal in the contest as well, thanks to some questionable defending from the home team. Piotr Zielinski swung in a good corner and Elif Elmas had far too much room just outside the six yard box to head the ball past a helpless Mike Maignan.

Milan struggled to get off the blocks as André-Frank Zambo Anguissa had another chance after they failed to clear a corner properly just a few minutes later. That one though was blocked in the box, thanks to Stefano Pioli’s relief. Napoli seemed to be happy with the one goal lead and let the Rossoneri have the bulk of the possession.

Pioli’s side struggled to break down the deep Napoli defence, with the side far too static in the final third. Junior Messias was the most dangerous man for Milan as they hoped rather than worked for a goal. The closest they came was in the 34th minute when Alessandro Florenzi connected well with a half-cleared set-piece. However, his volley flew agonisingly wide past David Ospina’s post.

The Neapolitans offered some threat on the counter with Chucky Lozano looking like a good outlet. He had two shots well blocked in quick succession by Alessandro Romagnoli and Fikayo Tomori. On the other end, Juan Jesus marshalled the Napoli defence well to ensure that his side went in to the break a goal up.

Down but not out; there's plenty of fight left for the second half 💪

The second half followed the same pattern of a fast start before settling into a lull but this time it was Milan that was came out sharper. Ibrahimovic nearly drew things level within five minutes of the restart but was denied by a strong hand at the near post by Ospina. Messias was the next one to test the Napoli goalkeeper from range but that save was much more comfortable.

The same patterns emerged but Napoli did seem to be more willing to go for the second goal but were continuously denied by Tomori who had an excellent game at the heart of the Milan defence. The Englishman was in the right place at the right time to foil Spalletti’s men and was also the starting point of most Milan attacks.

Pioli rolled the dice with a double change, throwing on Alexis Saalemakers and Olivier Giroud to push for the equaliser. Their best bet though continued to be Messias who tried his luck from distance again but his well struck shot was well over. Milan continued to struggle to create chances as time ticked on and their best chance arguably fell to Ibrahimovic due to a sliced clearance from Anguissa but the Swede’s control let him down and he did not get his shot away.

That is, until the 90th minute, when Frank Kessie thought he had equalised for Milan. A long ball forward was won by Giroud and the loose ball rebounded to Kessie who calmly finished and wheeled away in celebration. However, the Rosonerri hearts were broken as Giroud was judged to be offside during the rebound in the box while on the ground and the goal was ruled out.

⏱️ 90'
Kessie has a goal ruled out, with @_OlivierGiroud_ adjudged to have been in an offside position ❌#MilanNapoli 0-1 #SempreMilan

That was the last piece of action as Napoli got the three important points and here are our talking points from the encounter.

In such an important fixture, one would be forgiven to have expected more goal-mouth action. However, both sides were clearly reeling from a string of injuries and the make-shift lineups were underwhelming at best. Milan were without the services of Simon Kjaer and Davide Calabria in defence and Ante Rebic and Rafael Leao in attack. The absence of four first-team players was visible as they looked uninspiring in attack and uncomfortable in defence.

(And no, Insigne doesn’t count) pic.twitter.com/N8RJ46C1vR

Napoli too had four major players ruled out – Kalidou Koulibaly and Victor Osimhen are long term absentees while Fabian Ruiz and Mario Rui also missed out. In-form man Dries Mertens was only fit enough for the bench. The Naples side though were more compact, and after their early goal comfortable for most of the match. Given the circumstances, the means did not matter for either side only the end did.

Although they were aided by two misfiring attacks, the defence of both sides would be proud of their performance. Milan started on the wrong foot but quickly got their act together at the back. Tomori in particular stood out and the Napoli attack barely got a whiff on the counter attack after taking the lead.

For Napoli, Juan Jesus and Amir Rrahmani were brilliant in keeping the Milan attack at bay. They dealt with the physical Ibrahimovic and later, Giroud, well and dominated the defensive third. Despite the scrap, it is a good foundation for both sides to build on.

WHO WILL STOP INTER?

This weekend turned out to be a big one in the race for the title as Milan’s loss, combined with Atalanta’s on Saturday, meant that Inter opened up a four point lead at the top for Inter Milan. The Nerazzurri are in ominous form and the challengers seem to be stumbling. Both Milan and Napoli have dropped several points in recent weeks and Atalanta’s gung-ho style often sees them combust in games as they did against Roma.

It is clear that the chasing pack needs reinforcements in the coming January transfer window if they are to mount a title charge. Milan could do with a bit of creativity in attack while Napoli need to add to their attacking depth. If the sides play their chances right then they are in with a shot, otherwise it could turn into another procession to the Italian crown for Inter.