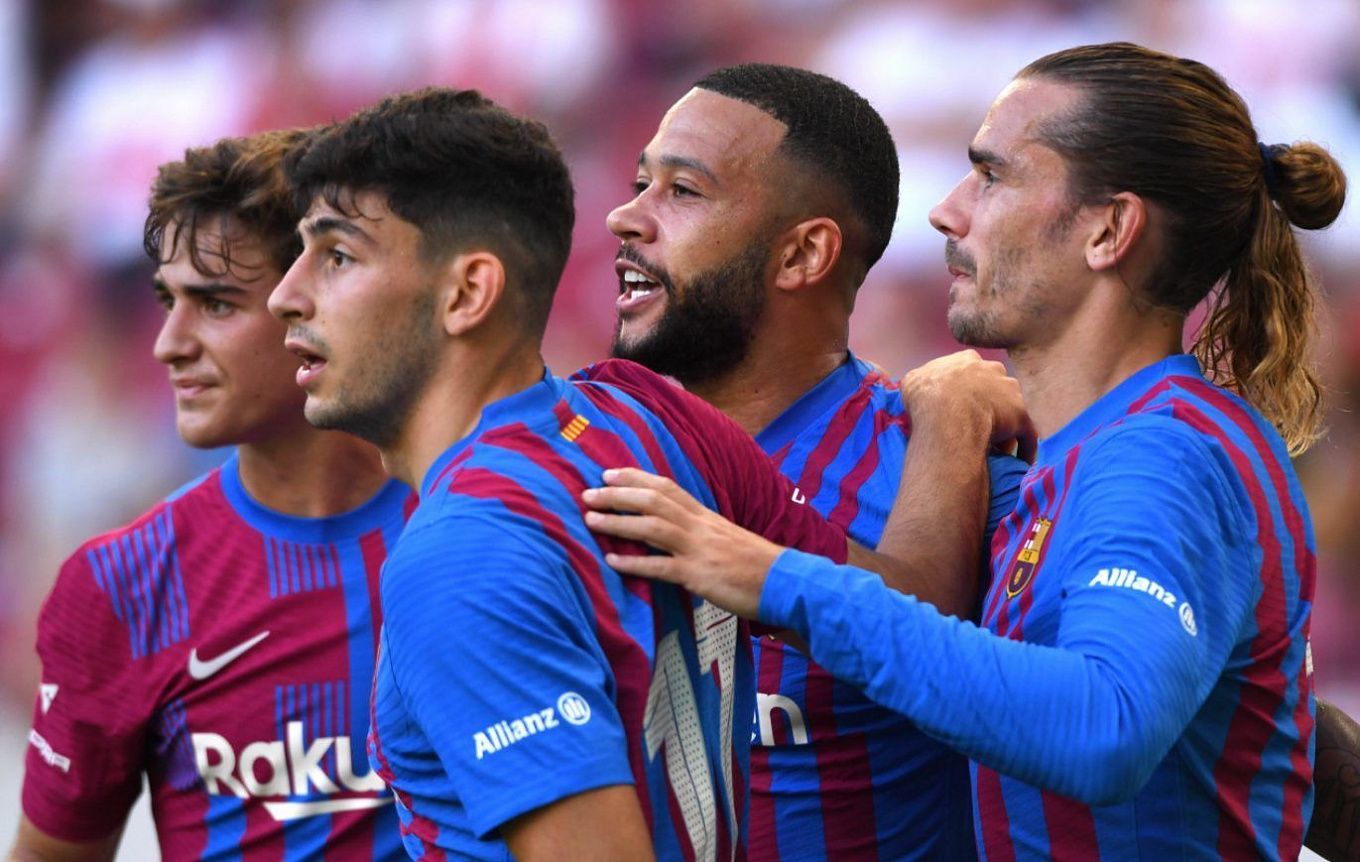 Barcelona hosted Real Sociedad in the first match of the “post-Messi” era. The Blaugrana had been able to register Memphis Depay, Eric Garcia and Reyaj, two of whom started. Sociedad themselves had David Silva and Mikel Oyarzabal both starting as well.

Braithwaite had the first chance of the match within 40 seconds, shooting straight at Remiro from a tight angle. A short corner found its way to Griezman who volleyed over with Barcelona clearly dominating proceedings. The Frenchman had another chance from the next corner, heading onto the top of the bar this time. The opening goal did indeed come in the 19th minute. A free-kick was whipped in by Depay and it was nodded in Pique who was left unmarked in the box.

Sociedad were struggling mightily as Barcelona looked for a second goal. A delicious ball over the top found Braithwaite who squared it for Depay but he was quickly smothered by Remiro. The away side slowly grew into the game as Barcelona’s high press subsided a bit with Oyarzabal and Portu getting in behind the defence at times. Just when it seemed like they would score, Barcelona hit back again. Having won the ball off Sociedad, De Jong’s cross from the right was headed in by Braithwaite at the back post to give his side a 2-0 lead at halftime.

Alba found himself one-on-one with the goalkeeper within the first five minutes of the restart, shooting wide as Barcelona were on the front foot. That was immediately followed by three half-chances for Sociedad with Oyarzabal looking the most likely to create something. That proved to be short lived as the Blaugrana knocked in a third.

Depay’s clever pass set off Alba down the left whose dangerous cross was palmed away by Remiro. Unfortunately for him, the ball fell straight to Braithwaite who crashed home his second of the night.

The first Dane EVER to score a double in #LaLigaSantander! ✌️

Merino tested Neto at the other end with Sociedad looking to score at least once on the night. The game settled down after that as both teams started making changes. Pedri’s snap shot was well touched over the bar by Remiro with Barcelona chasing a fourth. What did happen was a goal for Sociedad. Barrenetxea’s pass across through the middle of the Barcelona defence found Lobete who swept it home.

One soon become two. Nico Gonzalez gave away a free-kick in a dangerous position having just come on and Oyarzabal’s mastery proved too much for Neto. 3-2 with five minutes to go and Barcelona were looking very much like the Barcelona of last year. Griezman nearly nicked in a fourth after some sloppy play from Remiro but the danger was averted. However, following a breakdown in Sociedad’s attack, Braithwaite ran away on a fast break and his cross was touched into the net by Sergi Roberto.

There were to be no more goals in the remaining three minutes as Ronald Koeman’s side start the season with a win.

The Dutch striker, having only been registered days before, looked in inspired form right from the off. He was proving to be a handful for his markers with his free roam all over pitch. Depay was dropping deep as well as making runs into the box and set up Braithwaite for the first chance of the match. Though Griezman came close to breaking the deadlock, it always seemed like Depay would have a role to play. Indeed, it was his whipped in delivery from a free-kick that found Pique for the first goal. He himself tested Remiro twice and looked lively throughout the first half.

50 – Gerard Piqué 🇪🇸 has scored his 50th goal for @FCBarcelona in all competitions (22 headed goals), becoming the second defender to reach this milestone for the club after Ronald Koeman 🇳🇱 (88). Icon. pic.twitter.com/FE4agvV5kZ

He was at it again in the second half as well. His sumptuous flick found Alba in space whose cross was poorly pushed away by the keeper before Braithwaite scored his second. Depay’s positional fluidity was causing havoc as the defence was never quite sure from which side he would attack. He was substituted near the end of the match after a fine evening’s work.

NOT QUITE FOR SOCIEDAD

Great things are expected of Imanol Alguacil’s side who finished 5th last term. However, the first half was utterly dismal for them and without Isak, provided no meaninful threat up top. The Swede who scored 17 goals last season is a big miss and in his absence, they toiled to get their shots away. The defence was shoddy as well, conceding both goals through unmarked Barcelona players in the box. It was evident that a different kind of setup was needed and that resulted in a double change at halftime.

That helped them take the game to Barcelona better in the opening minutes of the second half. But some poor play at the back saw them go 3-0 down. However, they refused to back down with two quick goals setting the stage up for a grandstand finish. Just when it looked like they would score a third to draw level, Barcelona hit back with a fourth that put the game to bed.

It is no surprise that Barcelona fans were extremely unhappy with the way Messi’s departure was handled by the club. Shirt sales have gone down, so has ticket sales  for the first match. There was a cheer for Messi during the 10th minute of the match as has been reported will happen over the full season. However, the second half saw a slight change with most fans chanting “Barca! Barca! Barca!” this time as their side led 2-0. Could this be a sign of changing tides slowly? If Barcelona keep up performances like tonight, it will be soon.