MESSY BUSINESS FROM THE CATALANS 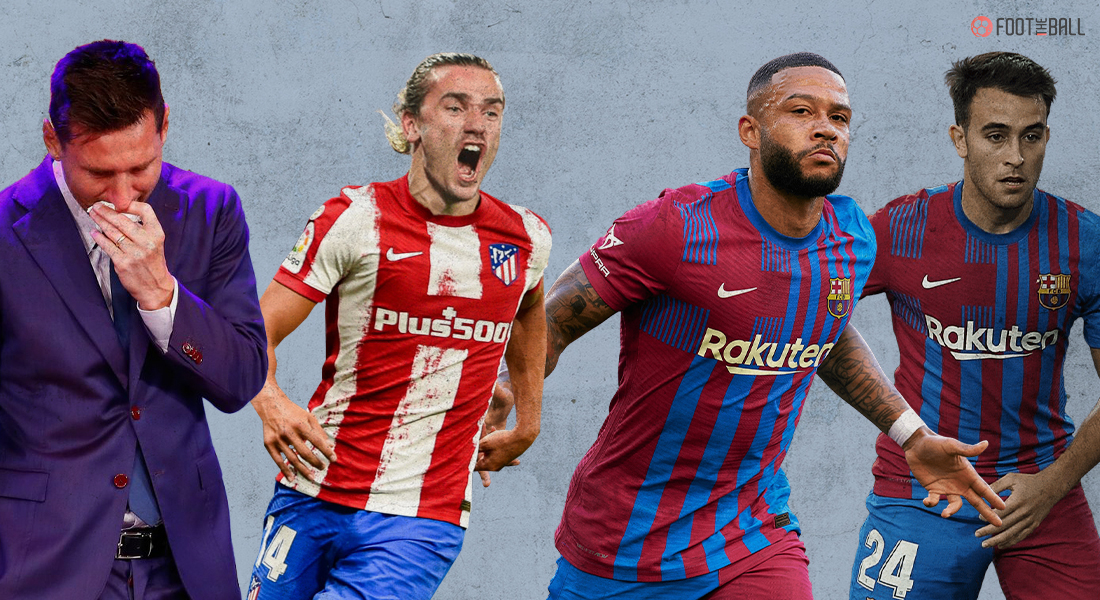 Barcelona have been involved in one of the biggest transfers of the century this transfer window. Contrary to popular belief and the usual norm, they were on the receiving end of it as their heart and soul left the city. Lionel Messi wasn’t able to renew his contract due to the La Liga wage cap and joined PSG as a free agent. This being the highlight of the window, they captured some high profile names in the window as well.

Barcelona’s hands were tied in this transfer window. Due to gross mismanagement by the previous board headed by ex-President Josep Maria Bartomeu, they were buried under a mountain of debt. They splashed the cash on unnecessary deals and had a hugely inflated wage bill that disrupted the club’s economical balance. These misdeeds from the past came back to haunt them as Lionel Messi’s contract ran out.

They weren’t able to spend big in the window with a majority of new signings being free agents. Memphis Depay, Sergio Aguero and Eric Garcia were picked all signed along with Luuk de Jong on the deadline day as a loan signing. Emerson Royal was bought and sold in the same window in an attempt to raise profit.

Lionel Messi’s departure was a tear-jerker along with few others. Antoine Griezmann returned to Atletico Madrid on a loan on the deadline day. Junior Firpo, Carles Alena and Jean-Clair Todibo were all sold. Few promising youngsters were also sent on loan for their further development.

I want to thank the president, the whole board of Barcelona, the coach and my own team for making my dream reality.
I want to thank God more than anything else for guiding me through out my life!
I have no words to describe how I feel right now but I’m so grateful. pic.twitter.com/NxfBshuHwY

Memphis Depay was a long-term transfer target for the Catalans. The Dutch forward waited for his time and ran his contract down at Lyon to play alongside Lionel Messi at Camp Nou. Besides, his previous experience with Ronaldo Koeman for the Netherlands national team would’ve have made him feel at home. The versatile Dutch winger was seen as the missing piece in Barcelona’s attack. But as it turned out, Depay was signed but unfortunately, he didn’t get to meet Messi once as the Argentine left for PSG. Hence Depay was thrust into the deep end as he needed to be the main man in the new era for Barcelona. By the looks of it, he started brilliantly with two goals and an assist in three games. Depay can be the perfect signing for Barcelona if he can win them few trophies.

Similarly, Sergio Aguero was pulled on a free with the promise of playing alongside Messi. As Messi left, there were rumours of Aguero leaving too. But the Manchester City legend stayed put amidst an injury and is waiting to make his Barcelona debut. The Argentine’s incredible quality would bring lots of goals to the Catalans. Apart from Aguero, Eric Garcia was also signed from City on a free. The Spanish centre-back impressed during pre-season and can be Gerard Pique’s long term heir.

Yusuf Demir, an impressive Austrian was signed for the academy initially. But the youngster’s game in training impressed Koeman to promote him to the first team. Luuk de Jong was signed on deadline day on loan from Sevilla to replace Antoine Greizmann who headed to Atletico on loan. Emerson Royal was bought from Real Betis to be the first-choice right-back but was sold at the first chance.

None of the departures are bigger than the one of Lionel Messi. The financial mess and the wage cap rules meant Messi couldn’t re-sign with the club even after taking a reported 50% pay cut. Other players like Pique and Sergio Busquets took pay cuts as well but it wasn’t sufficient for Messi’s registration. Hence the legendary Argentine who spent his entire career at Barcelona had to leave as a free agent. The entire city of Barcelona was weeping as their best player left them.

There were other departures too in the window. Credit had to be given to Barcelona for making a profit on Emerson in no time but it was harsh on the player. He was bought from Betis and was later sold to Spurs for a profit of around €10 million. Junior Firpo, a backup to Jordi Alba was bought by Leeds. Todibo made his stay at Nice permanent after a fruitful loan spell. Similarly, Alena too made his Getafe move permanent.

Youngsters like Ray Manaj and Franciso Trincao were loaned to Spezia and Wolves respectively with an eye for the future.

Barcelona, in an attempt to cut their wage bill, acted ruthlessly. Matheus Fernandes’ contract was terminated and he went to Palmeiras on a free. On the deadline day, Antoine Greizmann made a shock loan move to the defending champions Atletico Madrid. After two years at Camp Nou, just when he got his big breakthrough at Camp Nou, the French striker was shipped off. Also, Miralem Pjanic, another veteran, joined Besiktas on a loan.

Mann, what a day.

Barcelona did what they could with shackles on their hands. But in all true sense, they have few gaps in their squad. A full-back and particularly a left one at that was their pressing need. They sold the current backup Junior Firpo and failed to replace him meaning Jordi Alba has to be available all the time. On the opposite side, the onus is on the youngs Sergi Dest to perform at a world-class level.

A creative or a robust box to box midfielder was also required. Barcelona were the favourites to sign Georginio Wijnaldum, the Dutch international on a free from Liverpool. But their inability to meet Wijanldum’s wage demands made PSG swoop in for him. This means they have to bank on the same midfield options as the last year.

It means Sergio Aguero can be registered ✅https://t.co/EYZdKOVKdc

Though they have lost Messi, the squad looks strong enough to compete for La Liga and Champions League.

Barcelona’s major success in this window must be cost-cutting. Through pay cuts of main players and shipping off of deadwood, they have restocked their coffers. With the pandemic receding, their revenues would pick up eventually. All these signs lead to a big summer splash from Barcelona in the next transfer window.