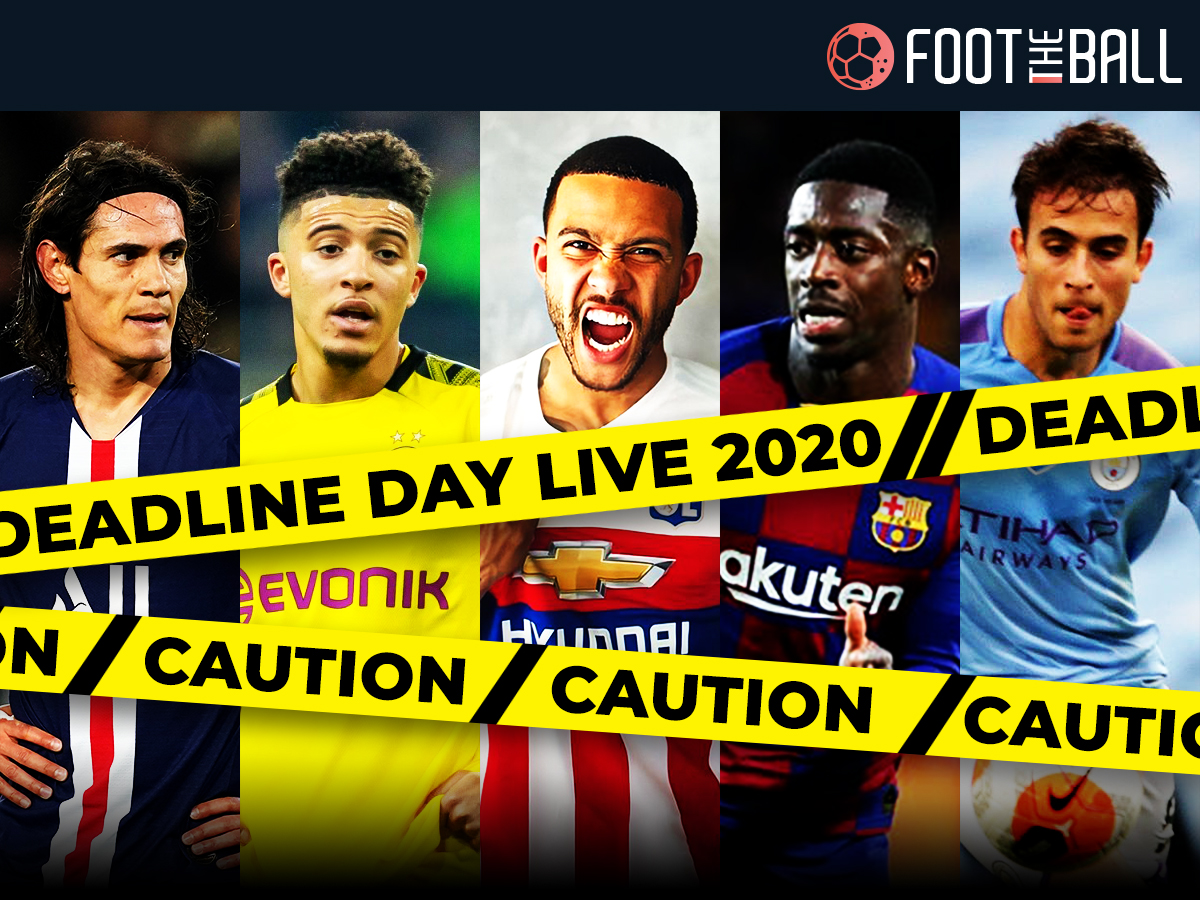 FootTheBall got you all the dope on the craziest deadline day deals across Europe for the 2020 summer transfer window – as they happen!

Welcome to the Partey! 🥳

Cavani to Manchester is official!

Eric Garcia is €20 million or off the Table!

Something for the Gunners

Atlético Madrid board have received the notification 1 hour ago from Arsenal for Thomas.#AFC are set to trigger the release clause for €50m tonight, race against time then… here-we-go ⚪️🔴

Diego Perotti has completed a move to Fenerbahce

Diego Perotti has completed a move to Fenerbahce.

Thank you for everything, @D_10Perotti – and good luck with this new adventure! 💛❤️ #ASRoma pic.twitter.com/0J7ufCapMW

Time’s Up for Germany

The transfer window is closed in Germany! 🇩🇪

But RB Leipzig got a late move over the line for Patrick's son…https://t.co/qwa3giu6Mm

Ronald Koeman to NOS: “We want Memphis Depay at Barcelona and he wants to join Barça too”. Démbélé deal with Manchester United is key to complete the agreement. Barça-OL deal [€25m + add ons] for Depay is almost ready to be signed if #FCB will sell more players. 🔴 #DeadlineDay https://t.co/bPDRWTpbfd

Man United Fans have got their hopes up

Démbélé did not train with Barça today, as per @moillorens. He’s open to join Man Utd – talks on between #MUFC and Barça but still no agreement.

Another hour; Another Transfer Target for United

Manchester United want to sign Ismaila Sarr on loan today, but Watford are only open to a permanent deal, according to The Athletic 🧐#DeadlineDay pic.twitter.com/ny3XPC2tMe

Manchester United are in talks to sign a teenage winger… 👀

Klaassen is Officially Back

Udinese are in talks with Watford over a loan deal for Gerard Deulofeu, according to Sky in Italy.

Watford forward Ignacio Pussetto is also expected to complete his return to Udinese.

The 24-year-old only arrived at Vicarage Road from Udinese in January. (SKY)

Costa Out and Chiesa in for Juve

…and Gerard Deulofeu is joining Udinese from Watford. Done deal and here we go! 🚨 #WatfordFC #DeadlineDay

Dembele to Manchester United is happening

Barcelona currently negotiating the terms of a deadline-day transfer of the France international to the Premier League. https://t.co/BJyzQtijhB https://t.co/5Ifw7UGrOM pic.twitter.com/TParo3cve0

Lemar is on his way out of Atletico

Thomas Lemar in talks to leave Atletico Madrid as one of three potential departures #DeadlineDay https://t.co/dDJJQoGrqt

Arsenal have made a move for Thomas Partey. Story to follow.

Hertha BSC has found a successor for Karim Rekik (25), who is about to move to FC Sevilla. Omar Alderete (23), who had a strong first year at FC Basel, should move to Berlin on loan. (News source: Kicker)

Manchester United makes it three on the deadline day

Amad Traoré will join Manchester United on next January, here we go! Deal agreed right not with Atalanta but the young talent [born in 2002] will arrive on 2021 because of work permit and passport timing.

Walcott close to agreeing on terms with the Saints

Gunners looking to cash in on a few names

Fulham are in advanced talks to sign Joachim Andersen

Fulham are in advanced talks to sign Joachim Andersen from OL, after Jean Clair Todibo still not convinced about #FFC. ⚪️⚫️ #FulhamFC #transfers

'They're both at Carrington now undergoing their medicals.' ⏳

Schalke are set to sign Kilian Ludewig from Red Bull Salzburg, according to Sky Germany. The defender is currently on loan at Barnsley. #S04 #RBS

Rudy in talks with Hoffenheim for another loan move

As per Kicker, Sebastian Rudy might return to TSG Hoffenheim on loan for one year.

Newcastle aim to balance their books

Bayern rise on the deadline day

Sarr is currently having his, while Douglas Costa will have his in Turin before travelling to Munich.#FCBayern https://t.co/ISs0G8WUji

Besiktas in for Ghezzal

Leicester winger Rachid Ghezzal is in Istanbul undergoing a medical ahead of a season-long loan at Besiktas.

Costa is here to compete with Sane and Gnabry

Douglas Costa will sign as new Bayern Münich player today afternoon. Simple loan, no buy option. Medicals today authorized by Juventus. Man Utd have never been in talks with him, as Wolverhampton. He’ll be back to Bayern. Here we go confirmed. 🔴🇧🇷 #Bayern #DeadlineDay

Here we go!! – Telles is having his medical with Manchester United

Grujic may return to the Bundesliga

Werder Bremen are set to sign Liverpool's Marko Grujic on loan, according to Bild. #SVW #LFC

Ryan Sessegnon has joined Bundesliga side Hoffenheim on loan for the remainder of the 2020/21 season.

Inter won’t sell Milan Skriniar on last hours of #DeadlineDay and are not expecting another bid from Tottenham. It’s up to #THFC but very quiet right now. Inter are ready to keep him. ⚪️ #Spurs #transfers

The former England international left Saints to join Arsenal for £12m in January 2006 having made 21 leagues appearances as a 16-year-old during the first half of the 2005/06 season. (SKY)

Depay to Barcelona is Happening

Memphis Depay has agreed personal terms with Barcelona and could seal a move today, according to Lyon’s sporting director Juninho Pernambucano.

The Dutchman is expected to seal his move to Barcelona if they sell Ousmane Dembele, with Manchester United interested in the winger.

Memphis Depay will become a Barcelona player on Monday, according to @DiMarzio 🇳🇱 pic.twitter.com/5i2OXLFFAY

Telles finally on the way to Manchester United

After Brutal 6-1 defeat against Spurs yesterday, Manchester United in desperate need for a defender are finally looking to seal the deal with long time target-  FC Porto Left Back Alex Telles

Manchester United and Porto have reached an agreement for Alex Telles! Last details to be sorted on next few hours, then medicals and official announcement. Here we go soon! 🔴 #MUFC #transfers

Ajax are on the verge of signing former Everton midfielder Davy Klaassen, according to Telegraaf.

Klaassen is set to return to Ajax, after a £10m fee was agreed with Werder Bremen for the Netherlands international. (SKY)

Davy Klaassen back to Ajax from Werder Bremen, the agreement has been reached. Last details to be sorted on next hours. ⚪️🔴 #Ajax #transfers

Bayern Munich are finally about to land a winger! 🔜

Raphinha is supposed to be the latest addition to Bielsa’s army in the Premier League.

The 20-year Italian has made a move on loan. This could have possibly been done to fill up for Edinson Cavani who could be on his way out of Paris soon.

The reigning Bundesliga champions have signed Marc Roca from the Spanish club, RCD Espanyol on a five-year contract.

Edinson Cavani is on his way to Manchester United

FootTheBall expects other clubs to up their game as we look at how the final day of the 2020 summer transfer window may shape up.

Which club had the best summer transfer window so far?

Chelsea FC have reportedly spent a whopping £230 million this summer.

Is October 5 the Deadline Day for every league?