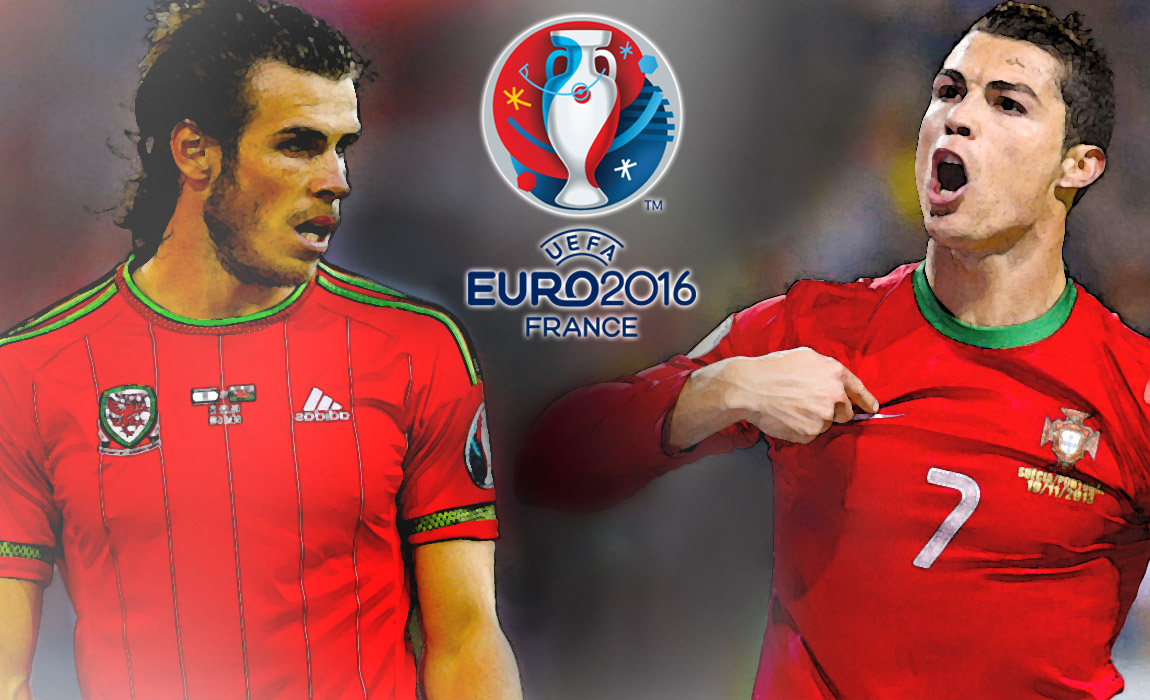 Wales face Portugal in the first semi-final clash of Euro 2016 at the Stade de Lyon on Wednesday, with a place in the final at stake.

Cristiano Ronaldo is expected to stand up to the occasion in Wednesday’s semi-final clash and he is just one goal away from breaking Michel Platini’s record of nine goals in the European finals. The Portuguese legend has already broken the competition record for the maximum number of appearances for a national side.

Wales started their Euro 2016 campaign with a 2-1 win over Slovakia followed by a 2-1 defeat in a high-octane clash against England. However they came back strong against Russia and clinched a 3-0 victory in their final group stage game. This has been the most glorious era in the history of Welsh football as they qualified for the European competition for the first time and has also made it to the round of 16 where they defeated Northern Ireland 1-0. Wales faced Belgium in the quarters and even after going down by 1 goal, they fought their way back as captain Ashley Williams, Robson-Kanu and Vokes scored to seal a 3-1 victory in the epic quarter-final.

Gareth Bale on Wednesday asserted that the semi-final clash against Portugal is much more than a duel between him and his Real Madrid teammate Cristiano Ronaldo. He also said that the Chris Coleman-coached Wales squad has all the potential to defeat any team in the world.

“It’s not about two players, everybody knows that, it’s about two nations, 11 men versus 11 men,” said Bale.

“It will be a very different game, they’re in the semis for a reason but we’ll enjoy the occasion as we have done.”

” Ronaldo is a fantastic player, everybody knows what he can do, but we speak about what we can do as a team.

“The teams we’ve played had very good individuals, but it’s about how we perform as a team and by doing that we can shut out a lot of threats,” he added.

“We’re responsible for writing our own history. History and tradition is important for people and countries, and that helps us here, but we’re writing a new chapter now. This is a gigantic step towards our goal against incredibly strong opponents. It will be complicated but we have the talent to win it.”

“It’s not about Cristiano v Bale, though. All four teams in the semi-finals and every player, they have the same goal. Wales are a very good side, technically gifted. I learned a lot from Jimmy Hagan [an English manager at Benfica when Santos was in his late teens]; the British school of football was very important to me. Wales are very good at it.”

“Wales have had an incredible campaign. They came through a tough group and beat Belgium, World No.2 Belgium 3-1! I greatly admire Chris Coleman – we spoke once or twice when he was in Greece. I understand why he says we’re favourites. I bet he doesn’t tell his players that, though.”

“We believe in each other. Portugal know what semi-finals are all about; we don’t mind being underdogs. It’s about my players knowing they are safe in each other’s hands – and they are. It’s taking that identity onto the pitch.”

“Everybody’s got good team spirit on a shiny day when they’re winning. But our team spirit was born in the dark days when things weren’t so rosy. It’s down to the players. Even if you’re the best coach in the world, if you haven’t got the players who can go out on the pitch and do it, then it’s for nothing. I’m lucky.”

Wednesday’s semi-final clash will be the fourth head-to-head encounter between the two teams. The teams first met in a friendly in 2000 where Portugal won 3-0.

All the three previous encounters were friendlies and Wednesday’s semi-final clash will be their first ever competitive fixture.

Portugal have never lifted the European title but they have played the most number of games in the history of the European Championship: Games – 33, Trophy – 0. They reached the finals against Greece in 2004, but they lost 1-0.

Under the mentorship of Fernando Santos, Portugal are yet to be defeated in their last 12 competitive fixtures. (Wins-8, Draws-4).

This has been the most glorious era in the history of Welsh football as they qualified for the European competition for the first time and has also made it to the semi-finals by outplaying Belgium in the quarters.

Previous best performance of Wales was in the 1958 World Cup, where they were knocked out in the quarter-finals against tournament winners Brazil.

Wales are second in the list of most goals scored at Euro 2016. France tops the list with 11 goals followed by Wales with 10 goals.

Cristiano Ronaldo with 19 appearances, has already broken the tournament record for the maximum number of appearances for a national side. He is just one goal away from breaking Michel Platini’s record of nine goals in the European finals.

Ronaldo has failed to find the net from a total of 41 direct free-kicks at major tournaments
(Euros and World Cups). On the contrary, Wales star Gareth Bale has scored goals from a total 5 free-kicks taken by him at Euro 2016.

Renato Sanches have become the youngest player to score in the knock-out stages of a Euro tournament (18 years and 10 months).

Hal Robson-Kanu has scored as many international goals in his last four games with Wales as he had in his previous 30.

Real Madrid centre-back Pepe who anchored the Portugal defence in Euro 2016 is an injury concern and seems doubtful to feature in the semi-final clash against Wales on Wednesday.

Pepe has been the first choice for Fernando Santos in all the matches that Portugal have played in their Euro 2016 campaign. The star defender played the entire 120 minutes as Portugal outplayed Poland 5-3 on penalties in the first quarter-final encounter of Euro 2016.

If Pepe fails to recover from a muscle sprain, former Chelsea defender Ricardo Carvalho is expected to take his place as a centre-back in Saturday’s high-octane semi-final.

Both Arsenal midfielder Aaron Ramsey and Tottenham defender Ben Davies will not be available as they have picked up their second yellow card of the tournament in the quarter-final clash against Belgium.

It is expected Leicester City midfielder Andy King will step into the shoes of Aaron Ramsey, to take control in the midfield in the high-octane semi-final clash.