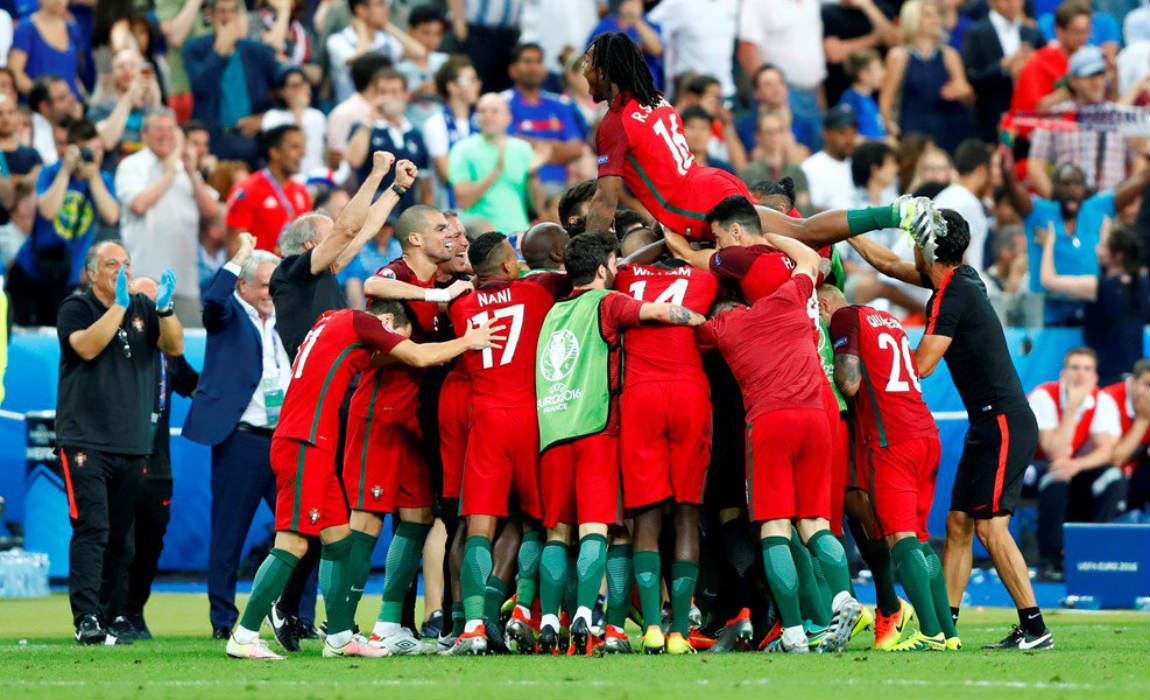 France came, Sissoko played but Portugal conquered as king Eder scored the biggest goal of his career to sink a dominating Les Blues at Stade de France in Paris with a miracle strike.

Eder’s late goal in the 109th minute helped Portugal to beat France 1-0 in the final of Euro 2016 at Stade de France.

Moutinho picked Eder who cut to the right before launching a right footed shot from 25 yards to beat Lloris at the near post.

Portugal's name is on the Henri Delaunay trophy for the first time!#EURO2016 @selecaoportugal #POR pic.twitter.com/KRN9v5EpT8

Portugal created history as they were crowned the champions of Europe for the first time in seven appearances.

Both the teams started on a positive note but France chose to push more bodies forward in the opening minutes of the game, leaving open spaces for Portugal to raid on the counter.

Portugal failed to match the intensity that hosts France introduced in the opening minutes. France dominated possession and looked to dominate through the flanks with Greizmann taking charge up front.

France had a golden opportunity to open the account in the 9th minute but Greizmann’s header from the centre of the box was saved in the top left corner by Patricio. Atletico Madrid striker got on the end of a cross from the left before launching a header, which was acrobatically kept out by Patricio.

France dictated the tempo and looked desperate in their continued search for the opener while Portugal chose to play deep and were restricted at their own half.

Here's how Ronaldo injured his knee and got stretchered off before halftime: pic.twitter.com/6vMEceFsQb

Situations became worse for Portugal when a knee jarring foul from Dimitri Payet in the 16th minute, ended CR7’s stay on the pitch.

The Real Madrid hit-man threw his armband in disappointment before dropping down to the ground as he was unable to continue in one of the most crucial matches in his career.

The medical staff did their best to patch him up as Ronaldo made his way back to the pitch but was unable to continue as he dropped down to the ground in disgust before being carried away. Portugal introduced Ricardo Quaresma to replace their captain.

France worked the ball all over the pitch with Payet, Pogba and Matuidi dominating the midfield with Giroud and Greizmann dominating the play up front at the half hour mark.

Deschamp’s men had another golden chance to take the lead in the 34th minute as Sissoko got on the end of a clinical pass from Payet, before firing in a venomous strike at the near post which was sensationally kept away by Patricio.

Potugal’s first proper build up in the game came in the 38th minute when Sanches and Nani linked up in the final third but Guerreiro’s left footed shot from outside the box was blocked.

France maintained the pressure on the Portuguese defense but they lacked the finishing in the final third with Portugal choosing to put all their men back to prevent France from taking the lead.

Both the teams failed to break the deadlock but France were clearly the better team as the match reached the half-time break.

France continued their raid after the restart but despite having the best chances in the game they lacked the finishing on the final ball.

Payet skipped beyond two defenders with an impressive bit of footwork and rushed into the penalty area in the 48th minute, but just as he trigger an effort on goal, Fonte made a crucial interception to keep the danger out.

Portugal Coach Santos was an ever present figure in the touchline, instructing his players to maintain the shape at the back as France looked to infiltrate down the middle banking on the playmaking abilities of Payet and Pogba.

Sissoko’s strike from the edge of the box was comfortably saved by Patricio at the centre of the goal in the 50th minute.

Pressure started to mount on the Portugal defence and Antoine Greizmann had the best chance in the game to break the deadlock in the 66th minute as he got on the end of a cross from the left, but his header from the centre of the box went inches over the bar, the roof of the net.

Patricio was tested all throughout the match but he proved his mettle with some incredible saves to keep Portugal in the game.

Patricio acrobatically dived down to his left in the 75th minute to deny Giroud’s left footed shot from the left side of the box in the bottom left corner.

Portugal looked to break the shackles in the last quarter of the game as former Manchester United winger Nani had his best chance in the 81st minute but his well-timed strike was punched out with a diving effort from Lloris. Quaresma pounced on the rebound to launch an overhead kick which Lloris manged to parry.

France pushed the tempo further in the final minutes of the game and threw more bodies forward but Sissoko’s right footed shot from the edge of the box was saved by Patricio, who dived across to his right to parry the long-range effort.

Portugal showed some sparks in the dying minutes of the game but they felt the absence of their captain, as they felt to lodge an effort on target.

France almost put the game to bed in the 91st minute but they were unlucky as Gignac’s right footed shot from a difficult angle smacked off the inside of the left post and stayed out as the match headed towards extra-time.

France had the upper hand in the first half of extra-time but the best chance came begging at Portugal’s end in the 103’ minute. Eder deceived his marker in the area and got on the end of a corner before thumping a header which was saved by Lloris.

France deployed all that they had in their arsenal in the dying minutes of the game, but failed to penetrate the rock-solid Portuguese defense, who managed to hold on to their nerves.