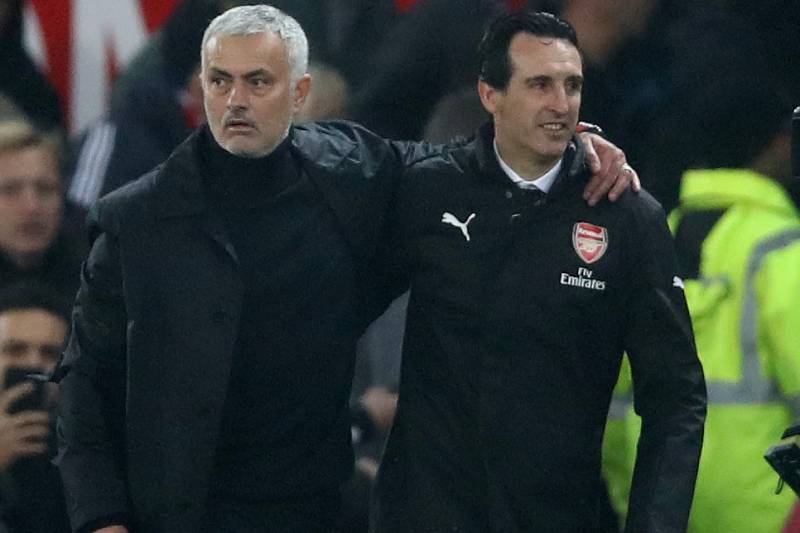 Premier League: Could Replacing Unai Emery With Jose Mourinho Get Arsenal In The Top 4?

Arsenal did not generate a ton of preseason buzz when it came to challenging for the Premier League title. Most oddsmakers viewed the domestic race as a 2-horse derby between Manchester City and Liverpool. Through 11 games, that has proven to be an accurate prognostication.

While oddsmakers did not necessarily take Arsenal seriously as a title threat, most did still expect Unai Emery’s side to fight for a place in the top-4 of the table. The Gunners enjoyed a strong second half of Emery’s first season at the helm, and the club’s maneuvers over the summer led to some optimism regarding their hopes at getting back into Champions League.

However, the team has stumbled out of the gates. The Gunners are just 4-5-2 through 11 matches. Their 17 points is good for fifth in the league, though they are already 6 points adrift of fourth-place Chelsea. Leicester City, who have once again been the surprise of the league, are third on 23 points of their own. The Foxes’ goal differential (plus-19) is 11 better than that of the Blues, which is why Chelsea sit fourth.

Oddsmakers have essentially written off Arsenal’s chances of catching Liverpool or Manchester City at the top of the table, but they do still have a decent chance of sneaking their way into a top-4 spot in the Premier League. By using any of these sites you can get a good idea regarding how Arsenal’s betting odds have fluctuated amid their uneven start to the season. Betting on the winner of the Premier League comes down to City or Liverpool at this point. If you want to bet on the Gunners, the most actionable odds are their chances of finishing in the top-4 of the table.

Could Emery Be Sacked?

Arsenal’s inauspicious early-season form has led to speculation that Emery could be on his way out sooner than later. Arsenal finished a point behind Tottenham for fourth in Emery’s first season last year, but the fact that the squad seems to have gone backwards in year 2 could be a red flag for the team’s decision-makers.

It also doesn’t necessarily bode well for Emery that one of the most decorated managers in the history of the game is currently unemployed and looking to get another opportunity. Jose Mourinho, who was sacked just under a year ago after a tumultuous stint at Old Trafford, has made it known that he would have interest if the Arsenal job were to become available.

However, Arsenal have attempted to distance themselves from Mourinho rumours with Emery still occupying the team’s managerial post. Mourinho would reportedly have interest in speaking to the Gunners if Emery were to be sacked during the season. It was reported by some outlets that Mourinho was seen having dinner with Arsenal head of football Raul Sanllehi, but ESPN FC reports that no meeting between the men actually happened.

Dumping Emery now may well be what it takes to make Arsenal a viable betting option to improve their standing in the Premier League. It’s certainly no guarantee that a managerial change would galvanize the squad, but the team’s brass has to make a move in order to change the trajectory of the team’s season. With other big clubs like Tottenham and Chelsea enduring relatively mediocre campaigns of their own, Arsenal cannot afford to miss the chance to take advantage.

Arsenal’s discouraging draw at Wolves on Saturday has caused the chorus of Emery dissenters to become a little louder. After the game, Emery told the press, “I’ more demanding of myself and feel a responsibility to work and come back better.” Emery’s contract expires after the season, though there is an option to add one more year if the club were to accept it.

Emery dodged questions about his potential sacking, responding, “We speak about how we can improve and how to achieve the best performance.” It may sound rash, but I don’t love the chances of those Arsenal top-4 bets cashing if Emery is retained for the duration of the season.

Mourinho’s Track Record Speaks for Itself

Mourinho would have the chance to become one of the few managers to win trophies with 3 different English clubs. The self-anointed “Special One” has won the Premier League 3 times across 2 different stints at Chelsea, and he led Manchester United to EFL Cup, UEFA Europa League and FA Community Shield wins during his time at Old Trafford. The 56-year-old has also made stops at noteworthy clubs like Inter Milan, Porto and Real Madrid over the course of his decorated managerial career.

Hiring a manager with the résumé of Mourinho would make Arsenal quite a bit more appealing from a betting perspective for the rest of the season. If they keep Emery, the club risks stagnation.

While he would have interest in the Arsenal job, Mourinho has also been linked to the Bayern Munich position. The German giants parted ways with Niko Kovac after yet another disappointing result dropped the club to just fourth in the Bundesliga table. Bayern are still only 4 points adrift of the league lead, and whatever new manager comes in will be tasked with getting Bayern back to the top.

Whether Mourinho would have interest in going to Germany has not been reported.

Emery, who has spent most of his managerial career in his native Spain, was the head man at Paris St. Germain before taking the Arsenal job prior to last season. Emery was faced with the tall task of replacing Arsene Wenger at the Emirates, who is one of the most prolific coaches’ English football has ever seen.

Arsenal’s betting odds have obviously come down to more profitable levels with their so-so start to the campaign. The Premier League campaign doesn’t end until next May, though, so there is obviously more than enough time left for the Gunners to make something of this term.

Mourinho has taken teams worse than the squad Arsenal currently have and transformed them into juggernauts. There is obviously no shortage of talent in the side right now, which is why the Gunners were such a hot Premier League betting commodity in the first place. Their bad start to the season may have caused some anxiety among those that did place bets on Arsenal to finish near the top of the league, but there is still potential for a turnaround.

Mourinho likely would not be able to fix what ails the Gunners right away, but his appointment would, at the very least, give the side a much-needed jolt. The team seems to have stagnated under Emery and replacing him with Mourinho would make Arsenal a much more appealing bet to finish in the top-4 of the Premier League table. There is enough time left in the season for the Gunners to make a move and hiring a proven talent like Mourinho would be a step in the right direction.