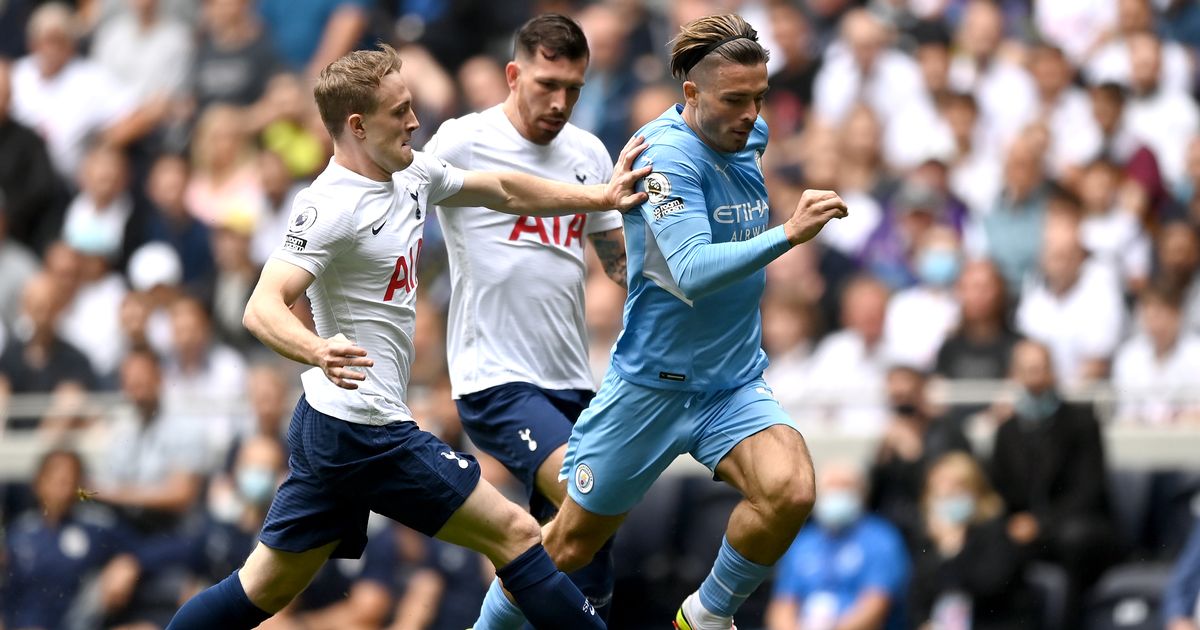 Spurs win 1-0 against the defending champions as Nuno Espirito Santo impresses the home fans to end the first game week of an eventful Premier League season so far. Manchester City starts the seoson in a similar fashion as they did last time but can they pull themselves back up this time around?

THIS IS WHAT IT MEANS. 😍 pic.twitter.com/koUAbDlJxW

The defending champions were looking forward to getting back up after their disappointing loss against Leicester City in the FA Community shield. The fans got to see Jack Grealish make his Premier League debut in a blue shirt as the expectations are high for the 100 million pounds worthy attacker. With Phil Foden and Kevin De Bruyne recovering from an injury, both weren’t included in the starting lineup by Pep Guardiola which is why Ferran Torres had the chance to shine for them upfront.

Half an hour gone here in London…thoughts on the game so far? 🤔

Spurs had a disappointing season as they finished 7th in the table and Nuno Santos is the man they have appointed to turn things around for them. The home fans were excited to see how their club look under the new boss and left the stadium happier than they came in. An entertaining but goalless half that surely made Spurs fans make a sigh of relief. The possession was dominated by Manchester City but Spurs too had their moments. In the end, nothing went off the script except Mahrez missing a good scoring opportunity in front of the gaol. Gundogan too saved Ederson from humiliation after he blocked the ball centimeters in front of a keeperless goal.

Heung Min Son scored an absolute banger in the 54th minute of the game inching closer to glory. Son fools Ake with a stepover at the edge of the box and then strikes the ball perfectly past Ederson burying the ball in the bottom left corner. The goal is surely one of the contenders for goal of the week.

The second half was far more eventful than the first and we got to see a better display by the home side. Spurs still had less possession but prevented City from getting close to the goal to make up for it. City struggled to contain the fast counter attacks by Spurs and hence were pushed onto the backfoot many times. City lacked the flair they usually have in the final

third and couldn’t muster clear goal-scoring opportunities. In the end, it was a well-fought battle but Spurs managed to get away with 3 points whereas Pep Guardiola was left with his head scratching.

Benjamin Mendy isn’t City’s first-choice left-back, but Guardiola has been giving him ample of opportunities to prove himself and Mendy has been failing them time and time again. The majority of Spurs’s attacks was on their right flank thanks to Mendy’s lack of defensive prowess. Mendy had the duty to keep Luca Moura under control but the attacker beat him on almost every time they dueled. Mendy also needs to be smarter while positioning in the backline.

Mendy was also nowhere to be seen when Son scored the opener finding the right flank wide open with Mendy missing in the equation. Although City’s game plan needs Mendy to play aggressively, he had plenty of time to track back and stop Son from taking the shot. This game was the last straw for Benjamin Mendy and he should probably be dropped during important league games.

A GAME WITHOUT CENTRE-FORWARDS

One of the unique factors of today’s game was that both sides were missing an out and out striker in their side. Son was playing as the center forward on paper and Ferran Torres was the player up front for Manchester City, but both teams didn’t play anyone in the position. City are yet to buy a striker this summer window with Harry Kane’s move still doubtful. Spurs too struggled without Kane in their lineup which just shows how important a prolific goalscorer is for a top team.

Both sides made ample of scoring opportunities but just couldn’t make the most out of the chances they had. Mahrez, Sterling and Grealish were doing well in the final third but just couldn’t find anyone in the box to poach it in. Spurs too made great runs on the counter as they pushed the ball quick just to find no one in front of the goal to finish the job. Son and Kane together made up the highest amount of goals together in the league last season and Son just didn’t have a strike partner to pass the ball to. Both clubs need to sort the striker position before the window ends or they are in big trouble for the next 4 months.

Jack Grealish’s debut was more or less just what was expected out of the youngster. The player is known for his dribbling ability and winning fouls in dangerous positions and that is exactly what we saw tonight. He conceded a foul just before the penalty box and City could have easily scored from that position. Grealish had some good link-up moments with Sterling and we also saw a little bit of magic brewing between him and Kevin De Bruyne after he was subbed in at the end. Grealish is a great addition to their already star-studded side and it is safe to say that he has a massive impact on their game.

The one flaw we saw in Grealish’s game was that he struggles to find a man in the final third after carrying the ball through the defence. He was getting the possession too far upfield and if he was given the ball higher up the pitch, his work on the ball would have been far more fruitful. We did see this happen once De Bruyne came on and did the job of carrying the ball forward. This in turn enabled Grealish to go deeper in the box and get into scoring positions. Overall it was not the debut everyone hoped for but the debut that might be enough to set the tone for the rest of the season.