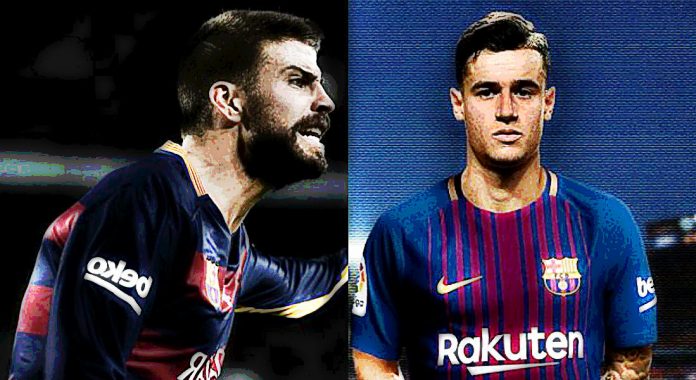 Barcelona defender Gerard Pique is reportedly angry because Philippe Coutinho is set to get a bigger contract than him, if the club bosses manage to tempt Liverpool to sell the Brazilian in January or next summer.

The Catalan giants were desperate to sign Coutinho over the summer but despite repeated attempts the La Liga giants failed to convince the Reds to sell their most prized asset.

Barcelona are reportedly eyeing to launch an initial offer of £127m to tempt Liverpool to sell Coutinho in January, despite Liverpool supposedly not willing to listen to offers in the New Year.

According to reports this week, Coutinho wants to hold showdown talks with Jurgen Klopp in a bid to push through his move to the Nou Camp.

Barca superstar Pique is not happy that the club bosses are willing to hand Coutinho a bigger contract than him, according to Diario Gol.

Pique is only behind Lionel Messi and Luis Suarez in the list of highest earning players at the Nou Camp.

And now it is being said that Pique will hand in a request for a contract extension, with his current deal with Barca set to run out in 2019. This could also instigate Sergio Busquets to ask for a higher wage packet on par with Suarez as a reward for his loyalty to the club.

The report says that Coutinho’s arrival on a bigger contract could spark a battle of egos within the Barcelona dressing room.