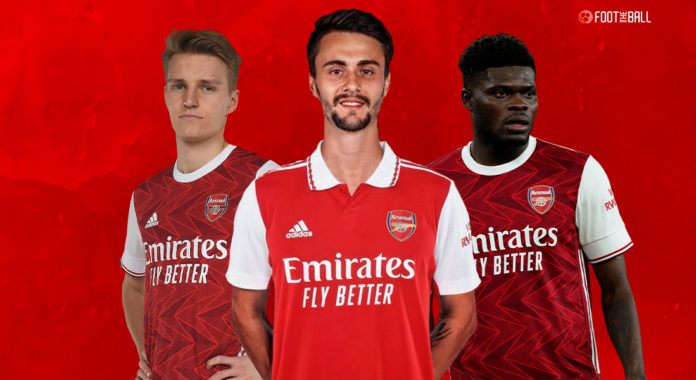 In the end, it was a difference of three points between Arsenal and the Champions League. The Gunners finished two points behind Tottenham Hotspur. Even if they had finished on level with Antonio Conte’s men, their inferior goal difference would have come in the way.

Now Mikel Arteta is planning for the next season and has made his intention clear by signing Porto’s Fabio Vieira. The 22-year-old was a creative force in the Portuguese champions’ midfield and, along with Vitinha or Vitor Ferreira, formed a formidable young duo for Sergio Conceicao’s team.

“Deal complete for amount of €40m, and of these, €5m are dependent on achievement of sports objectives”. pic.twitter.com/oaRLXGpeVX

The youngster will enhance the quality of the Gunners’ midfield and make sure they do not lose out to their rivals. With the amount of money Arsenal spent on him, they expect that he hit the ground running at the club as soon as possible.

But how will he fit at Arsenal? Will he improve the team by leaps and bounds? And does the transfer fee justify his talent?

We at FootTheBall grade Fabio Vieira’s transfer from Porto to Arsenal.

The Portuguese is a creative player who can conjure up assists out of nothing. He has an eye for making that defence-splitting pass and will ease the burden on Martin Odegaard. Furthermore, Arsenal also suffered from a lack of quality options on the bench. And even if Vieira cannot start games initially, he will still offer an alternative plan to Arteta.

The club has also announced the departure of Matteo Guendouzi, whose void will now be filled by the Porto man. Arsenal will also have to add a quality striker if they want to utilise the full potential of Fabio Vieira. He was the provider of the top assist for Porto last season, and if he does that same this season, Arsenal will be a serious top-four contender for the upcoming season.

If Tielemans signs on top of Fabio Vieira it spells the beginning of the end for Granit Xhaka at Arsenal Football Club; a great servant, but he's no longer required as his play style doesn't suit the 4-3-3 in the single pivot or the #8 role.

Arsenal also have the luxury of having a brilliant defensive midfielder like Thomas Partey. He can effectively shield that backline allowing Odegaard and Vieira to show their magic in the attacking third.

His stats have also shown that he tries to attempt hard passes and move the play forward. This will allow Arsenal to be more attacking with him on the pitch.

The player, though left-footed, is equally capable of playing with both feet, which helps him be a good player in tight spaces.

According to FotMob, he had an Expected Assists (xA) of 0.34 per 90 minutes, the best in the league. He was involved in 20 goals this season, but since he played fewer minutes as compared to his teammates, he was involved in a goal every 66 minutes, which is among the world’s best.

He also provided an assist each in the Champions League and the Europa League. Due to Porto’s riches in the attacking department, Fabio Vieira was not usually allowed to show his goal-scoring prowess. However, the UEFA Euro under-21 Championship qualifiers showed Vieira’s goal-scoring side. The midfielder scored seven goals and provided two assists in eight matches to become the second-highest scorer, indicating that Vieira can create goals and score them.

The Gunners spent €45 million on Fabio Vieira’s transfer. It included €40 million plus €5 million as add-ons. This is a massive amount for a player with only two seasons under his belt. And Arsenal do not spend this amount of money on a player often.

The club were also the first to use high-end data analytics before signing a player. So, if Vieira has managed to make the cut, then we can be assured that the club hierarchy are confident that he deserves the money.

We must also not forget that Vieira topped the assist chart on a team blessed with creative players such as Vitinha, Otavio, and Mehdi Taremi while playing almost half of the time less than them.

While the leap from the Primeira Liga to the Premier League is huge, players such as Luis Diaz, Bruno Fernandes, and Ruben Neves have shown that players can bridge the gap.

It is a substantial investment from Arsenal but considering the inflated fees in modern football, getting a player of Vieira’s quality for €40 million is an excellent business.

It is no secret that Arsenal have made their midfield one of the best after Fabio Vieira’s transfer. However, the Gunners also suffered from the lack of an elite striker who could finish the chances created by their midfield.

Mikel Arteta has always been on a lookout for a player of bernando silva playmaking style and in Fabio Vieira hes got one!
Welcome to the Emirates stadium Fabio❤️ pic.twitter.com/n5os0Ya9Ep

And even after Vieira’s signing, the team will need to have a striker who can take advantage of the chances created by Vieira and Odegaard. What made Arsenal lose the final Champions League spot was the fact that Tottenham had three great goalscorers in Harry Kane, Son-Heung Min and Dejan Kulusevski. Arsenal have creative players. They now just need the players who can give them the goals.

Vieira had the highest Open Play Assists per 90 (0.68) in the Primeira Liga last season, and only Lionel Messi played more Throughballs per 90 (0.81) in the Big 6 leagues #AFC pic.twitter.com/f6EgIvWH1E

In addition, Arteta has proved that, given time, he can get players better and accustomed to his system. Furthermore, with Manchester United going after Vieira’s midfield partner at Porto, Vitinha, the top four race will only get intense.

Tottenham Hotspurs have also stepped up their game and brought Ivan Perisic, Fraser Forster, and Josh Keeley and are already looking to get Yves Bissouma from Brighton. Whatever the final four may be in May next year, it will be an exciting Premier League season.