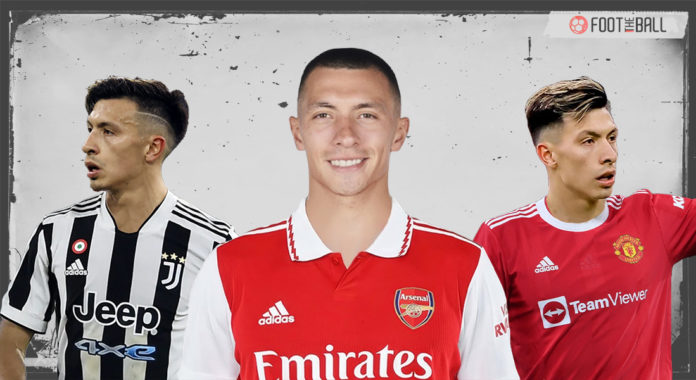 Ajax are the most in-demand club in football right now. The Dutch giants are battling on multiple fronts to not lose all of their best players at once. They have already parted ways with Andre Onana, Ryan Gravenberch, and Nasser Mazraoui.

However, more departures could be on the way. Lisandro Martinez, their highly coveted ball-playing centre-back has been the subject of furious speculation. There are quite a few European clubs looking for an elite central defender, and Martinez fits the bill.

Moreover, he is also a defensive beast and has his very best years ahead of him. Therefore, whichever club gets him will be setup nicely for quite some time.

The best facts you have to know about Ryan Gravenberch right now!

That is why Ajax are standing firm on negotiations against a myriad of clubs. So, which team would provide the best fit in Europe and why? FootTheBall lists the ideal landing spots for Lisandro Martinez if he does leave in summer of 2022.

A starting role at a big English club under new, ambitious owners with a Champions League-winning coach? The stuff of dreams for a 24-year-old moving to a top-five league. Chelsea need centre-backs, it is no big secret.

They have lost Antonio Rudiger and Andreas Christensen already. Moreover, they could yet see Cesar Azpilicueta depart as well. The idea of leaving the back-four in the hands of Trevoh Chalobah, Thiago Silva, and Malang Sarr is not appealing. Therefore, first-class defenders are a priority.

Chelsea have a few options, including Jules Kounde and Matthijs de Ligt. However, Martinez would be ideal for the role.

His youthful exuberance would offset the veteran Silva, while linking up terrifically with the midfield. Additionally, his agility will allow Thomas Tuchel to continue with a back three, that can cover the wide areas too.

Will the Red Devils be able to sign any of their intended transfer targets? It is a tricky question. United are hell bent on getting Frenkie de Jong and if possible, Antony too. Erik ten Hag is going all in against his former club.

How will Antony fit in at Manchester United? We tell you!

🚨 Manchester United are set to go head-to-head with Arsenal for the transfer of Lisandro Martínez.

Erik Ten Hag sees the defender as a top target.

However, Martinez would prove to be an astute acquisition in itself. He would immediately improve a defence that finished the 2021-22 season with a goal difference of…0. Harry Maguire’s struggles were laid bare, while Raphael Varane struggled to recapture his old form.

Victor Lindelof and Eric Bailly were not trusted much to start regularly. Therefore, a high-class centre back is needed, and Ten Hag knows Martinez well.

His passing range and eye for intercepting danger will come in extremely handy for a team that whose defence is expected to struggle in the coming season as well.

The Old Lady needs some fresh faces. Juventus have already brought back Paul Pogba on a free transfer (again), and could need defenders too. Matthijs de Ligt is on the radar of several clubs, while Giorgio Chiellini has left.

Leonardo Bonucci is 35-years-old. That leaves only Daniele Rugani who is young and staying. Therefore, adding Lisandro Martinez will be a very wise decision.

He would immediately offset the departures of Chiellini and De Ligt. Moreover, he will slot in alongside Bonucci to form one of the toughest defences to beat in Serie A.

Max Allegri is famed for his defensive tactics, and Martinez could be exactly his type of player. Manuel Locatelli and/or Paul Pogba could kickstart attacks alongside Martinez from the team’s own half.

Another young central defender? Say it ain’t so! However, that is exactly the case in 2022. Despite having Ben White, Gabriel, and the loan-returned William Saliba, Mikel Arteta is gunning for Martinez.

The Gunners are very interested in bringing the Argentinian to the Emirates, meaning he should be promised game time. That could be easier said than done, but the move does have its benefits.

Arsenal have submitted a new bid for Lisandro Martinez, as reported by @MikeVerweij. €40m with add-ons included, but Ajax always asked for €50m fee. Man Utd have also been in touch with his agent ⚪️🔴 #AFC

Again, Ajax have no intention to sell both Lisandro and Jurrien Timber. pic.twitter.com/yjiTEt5g1j

Martinez could very well become the top centre-back in the team, forming a tremendous backline. This could be exactly what Arsenal need in order to make top-four again.

They have already signed Gabriel Jesus, and are in talks regarding Raphinha as well. If one or two of those transfers work out, Arteta would be cock-a-hoop.

This move depends on whether Milan Skriniar leaves. In the event that he does, this could end up being one of the most shrewd signings. Martinez will instantly have one of the best young centre-backs alongside him in Alessandro Bastoni.

The pair could wreck havoc in defence and attack, given their advanced thinking with the ball. Simone Inzaghi has kept Inter supremely competitive, as they finished second in 2021-22.

Moreover, Inter have also brought back Romelu Lukaku, who will be a favourite target for the long balls. The 2021 Scudetto winners have the means to get a deal done, provided Skriniar gets sold first.