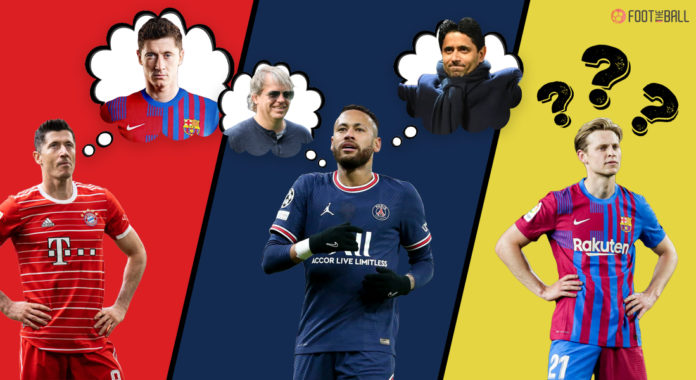 The 2022 summer transfer market is in full swing, with clubs going hell for leather. Or at least, trying to.

Several top players have already sealed their moves to new clubs, while many others are hoping for the same. Moreover, clubs are trying their best to persuade the best talents, while keeping in mind the delicate financial situation.

Among the biggest transfer sagas to have seen completion include Erling Haaland to Manchester City, Darwin Nunez to Liverpool, and Gabriel Jesus to Arsenal, to name a few.

However, there is no doubt that many more big transfers will be happening over the upcoming weeks. All of it can get confusing for fans to track, so here are the biggest transfer sagas to follow right now.

It has already been a trying start for Manchester United fans this summer. All of their rivals have strengthened considerably, while the Red Devils have only cleared space. Erik ten Hag is trying to raid Ajax, but that strategy is slowing down.

After €65m new verbal bid, Barça ask for €85/86m fee. The agreement is finally getting closer as clubs are in talks about add-ons to reach €85m full package.

Work in progress between clubs. pic.twitter.com/tXZiPKD9NN

Their main transfer target since the beginning has been Frenkie de Jong, now at Barcelona. However, the intense haggling over the price tag is not helping their cause.

Moreover, De Jong openly stated his intention of wanting to continue with the Catalans. He is also due deferred wages, which is further complicating a proposed transfer. United are still on it, but Barcelona have made their intentions to sell clear.

Ronaldo: To stay or To go?

A transfer saga that has had the potential to brew is now out in the open. Cristiano Ronaldo has asked for a move away from Manchester United if they receive a “satisfactory offer.”

There were longstanding questions surrounding his fit under Erik ten Hag, and the inability to compete for silverware did not help matters either.

Ronaldo does have a few suitors, who are keeping a low profile. Napoli are being touted as a surprise option, while PSG and Bayern Munich are more realistic possibilities.

Chelsea met with his agent, Jorge Mendes, but a transfer is unfeasible right now. Needless to say, this will be one of the most interesting sagas to keep an eye on. Ronaldo missing the preseason tour with United will not help in killing the whirlwind of rumours either.

A multi-million dollar offer from Saudi Arabia has also been rejected. PSG have refused to take him on. The offers are running out for Ronaldo.

Talking of PSG, there could be trouble brewing for their Brazilian superstar. President Nasser Al Khelaifi has stated strongly that some players will depart in 2022. The influence of sporting director Luis Campos is already being felt, with the appointment of Christophe Galtier and his right-hand man Joao Sacramento.

Imagine #Neymar in the #PremierLeague 🤩😍 pic.twitter.com/p8Pb0zVG38

One of the key players who could end up leaving is Neymar. Though his agent has stated that he would like to stay, PSG will not be averse to selling him for the right price. Chelsea and Barcelona are a few of the clubs interested in signing Neymar if a reasonable price tag can be found.

The dominating transfer struggle of recent days. Jules Kounde is being heavily chased by both Chelsea and Barcelona. The player is open to moving to either side, and it depends on how much each club can offer in transfer fee. Sevilla sporting director Monchi is an extremely canny operator, who knows the value of Kounde. Chelsea are also pushing for Presnel Kimpembe, having already signed Kalidou Koulibaly. Meanwhile, Barcelona have also added Andreas Christensen, and adding Kounde will be another big coup. Their economic levers are working in full flow, meaning there’s a lot of promise soon.