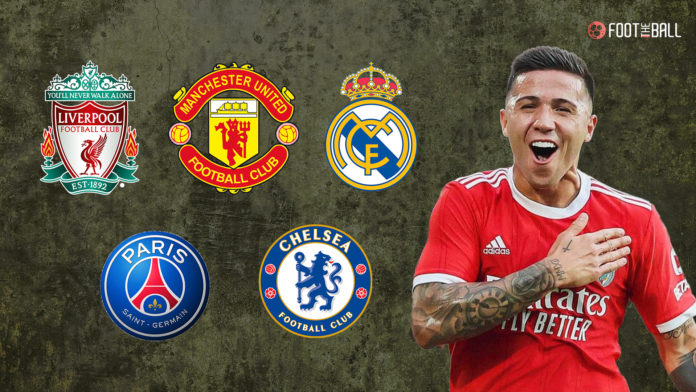 The 2022 FIFA World Cup witnessed the perfect ending as Argentina beat France in one of the best finals on penalties to win their third title. La Albiceleste’s title win was based on a combination of experience and young blood. While veterans such as Lionel Messi and Angel de Maria lived up to their name, they were ably supported by the new generation of players such as Julian Alvarez, Alexis Mac Allister, and Enzo Fernandez.

Among all these players, Enzo Fernandez is a player that has gone under the radar. Yet, the 21-year-old, who plays for SL Benfica in the Portuguese league, was the lynchpin in Argentina’s midfield. One of the best young midfielders in the world, Fernandez was already on several club’s radars in the summer transfer window.

However, with his impeccable showings in Qatar, which got Argentina a World Cup title, it is safe to say that his stock has massively risen. This means to[p clubs will further intensify their efforts to lure him.

Who are the top five potential clubs he could go to if he decides to leave SL Benfica?

Before the start of the current season, Jurgen Klopp was asked whether he would like to sign any top midfielders. Klopp had replied in the negative then. However, after Liverpool’s horror start, he might be tempted to check out a few options. And Enzo Fernandez could be the perfect addition to the Reds’ midfield. At 21 years of age, he will give Liverpool many years of top football.

In addition, he will also add much-needed dynamism and ensure Liverpool move the ball forward quickly. More often than not, they have lacked the steel in the middle of the park, which has exposed them and made it easy for the opposition to dominate them.

It is why Liverpool find themselves sixth on the Premier League table and are seven points adrift of the Champions League spots.

What a revival Manchester United have seen under new manager Erik Ten Hag. The Red Devils have returned strongly after a horrible start to the season. However, despite that, the lack of quality in the squad, when compared to other teams, is there for all to see. While Casemiro and Christian Eriksen have been brilliant in the midfield, both are of 30 years.

Manchester United clearly lack a talented young midfielder that can directly come into the playing XI and raise the squad’s standard. However, Enzo Fernandez could offer them exactly that. His acquisition would also provide Ten Hag with quality alternatives to Casemiro and Eriksen.

I cannot wait to watch an EVEN MORE confident Enzo Fernandez in Roger Schmidt’s Benfica team, once again.

One of the most enjoyable players and teams to watch in club football this year for sure. pic.twitter.com/Rq8t0cVmOw

Imagine a midfield trio of Aurelien Tchouameni, Eduardo Camavinga, and Enzo Fernandez. Real Madrid, in recent years, have abandoned their policy of signing Galacticos. Instead, they now sign young talented players and convert them into world-class stars. Vinicius Jr is a perfect example of that.

And under this new policy, Enzo Fernandez is a perfect fit. He is on;y 21 and has ample time to refine his game. In addition, he will also cost less compared to other alternatives, such as Borussia Dortmund’s Jude Bellingham.

In addition, as demonstrated in the World Cup final, he is also an excellent presser of the ball, which will come in handy for a team like Real Madrid that deploy a ruthless counter-attacking style.

Enzo Fernandez is 21 years old and just came to Europe this Summer, for only 12M from River Plate to Benfica. In just 6 months he played a fantastic first half of the season in Benfica's unbeaten team, won the worldcup and that as the best Young Player of the tournament.

Paris Saint Germain currently have the best-attacking players in Neymar, Kylian Mbappe, and Lionel Messi However, in the midfield, the French club now seem to invest in young talent. The summer acquisition of Vitinha from Porto was a clear example of that. With the attacking trio taking a considerable chunk out in salaries, players such as Enzo Fernandez will ensure the club keep a check on their FFP spending and, at the same time, don’t drop their squad’s quality.

With Marco Verratti not getting any younger, Fernandez could be the next lynchpin for the team. In fact, when asked who his favourite player at the position was, Fernandez picked the Italian.

Chelsea have had a difficult last few months after losing their owner and Champions League manager, Thomas Tuchel. And despite spending the most in the transfer window, they find themselves eighth in the league. This has prompted Chelsea to sign more players. Christopher Nkunku has been signed but will only join in the summer. Chelsea need an immediate fix, and Enzo Fernandez is precisely that.

He will provide the box-to-box presence that Chelsea have been sorely lacking. And with Jorginho and N’Golo Kante not getting any younger, a player like Fernandez is what Chelsea need.