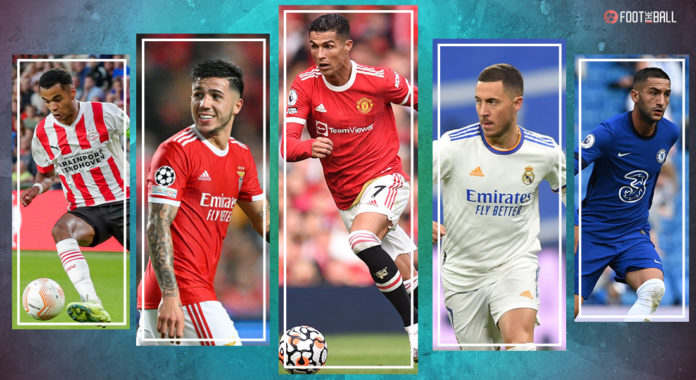 The winter transfer window is less than a week from opening, with several players expected to change clubs over the month. While there are few top transfers in this period, this window will be different. This is because it comes just after the 2022 FIFA World Cup, where several players put in commendable performances to make their case for a transfer to a bigger club.

However, some players were in demand even before the World Cup and have further raised their profile in Qatar. In addition, other players who didn’t participate in the World Cup will still be in demand.

So, here are the top 10 players who could change clubs in the winter transfer window.

Well, one transfer is happening for sure, and that is Cristiano Ronaldo. After his interview with Piers Morgan, where he hurled several accusations at Manchester United, manager Erik Ten Hag, and owners Glazers, his contract was terminated by the club.

So, currently, Ronaldo is without a club, and after being rejected by multiple European clubs, his most likely destination appears to be Saudi club Al Nassr. The team have offered him a massive seven-year deal worth € 175 million. Under this deal, he will play 2.5 years for the club before becoming the brand ambassador for Saudi Arabia’s 2030 FIFA World Cup bid.

If one person has stepped into the limelight at the 2022 FIFA World Cup, it is Cody Gakpo. The PSV forward scored three goals, the most by any player on the team. In fact, he was the only attacking star in an otherwise defensive-heavy Netherlands squad.

However, Gakpo was in incredible form even before the World Cup. He is both the top scorer and assist maker in the league. Gakpo has found the back of the net nine times and has 12 assists to his name. This has made him, by far, the best attacker in the league, and while he has a contract that runs till 2026, that will not deter any team from swooping in for the talented player.

After a month-long incredible World Cup, many people would have forgotten the Ukrainian sensation Mykhailo Mudryk. However, the top European clubs still remember the talented winger. Mudryk has been in top form scoring seven goals and providing six assists in the league.

With stats like these, he is bound to be on every club’s radar.

Enzo Fernandez was the midfield controller in Argentina’s impressive 2022 FIFA World Cup winning campaign. The Benfica man is a player who has massively raised their stocks due to their incredible exploits in Qatar.

With one goal and three assists to his name, Fernadez has been the perfect number six, and his presence is one reason Benfica is eight points ahead of second-placed Porto. However, with such brilliant performances come big clubs. And multiple clubs will be looking to add Enzo Fernandez to their squad, with the January transfer window being the most opportune moment.

Milan Skriniar has been the rock in the Inter Milan defence for more than five years. However, his contract is set to expire in the summer of 2023. While several clubs could sign him earlier and wait for him to join for free in the summer. But with the quality of the defender at the age of 27, the club would be okay with paying a small fee to secure his services in January itself.

Skriniar will not only improve the defence in the squad but also bring in the experience of winning silverware he has done in Milan. With several clubs leaking goals in abundance this season, expect the Slovenian to make a big move, whether in January or the summer.

Memphis Depay has been a man who has been unable to resurrect his career at Barcelona. Although, to be fair to him, he joined the club in 2021 when the club was in dire situations on and off the field. And with only 13 goals to his name, his stint at Barcelona is all but over.

Depay is expected to leave in January, and with his talent, there will be no shortage of clubs ready to swoop for him. A return to Eredivisie and Ligue 1 could be likely on the cards, given that he massively performed in these leagues.

Memphis Depay future will be decided in January, there's still nothing concrete or advanced – he's focused on Barça. There is no transfer talk initiative from Newcastle United yet.#FCBarcelona pic.twitter.com/Y7pvdHAR5T

What a massive fall it has been for Eden Hazard. When he left Chelsea for Real Madrid in 2019, Hazard was one of the best players in the world. However, three years later, he mostly warms up the bench at best. After playing 51 matches, he has scored a measly four goals.

His presence has not affected the team, as they have continued to win trophies. However, with Hazard earning more than € 4,50,000 per week, Los Blancos will be looking to cut their losses. Several clubs would still want the Belgian, but only if he takes a heft pay cut.

One of the best players to play for Barcelona in the last decade, Jordi Alba has been a constant presence on the left side of Barcelona’s defence. However, age has caught up with him, and he has yet to be able to perform at the highest level. As a result, he has also been replaced in the Barcelona line-up by Alejandro Balde.

And rumours have said Alba will likely leave La Blaugrana in January. According to several reports, he is likely to join Gerard Pique’s club FC Andorra whose club President, Ferran Vilaseca, was interviewed by FootTheBall.

Hakim Ziyech was one of the best players during Morocco’s dream run during the 2022 FIFA World Cup. However, the same can’t be said for his club career at Chelsea. As a result, Ziyech has fallen down the pecking order at Stamford Bridge and needs more minutes at the club.

However, His stock has massively risen after the World Cup, and there will be plenty of clubs looking to sign the winger. His contract runs till 2025, which means Chelsea can sell him for a hefty fee. Serie A champions AC Milan are rumoured to be leading the race for the Moroccan.

Hakim Ziyech seemed to be on his way to Ac Milan all season, however they don't feel financially ready to pay him his asking price. Newcastle FC have recently joined the race and could steal him from Ac Milan.

Chelsea FC have allegedly been making a transfer hard to work out. pic.twitter.com/JGMcTqkD2P

When France were 2-0 down in the 2022 FIFA World Cup win, manager Didier Deschamps substituted his two trusted players, Olivier Giroud and Ousmane Dembele, off. In their place came Randal Kolo Muani and Marcus Thuram, who were unfazed by the occasion and helped France come back in the match.

Thuram especially used his pace to exploit the space on the wings and provided a superb assist for Kylian Mbappe’s assist. Thuram’s stock was already rising before the World Cup, and the tournament in Qatar has further strengthened his credentials which will help him if he decides to part ways with Borussia Mönchengladbach in January.