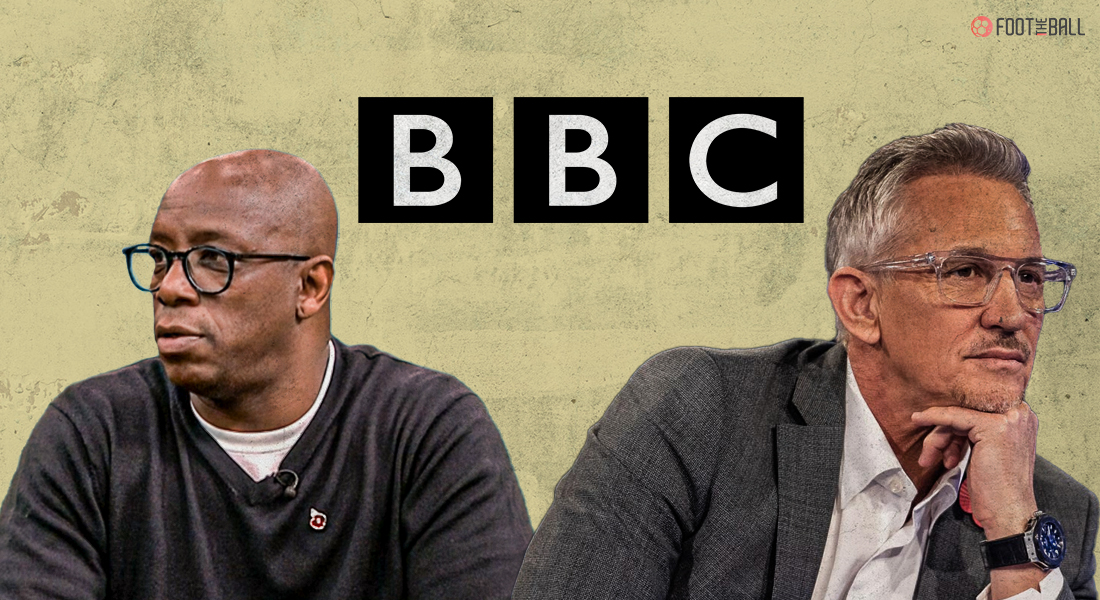 There are some occasions when the nakedness of modern football is laid bare. The capitalist monster must be fed content at all times and sometimes the costs are often overlooked. One such showcase was yesterday’s match between Denmark and Finland. The BBC received a lot of flak on social media for their coverage of last night’s Euro 2020 game at the Parken Stadium in Copenhagen.

Viewers accused them of insensitivity as the channel continued to broadcast as Denmark’s Christian Eriksen received life-saving treatment by the medical staff on the field. The telecaster even zoomed in on his devastated wife as captain Simon Kjaer and goalkeeper Kasper Schmeichel consoled her.

Praying for Eriksen and his family. Please, please pull through 🤞 🙏#EURO2020 #DEN

BBC pinned the responsibility on UEFA which provides the global feed and claimed that they, as broadcasters have no control over the shots displayed. The man behind the decision-making TV director Jean-Jacques Amsellem later explained his decision to broadcast the emotions surrounding the incident while speaking to L’equipe.

WHAT CAUSED THE CONTROVERSY?

The 29-year old midfielder collapsed on the pitch during the first half of the match. A prolonged Cardiopulmonary Resuscitation (CPR)  was administered to the unconscious Eriksen before finally taking him off the field on a covered stretcher. 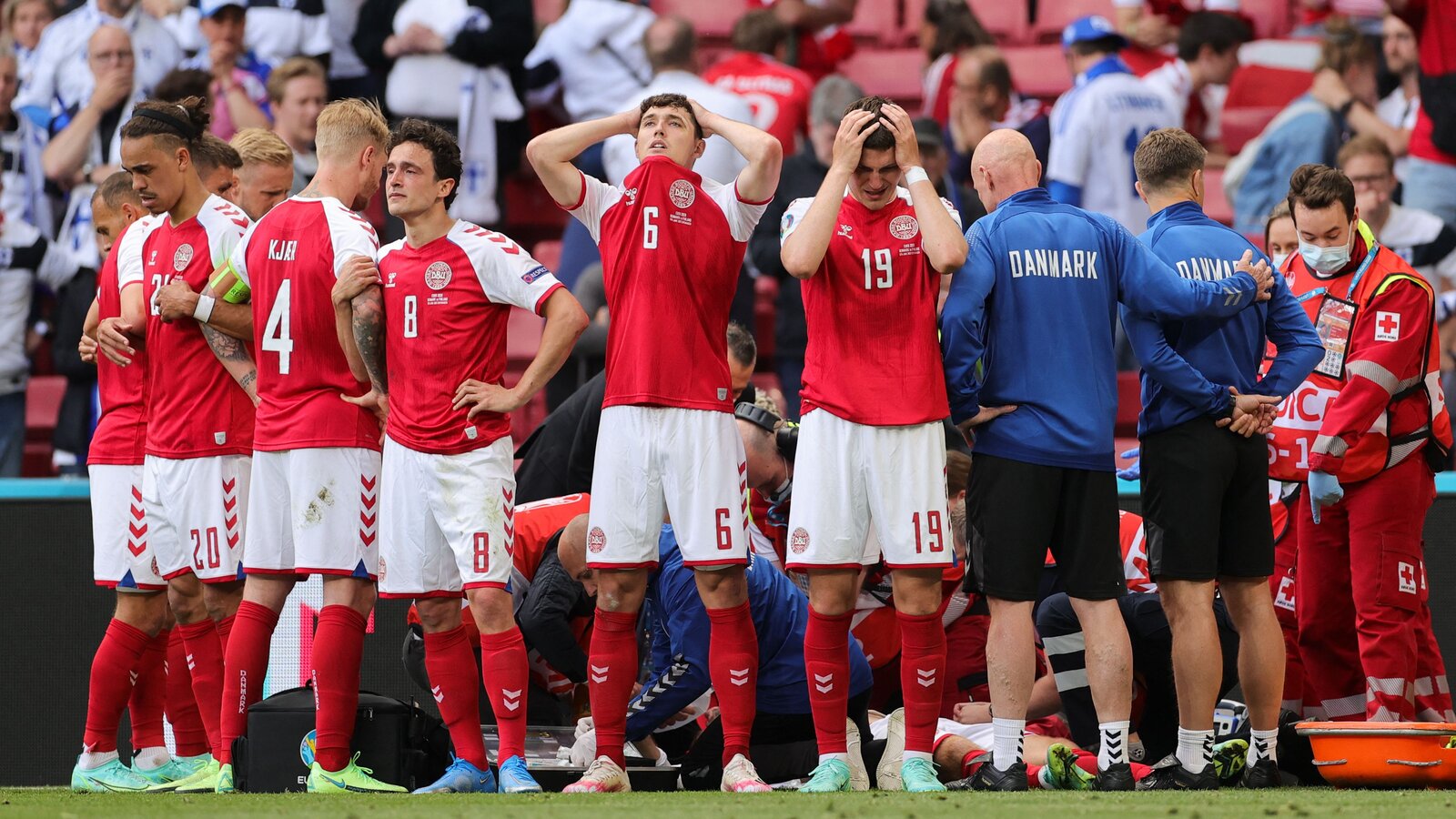 Users have been sharing images of Eriksen’s Danish teammates forming a wall around the player as he received the treatment to criticise the thoughtlessness of the broadcasting company.

One of the vocal critics of the channel’s actions was Ian Wright, a regular on BBC’s Match of the Day during the Premier League season, but on punditry duty for ITV during Euro 2020 who expressed his anguish and tweeted: “CUT TO THE STUDIO FFS!!!!”

The BBC has now apologised after the sea of complaints from fans and former players. A spokesperson gave out a statement: “We apologise to anyone who was upset by the images broadcast.

”In-stadium coverage is controlled by UEFA as the host broadcaster, and as soon as the match was suspended, we took our coverage off-air as quickly as possible.”

Gary Lineker added to the BBC’s statement by saying: “Everyone at the BBC is hoping that Christian makes a full recovery of course and we apologise to anyone who was upset by the images broadcast.

We will be back on air at 7.25 on @bbcone. I understand some of you would have been upset with some of the images shown (we were too). Obviously these were the host pictures and out of our control. They should have stayed on a wide of the stadium. Apologies.

Fans rejected their apology on social media and said it was a fallacious justification. Fans pointed the fact that the channel could have decided to cut to the studio as soon as the seriousness of the incident became clear.

Jean-Jacques Amsellem, the television director responsible for the global telecast of Saturday’s Denmark vs Finland fixture at Euro 2020, explained his decision on the broadcast during and after Christian Eriksen’s collapse.

In an interview with L’equipe, the French director said that contrary to public opinion, he kept the focus off the Danish player and only telecasted the surrounding atmosphere as a responsible professional.

“As you can imagine there is no handbook for these sorts of things. There was a slow-motion of the scene where we can see him fall really clearly, but I immediately forced my teams not to focus on him, not to film him anymore! With more than 30 cameras in the stadium, we could have continued to do so, but at no point did we go and do close shots on him. During all that followed, I actually went at one point to the Danes in tears because it was still necessary to show the distress. We also see the emotion of the Finns, that of the fans, but I do not think that we did anything murky.”

When asked about any directives received from UEFA, Amsellem said that the only directive was to not do close up shots of the collapsed player receiving treatment.

“Yes our producer was in conversations with UEFA. The instructions were clear: we were told not to do close-ups, not to film the cardiac massage, but that there was no problem with filming the surrounding emotion.”

He further said that it was his responsibility to transmit the emotion in the stadium to the audience watching the game on their television screen.

If we do a general wide shot, we don’t show the emotion. That could have been for a long time… but we also have to transmit how it felt in the stadium. We showed the sadness and distress of the people, on the side of the players, the staff and the fans. We also saw unity in this moment of great anxiety, it had to be transmitted. I wouldn’t call it voyeurism. If someone had told me ‘‘stick with the wide shot,” I would have. But the most important thing, frankly, is that he is ok.

WHAT HAPPENED TO ERIKSEN?

The shocking incident happened during the final moments of the first half in Copenhagen. Eriksen looked puzzled as his teammate passed the ball towards him from a throw-in and collapsed on the field as the ball rebounded off the player. Denmark’s Captain Simon Kjaer was the first to respond to the Inter Milan player and according to reports, made sure that he didn’t swallow his tongue, which could have resulted in choking.

English referee Anthony Taylor immediately stopped the game and signalled the medical staff to come onto the pitch understanding the severity of the incident.

Of all the split-second decisions Anthony Taylor has made in his life as a referee, tonight’s reaction was the most vital. Respect to Taylor for quickly realising the enormity of the situation in Copenhagen and getting medics on to assist Christian Eriksen. Medics also superb 🙌

Danish fans in the Parken Stadium looked on as their distraught team stood in a circle around the player. Both teams walked off the pitch and UEFA announced that the Group B game was suspended due to a “medical emergency”.

MATCH RESTARTED FROM WHERE THEY LEFT

The match was restarted about an hour later as UEFA announced that both teams have agreed to play following the news of Eriksen being stable and shifted to a hospital getting his treatment.

The match has been suspended due to a medical emergency which involved Denmark’s Christian Eriksen. The player in now in hospital and in a stable condition.

UEFA wishes Christian Eriksen a full and speedy recovery and wishes to thank both teams for their exemplary attitude.

Finland won the game 1-0 after the game restarted with a 59′ goal from Joel Pohjanpalo and consoled their nordic neighbours for what happened earlier.

Later, in the match between Russia and Belgium at St. Petersburg, Eriksen’s Inter Milan teammate and Belgium’s ferocious striker Romelu Lukaku dedicated his goal to the former Tottenham star.

The duo won this year’s Serie A title with Inter Milan, the club’s first scudetto in 11 years. In the post-match conference, an emotional Lukaku revealed that he was crying before their match when the Red Devil star got the tragic news.

"I cried a lot because I was scared."

Eriksen has been recovering and things look stable as of now. FootTheBall wishes good health to the Denmark midfielder and hopes to see him back on the field as soon as possible.