It’s been an exciting tournament, in terms of the knockout stage qualification at least, as only some of the matches have been thrilling enough for the viewers. The fact that only three teams confirmed their qualification into the Round of 16 at the end of the second matchday is enough for the third and final matchday to have an increase in its viewership as the remaining 13 spots get decided.

Just like the previous edition in 2016, Euro 2020 has given the third-placed teams in the groups a chance to qualify with four of the six third-placed sides qualifying for the next round. The top four teams that go through are the ones that have the highest tally of points and if points are equal, goal difference, out of the lot.

However, in Group D, none of the teams have confirmed their qualification into the next round and with the third matchday on the horizon, we, at FootTheBall, look at what the four teams in Group D need in order to qualify for the Round of 16.

Even the Czechs would not have expected that they would lead Group D going into the final matchday, but such has been their performances in the first two games against Scotland and Croatia. In the match against Scotland, they were the second-best side but individual performances from Patrick Schick and Tomas Vaclik helped them to a 2-0 victory.

Against Croatia, they were better compared to the first game but were not able to beat them and confirm a qualification spot. But the Czechs need only a draw in the game against England to finish on top of the group as their goal difference (+2) is better than that of the Three Lions (+1). A loss, however, will place leave them hanging as a Croatia win by over three goals can place them in 3rd place.

Similar to Czech Republic, England have secured four points from their two against Croatia and Scotland, albeit having two uninspiring performances in a row. Although they were the better side against Croatia, the finishing from their attackers was woeful at the very least.

Against Scotland, it was even more dire as they were able to muster only one shot on target despite the plethora of attacking talent at Gareth Southgate’s disposal. The manager’s tactics were criticised after the match, and they can be only rectified if they win the game against Czech Republic on Tuesday. 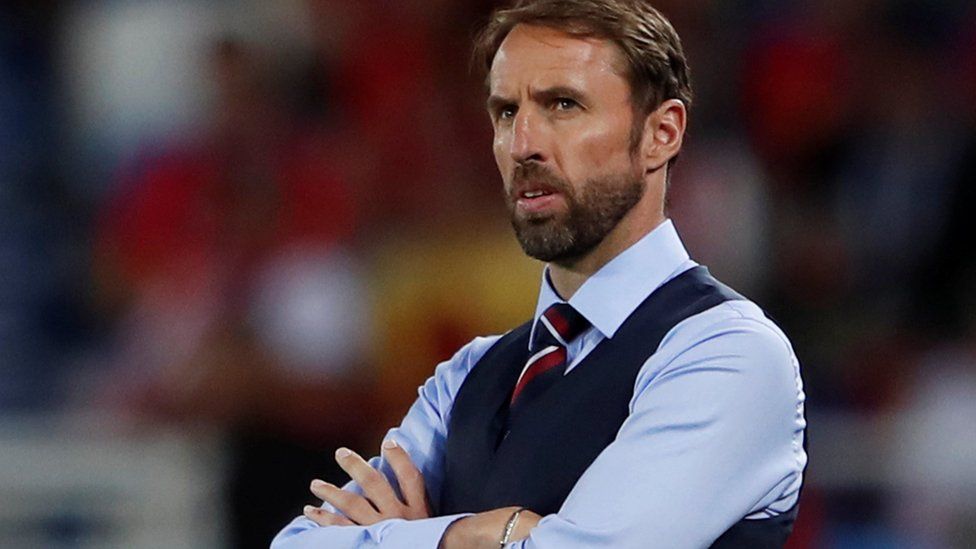 Southgate needs to be proactive if England want to finish at the top of Group D. (Image Courtesy: BBC/ Website)

The Three Lions have to win against the Czech if they want to finish top of the group but the fact that they face the runner-up of Group F, who could either France, Portugal, or Germany might make them settle for a point. Even if they lose, they are assured of a third-place finish, which may be enough for them to qualify for the next round.

The finalists of the 2018 FIFA World Cup, Croatia, peculiarly, have not been able to start their campaign with a bang as they were very timid in the approach against England in the first game, which ended up 1-0 in England’s favour. They were better in the game against Czech Republic but had to come from behind to secure a 1-1 draw on Thursday.

For their qualification, Croatia will need to win to at least secure a third-placed finish and have a chance to leapfrog into the 2nd, which depends on how many goals Croatia scores over Scotland and if there will be a loser in the other group game. A draw is not enough as that takes them to only two points and eliminates them out of the competition as there are already four third-placed teams with three points or more.

Scotland have the same situation as Croatia. They will need to win on Tuesday to secure third place in the group and have a chance to finish second depending on the other result as a draw would see them out of the tournament.

Contrary to the beliefs that originated prior to the start of the tournament, Scotland have held a good account of themselves in the games against the Czechs and rivals England. Although they lost 2-0 in the first game, they were better than the Czechs in terms of the overall performance but were denied the opportunity of winning the game, courtesy of a masterclass from opposition goalkeeper Tomas Vaclik.

And against England, they were the team who had the better chances but will be happy about the point secured against their rivals. However, they will need to work their socks off against Croatia and win to have a chance of qualifying into the next round, or else it will be over at Glasgow for the Scots.