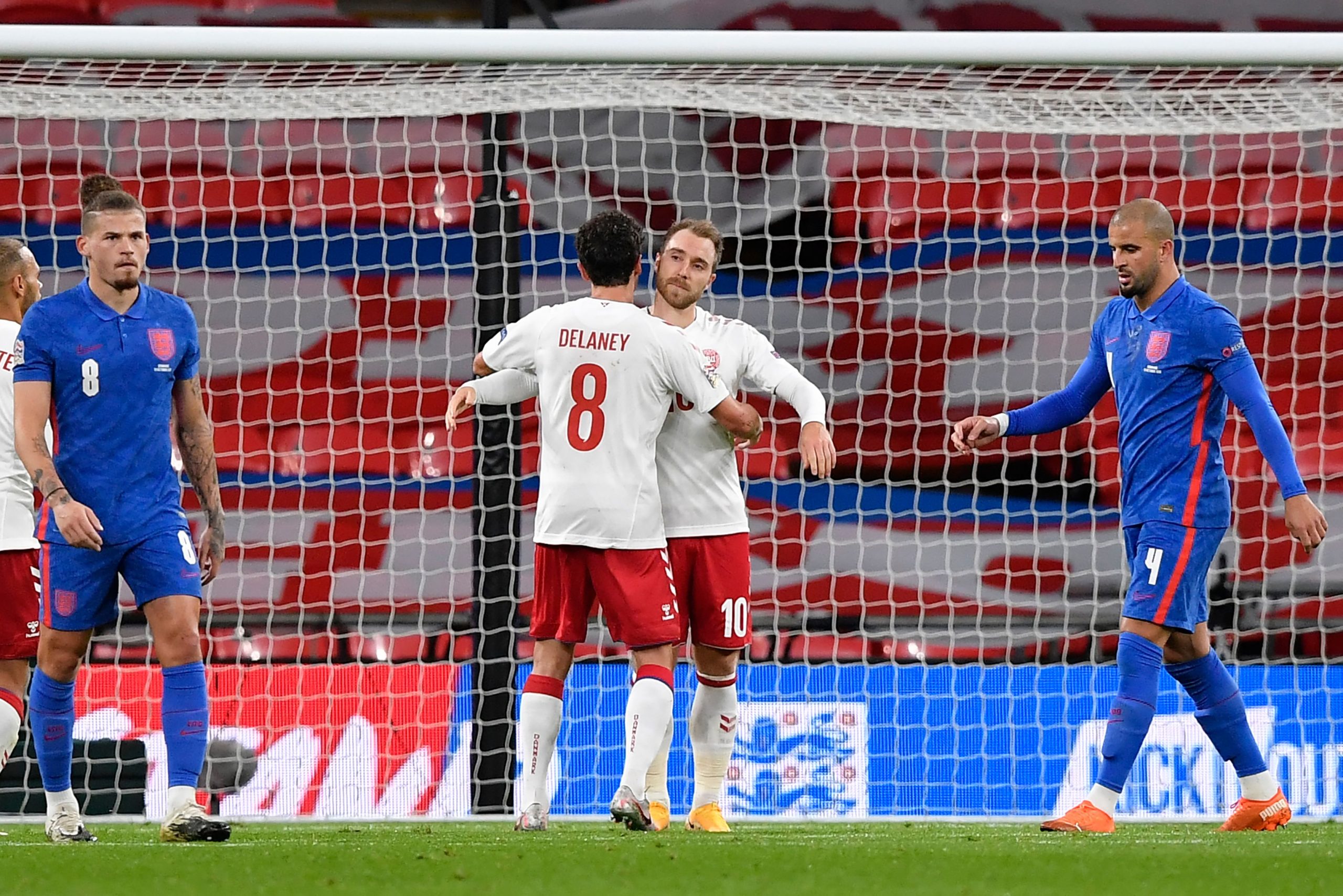 Meanwhile, FootTheBall brings you the action from the top games of matchday four of the UEFA Nations League 2020/21. 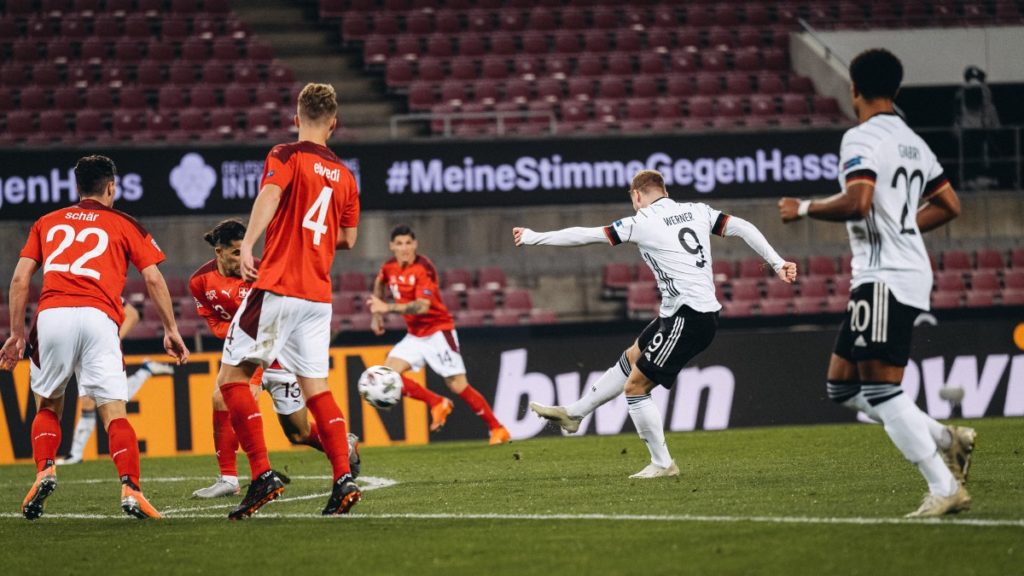 Timo Werner got his name on the scoresheet against Switzerland (Image Courtesy: Twitter/ @DFB_Team)

After a narrow one-goal victory against Ukraine on Sunday, Germany struggled quite a bit to control the Swiss national team initially. In a six-goal thriller that ended in a stalemate, Germany saw their youth make a difference and secure them a point from the game despite being behind until the hour mark.

This was followed by Timo Werner’s stunning goal that he managed to slide into the far post. Soon, Kai Havertz, with a brilliant interception, got Die Mannschaft level. Following this, within five minutes, Germany had their third from a beautiful backheel by Gnabry who equalised after Gavranovic’s second goal.

The game was end-to-end across the 90 minutes and Switzerland were making the best of Germany’s high defensive line. Germany, too, were creating plenty of chances. 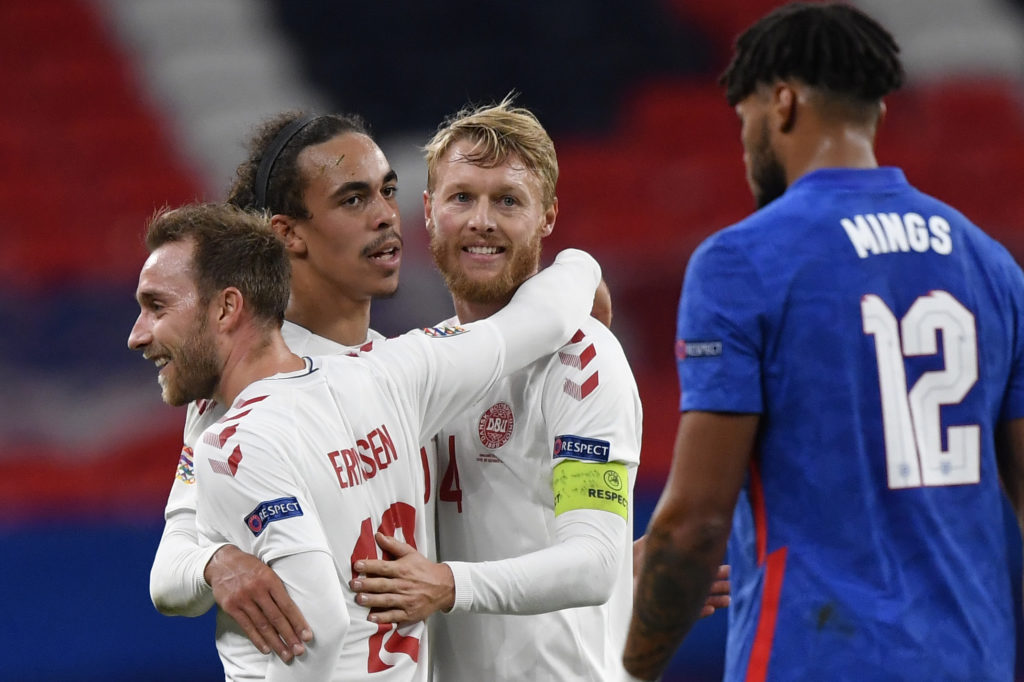 In a thrilling draw against Denmark that ended in a loss for England, the side fell straight from top to the third position in Group 1.

England lined up in a 3-4-2-1 with Mason Mount selected ahead of Jack Grealish once again. Denmark used a 4-2-3-1 formation with Simon Kjær captaining the side.

The game had been a tough one for the Three Lions, considering that Harry Maguire was sent off after receiving his second yellow card in the 32nd minute. This soon was followed by Kyle Walker committing a foul on Thomas Delaney and awarding Denmark a penalty. Christian Eriksen converted from the spot in the aftermath.

Eriksen’s spot-kick was the only goal of the entire match. Kasper Schmeichel otherwise had done a great job in keeping Mason Mount off the score-sheet having made some great saves throughout the game.

England, who were already appearing out of place and unable to cope up were further given another blow as Reece James was sent off for arguing with the officials after stoppage time.

The game once again highlighted the English team’s defensive woes. Gareth Southgate needs to develop a stronger and more mature side to be able to control the game better. 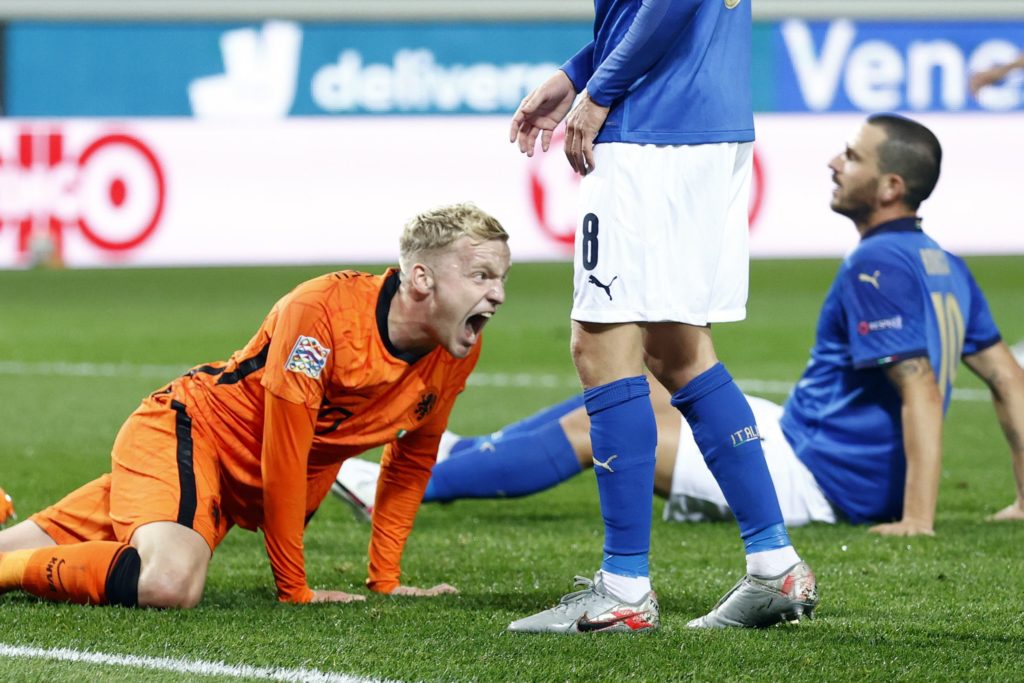 The Flying Dutchmen are in no mood to give up on their hopes for qualification (Image Courtesy: Twitter/ @EURO2020)

The home team lined up in a 4-3-3 structure with Federico Chiesa, Ciro Immobile, and Lorenzo Pellegrini being the three attackers.

Lorenzo Pellegrini opened the scoring for Italy in the 16th minute with a goal that he scored from Nicolò Barella’s cross.

Man Utd's Donny van de Beek scored for the Netherlands as they drew with Italy in the #NationsLeague.

This lead for Italy however was short-lived as Donny van de Beek soon scored his first-ever goal for the national team. The goal arrived in the 25th-minute on a counter-attack following a corner-kick by Italy.

The game was quite level and both sides were fighting hard to keep possession. The Dutch created plenty of chances but failed to convert them to goals, despite coming close in the second half. 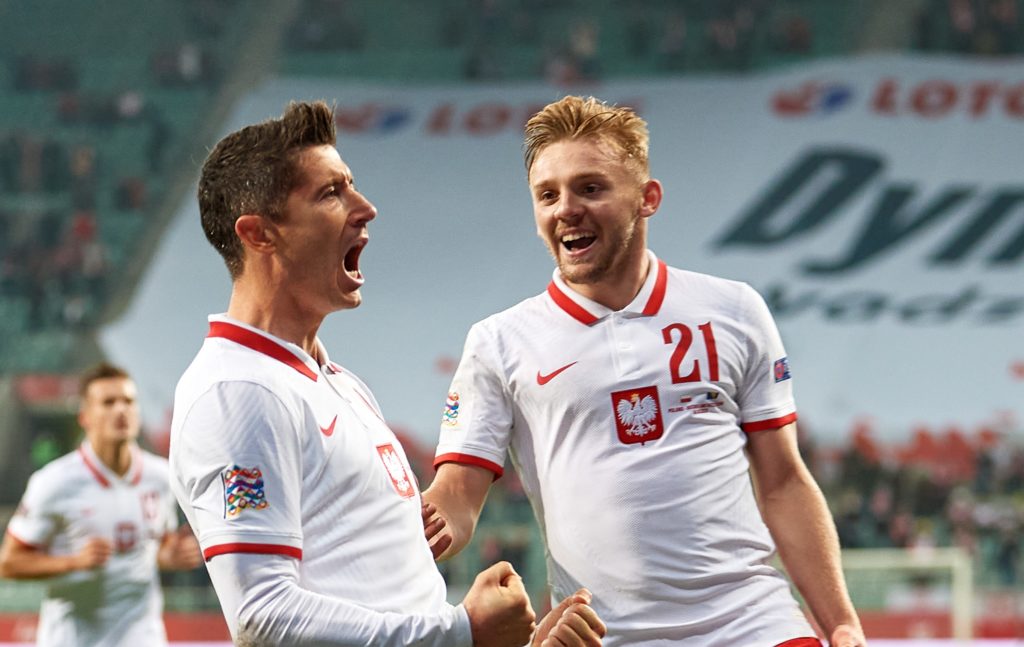 The Polish team lined up in a 4-2-3-1 with captain Robert Lewandowski leading the attack. Bosnia and Herzegovina, on the contrary, were more focused on defending and played a more conservative 4-3-3 with Edin Dzeko leading the side.

Bosnia and Herzegovina are placed at the bottom of their group with no wins in four games. The match became further tough for them after their defender, Anel Ahmedhodzic was sent off with a red card for tripping Robert Lewandowski.

The Polish striker appeared on the scene once again as he scored in the 40th minute of the game to put Poland ahead.

This was followed by Karol Linetty’s strike to double their lead at half-time.

As the game advanced, they continued to dominate and ten-man Bosnia were helpless. Lewandowski made the best of this situation and scored his second goal soon after half-time.

The result took Poland on top of their group with seven points from four games, one ahead of Italy and two ahead of Netherlands.

Other Results from Matchday Four