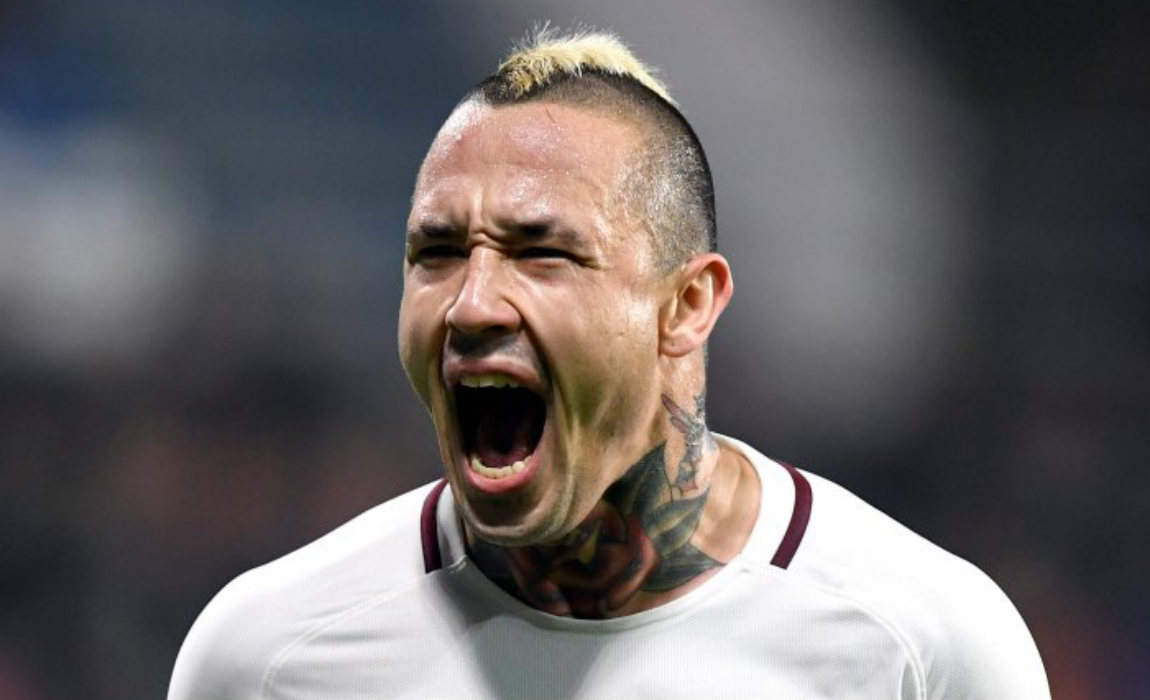 Nainggolan: “I Deserved The World Cup”

Roma superstar Radja Nainggolan spoke his heart out in an interview with Belgian media outlet HLN after Belgium head coach Roberto Martinez axed him from the provisional squad for the FIFA World Cup 2018, in Russia this summer.

The 30-year-old midfielder announced his retirement from international football after being left out of the World Cup squad and these are his words from the interview with HLN.

Has your career with Belgium come to an end?
Yes, I’ve had enough. My goodbye to the Red Devils has been signed. I will not continue to fight. I had already planned to quit if they didn’t let me go to the World Cup. It’s true that I considered making myself unavailable for Belgium over the last year but I still hoped I could participate in the World Cup. It was my childhood dream and I deserved it, but now it’s been taken away from me.

Did the contract extension of Martinez play a role?
No, because this happened after I made my choice.

Did you talk to anyone? Your agent? Your wife?
No, not even my agent knew I would be saying goodbye to Belgium. I only wrote what I thought…very briefly and without thinking for hours. It came straight from the heart.

You wrote: “Being oneself can bother some people.”
I don’t like to wear a mask, I am who I am. If some people don’t like that, then there’s nothing I can do. I won’t change for them. I’m tired of always being painted as a bad boy. Football is still a hobby for me. It’s become my job, OK, but I want to be judged on my performances on the pitch, not what I’m doing off the pitch. Would we talk differently about Maradona for that reason? Everyone is free to do what he wants if he plays well on the pitch. Do you think all the players are good guys? I’m not ashamed.

Belgium is in revolt now.
It’s difficult to comprehend, I’ve entered the Guinness Book of Records.

For what?
I’ve become the only player who has not been allowed to go to the World Cup twice in a row, it’s such an incomprehensible thing that I can already laugh about it.

How was your conversation with Martinez?
He called me around noon to find out where I was, in Belgium or in Rome. When I told him I was in Rome he told me he’d be here about 6.30. He told me to meet him at the Hilton hotel at the airport. My first thought was that he wanted to talk to me face-to-face, to make sure I was behaving myself. I called my national teammates to see what they thought, if he was here to make some rules or say that I wasn’t going to the World Cup.

And the second thing happened.
I’m sad, I deserved to be there. I got to the Champions League semi-finals and I played well with Roma, I can’t do more than that. Four years ago I was not allowed to go to the World Cup, but the decision was not based on my performances, I was still playing at Cagliari. The circumstances were different, but since then I’ve spent four years with Roma — I’ve played well but I wasn’t rewarded.

Martinez gave you an explanation.
First of all, I would like to say that the fact the manager came to Rome on Sunday I thought was great. I’d have done the same for him, if I have a problem with someone I go to him. He started by saying I was a top player with an important role at Roma, that if he was a club Coach he’d build a team around me but he couldn’t do it for the national team, there wasn’t enough time. He said I’m too important of a player to participate in the World Cup as twentieth man in the team. There are young players who would be happy to enter even for a minute, you wouldn’t be. I partly understand his explanation when he talks about a tactical choice. But then I think: what if two midfielders get injured? He’ll bring on one of the youngsters? He thought I’d behave poorly on the bench, but I’ve never caused issues on the bench before.

Did you try to convince Martinez?
I reassured him I would be ready if he needed me. If necessary, even as a 22nd, in any role. I told him, “Just tell me what you expect from me, you’re the one who ultimately makes the decision.” The conversation lasted about 20 minutes. He told me he hadn’t yet made a decision, even though that wasn’t the case. From his explanations, I was 70% sure I wouldn’t be going.

Did you talk to Martinez after your conversation in Rome?
He tried to call me before he announced his choices to the Press, but I was on a plane. He sent me a message saying “Call me”, but when I landed it was already clear that I wasn’t in the 28. Calling him back wouldn’t have made much sense.