Brazil are set to face Colombia in a top-of-the-table clash in Group A of the 2021 Copa America, in what looks like a mouth-watering clash on Wednesday at the Olympic Stadium in Rio de Janeiro.

The Selecao come into this game after two emphatic wins in their first two group stage matches, the first one a 3-0 win over Venezuela and the second one was a 4-0 rout of Peru. They were at their very best against Peru in both attack and defence, as Peru were able to muster only two shots on target in the entire game.

In the last eight games that Brazil played, they have gone on to win all of them, keeping clean sheets in seven of those matches. They will hope to continue the same on Wednesday.

Although their tournament started off on a good note with a win over Ecuador, cracks have been starting to appear in the Colombian side which is without their talisman James Rodriguez. La Tricolor held on to a draw after being down to 10 men in the game against Venezuela and on Sunday, they were defeated by Peru 2-1 at the Estádio Olímpico Pedro Ludovico.

A win against Colombia will confirm the first position in the group for Brazil and with a gap of six after their win against Peru, Tite’s men will be raring to play against a Colombian squad that will have only three days to rest after their defeat against Peru.

It is all good news in the Brazilian as there are no new injury issues and with the squad having a break of six days after their match against Peru, Tite will most probably name a strong side against Colombia as a win would confirm the top spot in Group B. A full squad of 24 players is at Tite’s disposal which has a plethora of talent within it. 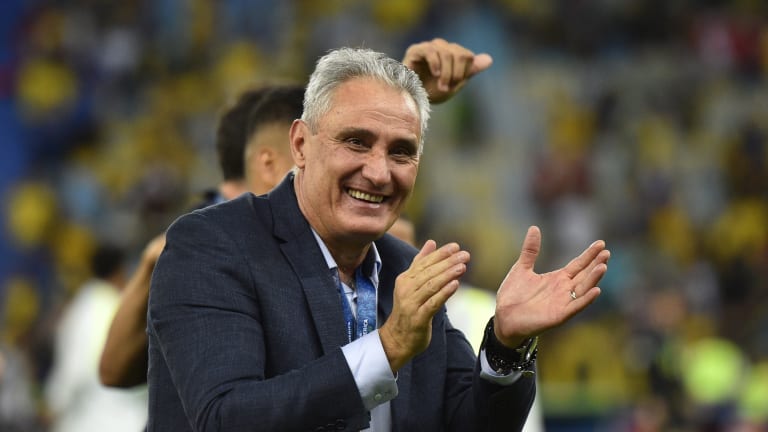 Reinaldo Rueda and Colombia will be happy that Luis Dias and Mateus Uribe return to the squad after serving their suspensions and are without Yairo Moreno who withdrew from the tournament after suffering a muscle injury during Colombia’s first game of the tournament. As seen in the previous two group stage games, most of the Brazilian attacks have to go through Neymar, and that it is not a surprise at all. The Paris Saint-Germain forward is one of the best players in the world and can break open defence at will with his silky footwork and goalscoring abilities.

For Colombia, most of the chance creation depends upon Juan Cuadrado. The Juventus man, who plays as a right-back for the Turin club, predominantly starts as the right-sided attacking midfielder/winger for his national side and shoulders the responsibility for creating goal-scoring opportunities for his teammates.

Apart from Cuadrado, Rueda will also hope that strikers Duvan Zapata and Alfredo Morelos step up from the start or from the bench and help Colombia go into the knockout stages with a win over Brazil in their final group game.

Although both squads are filled with talent, Brazil will have the upper hand for sure going into the game against Colombia as they look to bank on their superb form.

Brazil will want their attacking superstars to finish the job early while Colombia need to have the grit and determination and not make it easy for the Selecao, hence, FootTheBall says, Brazil 2-0 Colombia.