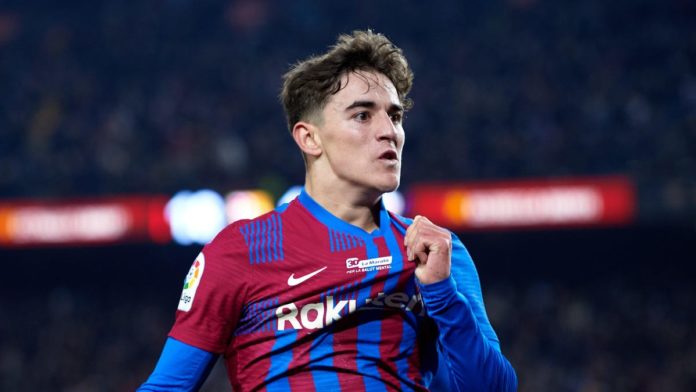 Football superstardom is an ever-changing beast, with talent scouts around the world always on the lookout for the next young player to ascend to the top of the sport – a summit which for years now has been dominated by monumental talents of Lionel Messi and Cristiano Ronaldo.

However, with the Argentinian magician and CR7 now entering the twilight of their careers – although certainly not done with quite yet – it seems that Kylian Mbappé and Erling Braut Haaland are the men most likely to be hitting the headlines on the best football news sites in the coming years.

That talented duo may not be alone in hogging the limelight though, as hot on their heels comes a clutch of supremely talented youngsters. Destined to star on the biggest stages, and attract the support of fans taking advantage of the top online betting offers for new customers, the following five under-18s look a good bet for future success.

A defensively minded midfield dynamo has been the lynchpin of many a great side – Claude Makélélé, N’Golo Kante, Fernandinho and Fabinho to name just four. Rare jewels if you can find them, these players can be men to build your side around.

As such all major clubs are always on the lookout for those players who can fill the dual role of defensive shield and driving force, and in recent months many heads have been turning to look in the direction of Club Brugge’s teenage talent, Noah Mbamba.

An adept and clean ball winner, and showing a positional awareness which belies his years, Mbamba’s composure under pressure and ability to burst from midfield is already drawing comparisons with Patrick Vieira. Of course, he has a long way to go to match the success of the Arsenal and France legend, but this young man has all the tools needed to succeed.

And turning to the attacking side of the midfield, Fenerbahce’s young Turkish talent Arda Güler is another man to keep an eye on in the coming years.

Quick and nimble, Güler’s main attributes are an ability to beat the first man, finding space to pick a pass, excellent vision, and impressively accurate delivery. Bursting onto the scene in 2022 when breaking into the Fenerbahce first team, the Ankara native is already attracting the attention of clubs from Europe’s major leagues. And with three goals and three assists in just 255 minutes of playing time in his debut season, it’s easy to see why!

Over the years there has perhaps been no country so prolific at blessing the world with mercurial footballing talent as that famous soccer mad nation of Brazil. Ever since a certain Pelé lit up the World Cup in the late 1950’s, the stream of incredible talent has continued apace – Rivellino, Socrates, Ronaldinho, Ronaldo and Vinicius Junior to name just four.

Selecting the newest star from such a deep pool of talent is no easy task, but the man leading that race in the eyes of many a shrewd judge is Ângelo Gabriel of FC Santos.

Appearing for his clubs under 20 side at just 15 years of age, Gabriel then made his full Santos debut only two days after his 16th Birthday – beating Pelé who first appeared for the famous club at 16 years and 13 days. A fleet-footed right-winger, with the ability to beat defenders with a burst of pace or a trick, he is still a little rough around the edges at times, but that raw talent looks set to take him on to bigger and better things.

One thing always sure to grab the attention of scouts is the most valuable of footballing commodities – goals. No wonder then that Dortmund youngster Moukoko has been attracting so much attention.

With Erling Haaland rattling the goals in for the senior side, Moukoko was busying himself in amassing a staggering record for the club’s under-17 and under-19 outfits – hitting the net on no fewer than 141 occasions in just 88 appearances. With that kind of output, it was no real surprise to see Moukoko becoming the youngest player in the history of the Bundesliga when appearing as a substitute for Haaland at the age of 16 years and 28 days.

Understandably mainly a backup to Haaland since breaking into the Dortmund first team squad, Moukoko has nevertheless compiled an impressive record of 5 goals in just 744 minutes of football and looks set to be handed greater responsibility following the departure of the big Norwegian.

With Xavi now managing the club and Iniesta plying his trade in Japan, Barcelona fans may have been wondering when the next brilliant midfielder would come along. Little were they to know, but they wouldn’t have to wait very long at all.

Not satisfied with already having the exceptional 19-year-old Pedri in their ranks, 2021 saw an even younger star thrust into the first-team spotlight in the shape of 17-year-old Pablo Martín Páez Gavira, or simply Gavi for short.

Brilliant at taking the ball on the turn in the centre of the park, Gavi is a natural at sniffing out the space and progressing the attack, showing intelligence and vision to complement his ball carrying and link-up play.

Weighing in with two goals and five assists in a breakout 21/22 campaign, the 6th of October 2021 saw Gavi handed an international debut for Spain, becoming the youngest player in the history of La Roja. With ability to spare and Xavi as his mentor, it is no surprise that this youngster is amongst the most admired new talents in the game.