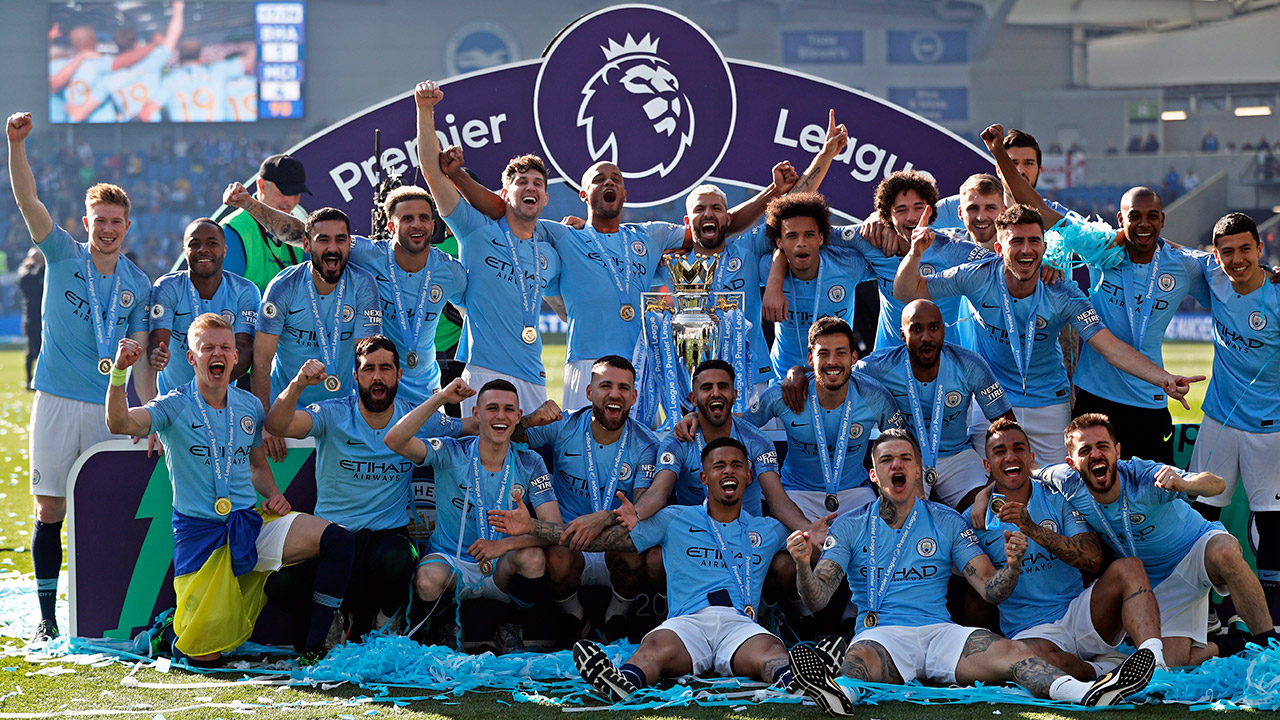 It was deja vu again in England when Manchester City won 4-1 away to Brighton on Sunday to claim this season’s Premier League title ahead of Liverpool, who defeated Wolves 2-0 on the final day of what has been a dramatic season.

Goals from Kun Aguero, Aymeric Laporte, Riyad Mahrez and Ilkay Gundogan gave Pep Guardiola’s team an incredible 14th consecutive league win on an afternoon where the final destination of the title was in doubt for just under 40 minutes.

The final game of the season was always going to be dramatic with Manchester City and Liverpool both having chances of lifting the title.

Manchester City kicked off in Brighton’s Amex Stadium knowing a win would be champions, while Liverpool took on Wolves at Anfield knowing they needed to win and hope that City didn’t.

The drama began when Sadio Mane opened the scoring for Liverpool in the 18th minute at Anfield.

That goal lifted Liverpool above City in the classification and there was further joy for Liverpool fans when Glenn Murray headed Brighton into a shock lead over Manchester City in the 27th minute.

Murray’s goal meant City now had to score twice to lift the title, but they were level just a minute later when Aguero collected David Silva’s back-heel, turned and beat Matt Ryan with a low shot.

Brighton were pegged back in their own half as Manchester City controlled nearly all of the ball and it was no surprise when Laporte put City ahead with a powerful header from a corner eight minutes before halftime.

That goal took City back to the top of the table and there was nothing Liverpool could do to stop them.

Jurgen Klopp’s men may have held slim hopes that Brighton could draw level, but City gave them no chance in the second half when Guardiola’s men tightened their grip on the game.

Mahrez made the title safe after turning on the edge of the area before hitting a vicious swerving shot and Ilkay Gundogan scored another screamer to add a fourth.

Citywin the league with 98 points, while Liverpool finish second on 97. It will be scant consolation for Liverpool fans, to know their side is the only team to win over 90 points in a season and not claim the title, but things will look better if they win this season’s Champions League on June 2nd.

Elsewhere in the Premier League Chelsea finish third after a 0-0 draw away to Leicester City.

Tottenham assured fourth place with an entertaining 2-2 draw at home to Everton, while Arsenal are fifth after 3-1 win away to Burnley, thanks partly to two goals from Pierre-Emerick Aubemayang.

Manchester United’s miserable end to the campaign ended as they lost 2-0 at home to already relegated Cardiff and Ole Gunnar Solskjaer’s job could be in danger after another terrible display.

Newcastle United beat Fulham 4-0 away from home, while West Ham won 4-1 away to Watford, who will play Manchester City in next weekend’s FA Cup final.

In other action, Crystal Palace and Bournemouth ended the season with an entertaining 5-3 win for Palace, while Southampton and Huddersfield drew 1-1.