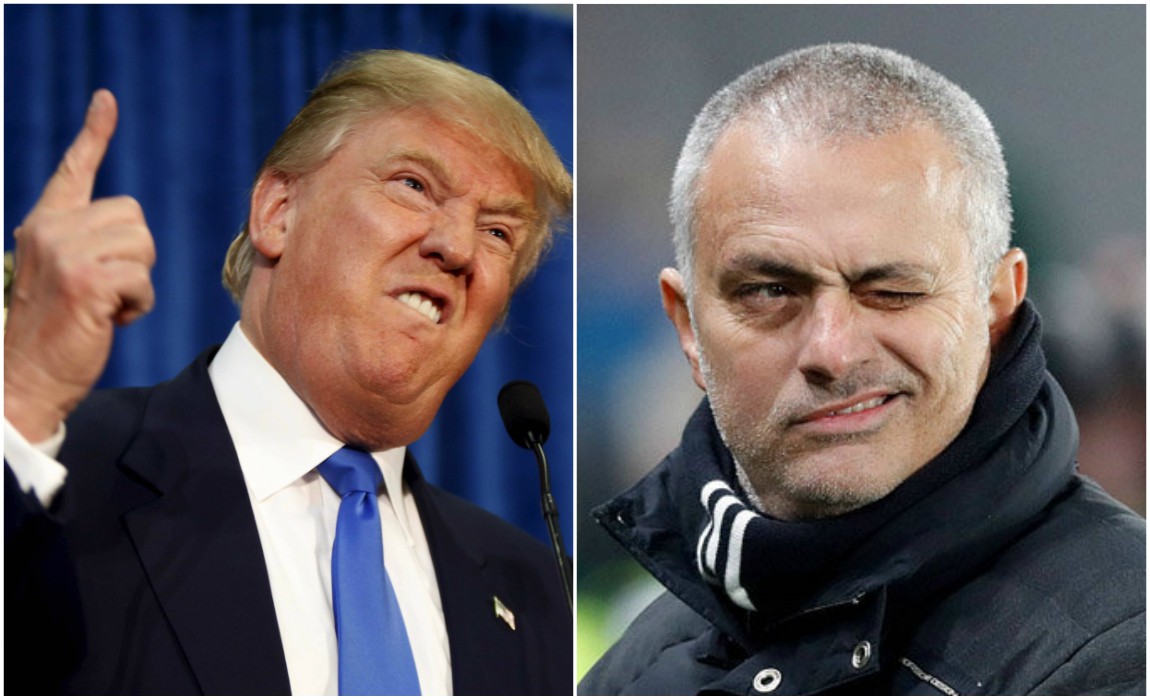 Is Jose Mourinho, the Donald Trump of football? Or is Trump the “special one” of world politics? Both are masters of diversion, both believe that dark forces – the FA, the FBI, the media – are plotting against them. They see conspiracies all around, create enemies to rally their teams and supporters, specialise in siege mentalities and a burning sense of injustice.

In early October 2016 the comparison would have been funny, poignant and irresistible. Back then, both were larger-than-life characters who seemed to make a specialty of manipulating the press, fascinating modern case studies in media management for the way they both seemed able to effortlessly distract reporters from the story at hand. Trump could have the cream of US political journalists chasing their tails with a single tweet, while Mourinho could get Fleet Street’s finest football reporters to ignore the fact his team had played badly with a throwaway comment about a match official.

In that brief golden age, when Mourinho was Old Trafford’s latest furious loser and Trump was the chump and pantomime pillock who was five points behind Hillary in the polls, we were all at it: pillorying Jose and Donald as the doyens of distraction and masters of media management, conjurer-slick as they performed their dark magic in plain sight. It was kind of funny.

It’s all got a whole lot more serious since.

Trump’s jaw-droppingly misogynous tips on “pussy-grabbing”, despicable as they were, have been upstaged by unverified claim of “Kompromat”. Stories of Russian interference in the US election process have been superseded by talk, again unverified, of Trump as potential Russian puppet.

It’s all too dark and dangerous for Mourinho. His media games are trivia by comparison – a referee smirched here, a manager undermined there, the disparaging of opposing players and fans. His team has even started winning again – so there’s even an occasional smile and kind word.

Trump complained the US election was fixed before a vote was cast. Mourinho questioned Manchester referee Anthony Taylor’s ability to officiate the Liverpool v United game after the pressure from Merseyside rumblings about Taylor’s neutrality and his Manchester address.

Since returning to English football in 2013, Mourinho has tested the FA with continual sideshows and confrontations to distract attention from serious team issues. He called Arsene Wenger a “specialist in failure”, spoke repeatedly of a “campaign” against him by broadcasters, imposed a media silence and was banned from the touchline within three months of the football season getting underway.

But by far his worst episode was the humiliation and sacking of Chelsea team doctor Eva Carneiro. A smokescreen worthy of Trump himself as Mourinho began to lose control of the Chelsea dressing room – a failing that would eventually cost him his job.

At the end of Manchester United’s 4-0 defeat to Chelsea in October the papers were full of what Mourinho might have shouted into the ear of Chelsea manager Antonio Conte rather than United’s wretched performance.

Trumped By The Donald

But only death, impeachment or resignation can save us from at least four years of President Trump and his weapons of mass distraction. As fresh, but unverified, detail emerged about Trump’s alleged links with the Kremlin, the president-elect was causing digital uproar by tweeting about his reality show The Apprentice and insulting actress Meryl Streep.

As the new leader of the “free world” the stakes are somewhat higher. America’s new president has to be held to account and his business dealings studied in meticulous detail. Instead, reporters find themselves scurrying around trying to grasp Trump tweets about so-called “illegal votes”, flag burning and Broadway actors.

What Trump and Mourinho share is an arrogance and self-belief that their words are not mere language like the utterances of others. That blunt-instrument certainty that makes them incredulous that we don’t get the purity of their meaning and oblivious to the notion that others might look for nuance, context or interpretation.

So far it’s all working out for the Donald – at least in his own Trumpian terms. Newly inaugurated, he’ll pout, mug and shrug his way through early days in the Oval Office and we’ll wait for the next funny line. But is he really that clever and devious? Will Trump, his businesses and other matters stand up to four years in the heat of international media interrogation that life in the White House brings? It’s hard to imagine he can distract and wrong-foot the world’s press for much longer.

There are tactical similarities between Trump and Mourinho: politics and football management attract messiah types with total self-belief – and they both instinctively know how to deflect blame and turn defence into attack. They appear to be sharing a media-management playbook. And they make for irresistible copy, if you are a journalist.

But there the similarity ends. One is manager of Manchester United – the other thinks he’s saviour of the “Free World”. There’s the difference, no amount of distraction can disguise that.

(THE AUTHOR MARTIN SMITH, SENIOR LECTURER IN JOURNALISM, SHEFFIELD HALLAM UNIVERSITY. THIS ARTICLE WAS ORIGINALLY PUBLISHED IN THE CONVERSATION.)