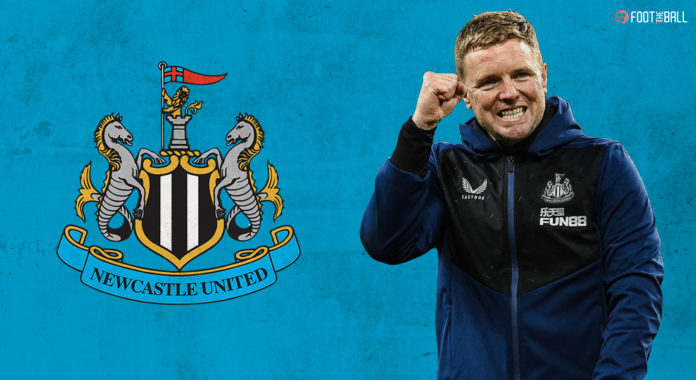 November 20 2021, 12 matches played, zero wins, six draws, six losses, bottom of the table in the Premier League. February 13 2022, 23 games played, four wins, nine draws, ten defeats, 17th place (with a game in hand). It’s been a remarkable turnaround for Newcastle United under new manager Eddie Howe who has taken the Magpies out of the relegation zone after a horrendous few months at the start of the season.

They are still just four points above the drop zone but have played a game less and now have high hope for surviving the relegation.

And Newcastle need to survive as relegation could throw a massive spanner in the works of the new owners who are ready to splash the cash to make the club great again.

So, Eddie Howe, with the same players, has managed to turn things around at the St. James’ Park.

To see the improvements under Eddie Howe, we first need to look at the club’s state before his appointment.

On November 20, Newcastle were dead last in the Premier League with only nine points from 12 games. The Magpies had scored 15 goals, the 12th highest in the league, but it was the other end of the pitch where things were going wrong.

They had conceded 17 goals, the most in the league and 4.44 more than the expected goals allowed (xGA) had predicted (the second-worst).

Since Howe took charge, they have won 15 points in 11 matches, making them the 11th best team in the league since his appointment.

Their goals have decreased, but they have since made massive improvements in defence where they have conceded 16 goals, the 11th best in the league. Taking the xGA model, Newcastle have conceded 2.26 goals less which is a fantastic transformation.

They are still far from being a good side (their 4-0 loss to Leicester City case in point). Still, under Howe’s mentorship, they are almost sure to avoid relegation with the addition of quality players in the January transfer window.

One of the first changes that Howe implemented was to ditch the three-at-the-back formation for a 4-4-2 or 4-3-3 one. The reason was simple, Newcastle needed to win the midfield battle.

And the reason for that was except for Allan Saint-Maximin, Newcastle don’t have a player that can be the attacking force for the team.

According to stats from Soccerment, Saint-Maximin averages 4.77 dribbles per 90 minutes which is almost thrice more than the second-best player on the team. He has also been the highest scorer for the club since Howe’s appointment.

However, most of his teammates are what can be described as hard workers. Players like Sean Longstaff, Joelinton, and several others can run for 90mminuites, make tackles, and slog it out. But they aren’t the ones who can produce a brilliant through ball, take 2-3 players out with a dribble, and this was what Howe had to develop a system that harnessed the talents of these players.

And Newcastle have now actually started to build up from the back to get the team suited to a specific style of play.

In defence, since the arrival of Kieran Trippier, the right-back now remains a little defensive as the former Atletico Madrid’s man works his magic on the right. This has resulted in two goals for the Englishman.

Similarly, the addition of Chris Wood from Burnley has given them a target man other than Callum Wilson. The New Zealander has responded well with three goals.

Meanhwile, Joelinton has been in such a good form that there is no place for Bruno Guimaraes on the team.

Coming back to Saint-Maximin, Howe has given him the free license to cause mayhem on the left flank, which he is doing efficiently.

Howe can now also call upon the services of Burno Guimaraes, who can be the perfect midfield lynchpin for the Magpies. The plan for Howe is simple, to play a more fluid style of football that demands full-back to provide the width and put in perfect crosses, wingers to cut inside, and the midfielders to stop the opposing team’s rhythm.

Liverpool did this quite effectively, especially in the 2019-20 title-winning season. However, Newcastle have a long way to go before having a team that can do that.

When Eddie Howe took over, we were 19th and hadn’t won all season. He’s since managed 12 games in the league. Has only lost to Leicester, Liverpool, Arsenal and Man City. Three wins in a row. 4 points clear of relegation with a game in hand.

Howe’s appointment did have some impact as the Magpies took four points from his first three games.

However, then came the rude shock they were swatted aside by Leicester, Liverpool and Manchester City. This left them at 19th, courtesy of goal difference. However, patience was the virtue of Howe’s tactics began to take shape.

The following five matches have brought them 11 points which eventually got them out of the relegation zone.

And in those five matches, Newcastle had only had more possession than the opposing team once. But that didn’t affect their offensive play as they scored seven goals in the last five matches while they only scored three goals in Howe’s first six matches.

They also scored more than the expected goals in three of the last five matches. Their progress can be more accurately measured after their next few games where they face Chelsea, West Ham, Brighton, Brentford, and Crystal Palace.

Change, the takeover, learning to enjoy, motivation, boredom, Eddie Howe, building a platform for #NUFC, the need to work, getting older – an interview with Jonjo Shelvey at 30 (almost).https://t.co/sC7t5PQt2M

All these teams play their distinct style of football, which will give a better glimpse of how Eddie Howe’s men cope with it.

The season has been challenging for Newcastle and still is far from perfect, but they can now be sure that things will only go up from here with the players they have signed and Eddie Howe.