City win at the death! 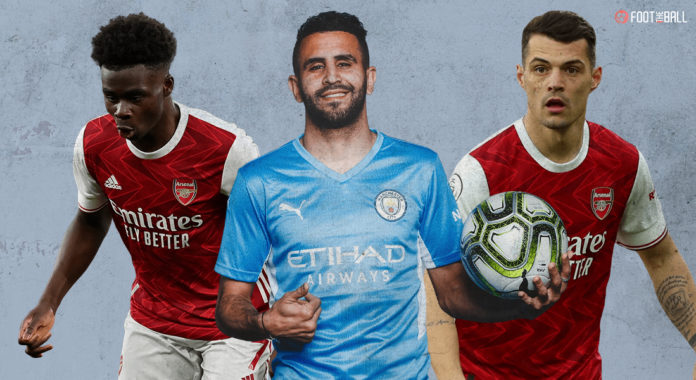 It was a pretty even opening 15 minutes, with some smart runs and quick attacks. There was a nervy moment for City as Ederson had to stretch and stop a dangerous move forward by Martin Odegaard. Though there was a bit of contact, it was deemed to be minimal and no penalty was given.

No clear-cut chances just yet…

But plenty of promising play! 👏

The first shot on target came from Gabriel Martinelli, racing into the box from the left and producing a fine stop from Ederson. The Gunners were much the better side, putting City under the ramp as the first goal came at the halfhour mark. Kieran Tierney’s run and low pass was swept home emphatically by Bukayo Saka.

WHAT A GOAL! SAKAAAAAAAAAA! 🌶️

Martinelli was proving to be a constant menace, curling a shot just wide before beating Joao Cancelo and driving a low ball across the face of goal. Pep Guardiola certainly needed to wake his team up at halftime if they wanted to avoid a first defeat in 10 league matches.

HALF TIME | Behind at the break…

The second half started in much the same fashion, but City were awarded a penalty within 10 minutes. Bernardo Silva shimmied past Granit Xhaka, who felled the Portuguese by pulling his shirt. A minor scuffle broke out regarding the same but Riyad Mahrez kept his head to send Aaron Ramsdale the wrong way and equalize.

A chaotic minute followed. First, Aymeric Laporte’s back header to Ederson looped over the goalkeeper and was cleared on the line by Nathan Ake. The clearance fell straight to Martinelli who blazed his shot wide instead of into the empty net. From the ensuing goalkick, Gabriel Jesus turned the ball away from Gabriel who fouled him to pick up his second yellow card.

👀 Was the referee right to send Gabriel off here? pic.twitter.com/2tFfrznbvR

City, as expected, controlled most of the ball from that point onward. Arsenal remained a threat on the counter, but with a man light, they could not do much. City’s shooting was off radar uncharacteristically but they finally scored once again. A deep cross into the box made its way to Rodri who placed the ball past Ramsdale.

93. After Laporte's effort is blocked, Rodrigo is there to poke home a last-minute winner!! 🤩

Here are the three key takeaways from this absorbing clash:

ARSENAL ARE NO SLOUCHES

It was one of the best performances of the season by the Gunners, despite missing Mikel Arteta on the touchline. They hurried and harried City all throughout the first half, breaking up any attacks and countering quickly. Saka’s goal was a deserved reward but they could have added more.

Martinelli had two decent openings, including an open goal, while their buildup play itself warranted more. However, one moment of loose defending proved to be their downfall, with Xhaka’s dangling leg followed by a shirt pull. Gabriel’s sending off compounded matters and they were doing well to hold on, but were undone right at the last.

It has not been the all-conquering City side in the past two games. Brentford were well-valued despite their one goal defeat and Arsenal were definitely the better side for almost an hour. The defensive shape was very disjointed, leaving spaces in behind the Gunners’ attackers to run into.

Converts the penalty well to bring Manchester City level and get a goal involvements against the Gunners once again! 👏👏#ARSMCI pic.twitter.com/7sn6MEVwHI

Cancelo in particular struggled mightily against Martinelli, but things got better since the penalty. The one-man advantage was a blessing in disguise and they found a winner right at the last to go 11 points clear at the top.

Certainly a possibility in light of recent performances and of course today, despite the defeat. Arteta has turned his side into an attacking machine, with Alexandre Lacazette being the embodiment of the hard working spirit. Odegaard, Saka, Martinelli all look hungry and ready to go in search of wins every time they step onto the pitch. The chasing pack will have to work their socks off in order to dislodge Arsenal from fourth.