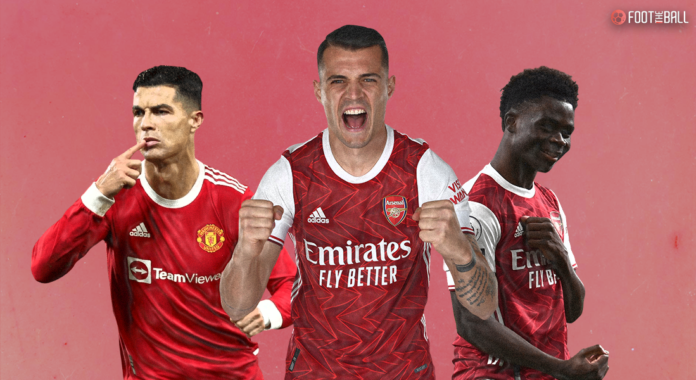 The race for the top four featuring two unpredictable teams. Arsenal and Manchester United were both in need of points to get the coveted fourth spot.

It was a fast start by the Gunners who took the lead within three minutes. A cross into the box was not dealt with by the away defence. The ball dropped to Bukayo Saka whose curling shot was saved by David de Gea. Unfortunately for him, the rebound went straight to Nuno Tavares who scored.

The Red Devils tried to muster a quick response. Cristiano Ronaldo set Anthony Elanga free who drew a low stop from Aaron Ramsdale at his near post. The Arsenal goalkeeper almost played his side into trouble with a poor pass out. However, Bruno Fernandes’ chipped effort was blocked away by Gabriel. Arsenal were feeling the heat as Diogo Dalot smacked the crossbar from distance

However, it was the home side who doubled their lead. Some lovely interplay saw Martin Odegaard slip in Saka who was felled by Alex Telles. Eddie Nketiah finished from the loose ball but was adjudged offside. VAR then intervened for the penalty call and a spot kick was awarded. Saka made no mistake and finished expertly like last week.

🔥 BUKAYO PUTS AWAY HIS PEN!!

👊 A SECOND GOAL FOR THE ARSENAL

💪 COME ON YOU GUNNERS

This time, United did make their dominance after goal count. Nemanja Matic’s cross was turned home by Ronaldo with his left boot to halve the deficit. It was his 100th goal in the Premier League but United could have fallen further behind. De Gea produced smart saves from Mohamed Elneny and Odegaard in between Ramsdale keeping out Telles to keep the score 2-1 at halftime.

United were given a great chance to equalise after Tavares fouled Matic inside the box. However, Fernandes’ effort came off the base of the post with Ramsdale going the other way. The away side were pouring forward now. Sancho’s shot was saved by Ramsdale before Ronaldo’s goal was ruled out for offside. Arsenal were struggling to assert themselves in the second half.

Ronaldo has the ball in the net, but it's ruled out for offside.#MUFC | #ARSMUN pic.twitter.com/HvLBJcCDdB

Just when it looked like United would find the leveler, Arsenal scored another. A bout of concerted pressure saw the ball break for Granit Xhaka. From more than 20 yards out, he took aim and rifled a strike past the despairing dive of De Gea. With 15 minutes to go, it felt like a mountain too far for United to climb. Moreover, the bunch of changes were not helping the flow of the game either.

70’ | GOAAAALLLLL! Xhaka with a screamer from outside the box!

United were not able to muster a response and fell to another defeat. Arsenal now in pole for fourth.

After the hammering of Chelsea, the Gunners came into this wanting more. The youthful exuberance is unmatched in the league. Mikel Arteta has drilled his side into not thinking of themselves as the underdogs despite their age. That’s the way it went in the opening 30 minutes. Granted, they were helped by defensive lapses but the finishing was top notch. Saka has been the brightest spark and continued to raise his worth.

Nketiah has been a great introduction while Xhaka produces those goals annually. However, the only real concern for Arteta will be Tavares can be extremely erratic at times. With no other natural leftback, the manager has to manage his young star carefully.

Gone are the days of Sir Alex Ferguson having the wool over Arsenal. Ralf Rangnick is managing a sinking ship that needs Erik ten Hag. Ronaldo played well and got his goal which was deserved. What really cost them the game was their own profligate nature. Sancho, Dalot, Telles and Fernandes had great chances. Fernandes’ missed penalty could have made it 2-2 but it did not.

Why Ronaldo did not take the spot kick will be a matter of long debate. However, they had their chances in both halves, especially after the first two goals from Arsenal. However, these kind of performances will not make the task for Ten Hag any easier. Moreover, De Gea made some key saves that kept the scoreline a bit respectable.

It does look like it after this result. Spurs and Arsenal play in the North London Derby whose winner will be in pole position. United fall six points behind the Gunners, having played a game more. Therefore, it is looking like the next season will be without Champions League football.