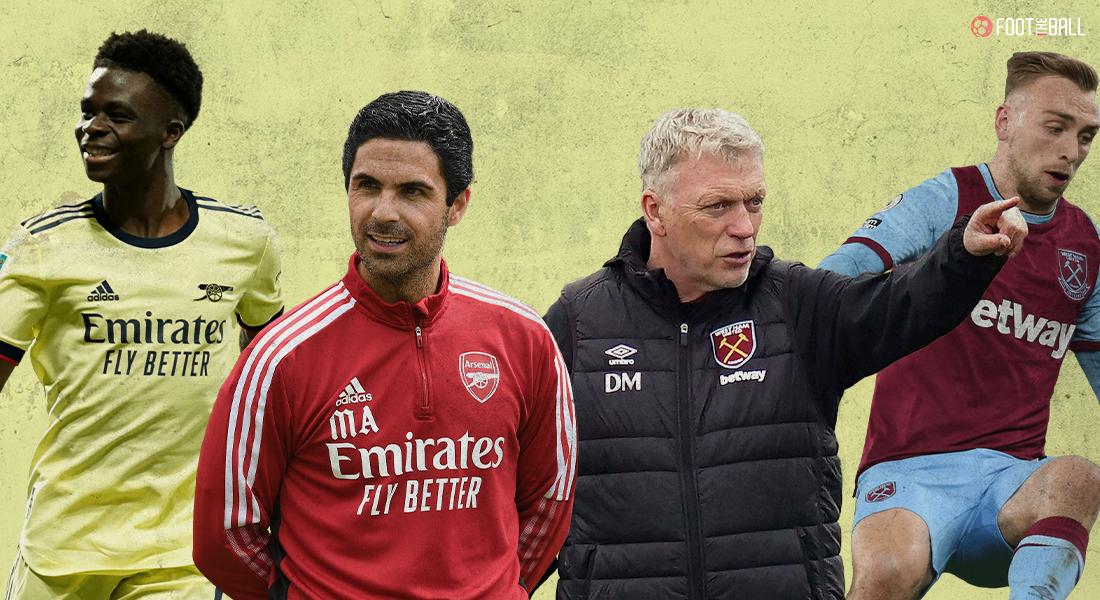 A London derby with much at stake kicks off on Dec. 15, 8 PM GMT as surprise UCL qualification contenders West Ham United travel to the Emirates to face Mikel Arteta’s Arsenal.

Just two points separate the two clubs, with West Ham currently occupying the last UCL qualification spot, at 4th with 28 points, while Arsenal sit 6th with 26 points. Both clubs come into the game after hitting a minor roadblock in their form sheet.

Arsenal hit their stride after a rough start to the season to surge up the table. This surge was recently extinguished by consecutive losses to Manchester United and Everton. On the other hand, West Ham United started the season flying out of the blocks but have recently found wins more difficult to come by, winning only one of their last five league games.

The news on the injury front is a relief for both managers. Other than the long-term absentees, both David Moyes and Mikel Arteta will be able to choose from a full crop of playing personnel.

For Arsenal, Sead Kolasinac remains the only long-term absentee, suffering from an ankle injury. Industrious midfielder Granit Xhaka has recently come back from an injury and played a part against Southampton. There are no suspended players either. Arteta will be able to pick pretty much a full-strength team for consecutive games after a long time. Arsenal’s start of the season was infamous for the number of unavailable players so this clean slate in the injuries department comes as a relief for the Spaniard. The same could be said for his opposing number as well.

West Ham United have surpassed all expectations so far this season and credit has to go to David Moyes for his expert handling of the squad. Only two players, Angelo Ogbonna and Kurt Zouma are expected to miss out on the trip to the Emirates. Ogbonna has a cruciate ligament injury which has most likely ended his season already. Zouma, meanwhile, suffered a hamstring injury at the start of the month and is expected to be out till mid-January at the very least. No suspensions either mean that the whole contingent is available to David Moyes beyond the two central defenders.

After a nervous few games at the beginning of the season, Arsenal’s attack showed signs of coming to life in their last league game against Southampton, winning 3-0. In the absence of prolific efforts from their strikers (Aubameyang- 4 goals in 14, Lacazette- 2 in 11), their midfielders have stepped up and showed their strikers how to finish. Hale End graduate, Emile Smith-Rowe has top-scored for them this season, with 5 goals in the league already, to go with 2 assists, having a goal contribution every two games.

Big decision to be made by Arteta on Wednesday night regarding team selection.

Does Smith Rowe come straight back in to this line up?

If yes, who makes way?

Although Martin Odegaard has started contributing more, scoring most recently in their game against Southampton, Smith-Rowe will once again be the creative hub of the team. “ESR”, as he is called by Arsenal fans, was not given an outing against Southampton, and with such a quick turnaround between that game and this, Arteta could have been saving his talisman for this game. Ironmen duo of Rice and Soucek will have their hands full dealing with the tricky No10 from Arsenal.

While the midfield battle between Arsenal and West Ham, anchored by Rice and Soucek will be interesting to watch, Arsenal’s defenders will have to be on the lookout for Michail Antonio’s elusive movement. West Ham’s all-time top scorer in the Premier League has been a player reborn after being moved to the striker position by David Moyes. Now armed with ample service in the form of Jarrod Bowen, Pablo Fornals, Said Benrahma and Manuel Lanzini, Antonio has taken his game up another notch.

The Jamaican international has 6 goals and 4 assists in 15 appearances in the league. He will be looking forward to giving a trying time to the duo of Ben White and Gabriel with his aerial prowess and predatory movement in the box.

Both these teams come into the game with some up and down form but Arsenal have recently started to gain some steam at their home ground. A quick turnaround would also help Arsenal, who have a deeper squad than West Ham, who have been struggling with fatigue already. West Ham can always be counted upon to give a spirited performance under David Moyes, but Arsenal’s squad strength and home ground advantage should edge this game in their favour as they wrestle control of that final UCL spot from their London neighbours. FootTheBall predicts Arsenal 2-1 West Ham United