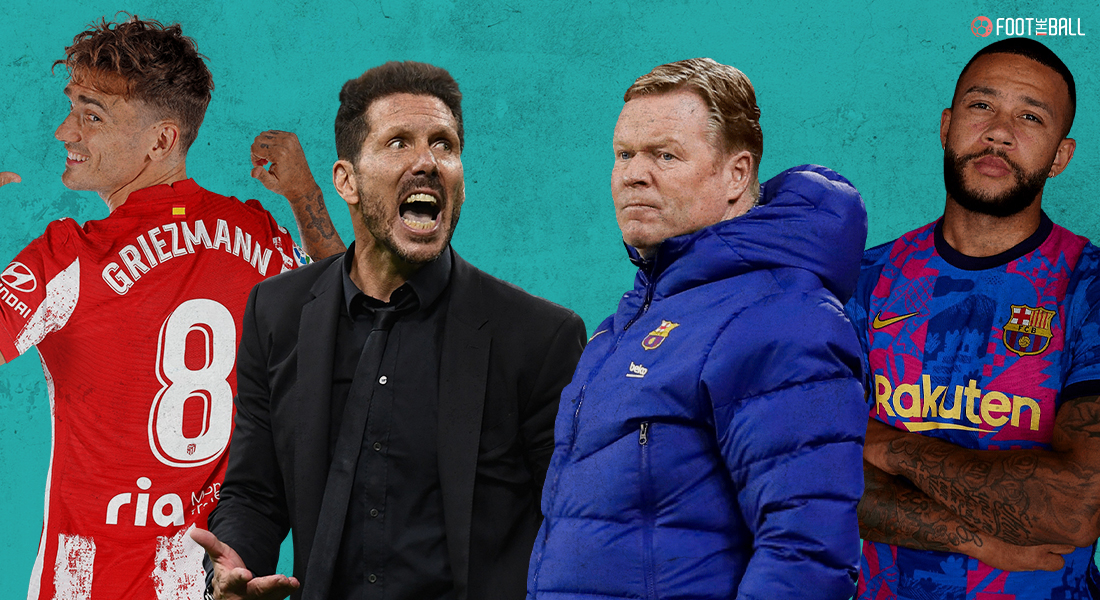 MATCH PREVIEW: ATLETICO MADRID VS BARCELONA, LOS ROJIBLANCOS MEET A WOUNDED BLAUGRANA WITH BOTH SIDES LOOKING FOR A KEY WIN

Atletico Madrid host Barcelona with both teams looking to make headway towards the top of the table.

Diego Simeone’s side suffered a shock shutout defeat to 19th-place Alaves last time but their 2-1 win over AC Milan midweek was a cause for celebration. Los Rojiblancos showed deep reserves of fight and energy as they won it deep into injury time. Atletico have not had their usual dominating start, struggling to score and keep clean sheets.

Nine goals in seven matches with six conceded suggest that more work is needed if they are to retain their title. Joao Felix’s poor form has been a cause of concern while Antoine Griezmann broke his duck against Milan and will be keen to fire again.

Barcelona, meanwhile, are in all sorts of crisis coming into this crucial early season clash. Having lost both their games in the Champions League group, the calls for removal of Ronald Koeman are louder than ever. As it is, he will not be in the dugout for his sending off against Cadiz. The

After 323 days out, @ANSUFATI only needed 10 minutes to score. pic.twitter.com/JkWoXGz9QZ

Blaugrana’s glaring scoring troubles have been well highlighted with Luuk de Jong yet to get up to pace. Memphis Depay has been trying his best but the veterans look like they are getting exposed too easily. The goalscoring return of Ansu Fati will be a big boost while the youngsters are sure to get more gametime too as has been the case so far.

Simeone has a fully fit squad to choose from while it remains to be seen who gets the nod in attack. Rodrigo de Paul and Renan Lodi should be back starting in midfield and defence respectively.

Barcelona remain without their trio of attackers but Fati has been on the bench for the past two games. Pedri’s return from injury is a welcome addition while Luuk De Jong might miss out.

De Paul has been one of the more important signings of the summer across La Liga. The Argentine midfielder is a true box-to-box player who impresses in attack. Though he has been limited to only three starts so far, his influence over this game will be key. He had 7.55 progressive passes, 9.59 progressive carries and 2.96 dribbles (all P90) over the last year putting him in the top 98-99th percentile of players.

Barcelona’s defensive shape has not been the greatest and they do leave gaps in the middle of the park. His experience will show up the youthful nature while De Paul will have runners alongside him to thread passes to.

Like De Paul, Barcelona have their own creative hub in midfield. Frenkie de Jong has been one of the few shining sparks till now. The Dutchman has two assists already along with a passing accuracy of 91% for the season so far over all types of distances. Furthermore, he has been involved in 2.67 shot-creating actions P90 but what has really been wonderful is his ability to remain calm under pressure.

Atletico have shown fallibility at the back and De Jong knows Depay is an ever eager attacker. If he is not marked well, he can use his repertoire of skills to unlock Simeone’s defence.

On paper, it seems to be that the win will be heading to Atletico given the form they will be entering the match in. Barcelona will have to try really hard and take their chances in order to take the points. FootTheBall predicts a 2-0 win for Los Rojiblancos at their home ground.