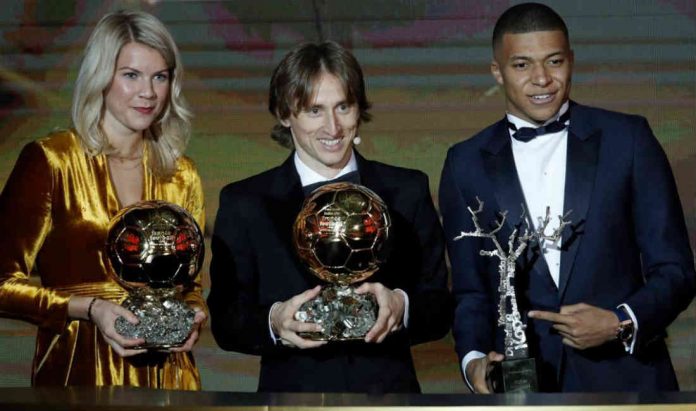 Real Madrid’s midfielder Luka Modric opened a new chapter in the Ballon d’Or (Golden Ball) history as he became the first Croatian to claim the best player award on Monday.

The 33-year-old received his trophy during a ceremony held in the iconic Grand Palace in the French capital. It was the latest recognition for his achievement and contribution throughout the year, following the UEFA Men’s Player of the Year Award and the Best FIFA Men’s Player.

Congratulations @lukamodric10 for winning the 2018 Ballon d’Or! End of the Messi-Ronaldo era?

Modric ended the past decade dominated by Cristiano Ronaldo and Lionel Messi for the award, as the two superstars claimed it five times apiece. The Croatian had also terminated Ronaldo and Messi’s 10-year duopoly in the FIFA award in September.

Prior to Modric’s honour on Monday, Brazil’s Kaka was the last one to have won the award in 2007 before Ronaldo and Messi’s supremacy loomed.

Modric spearheaded Croatia into the World Cup final for the first time in history in Russia, winning the tournament’s Golden Ball himself.

On the club side, the playmaker won the third straight UEFA Champions League title with Real Madrid, their fourth in the past five years.

Mbappe, who will turn 20 later this month, unsurprisingly bagged the newly-established Kopa Trophy representing the best U-21 player.

Founded in 1956 by France Football magazine, Ballon d’Or honours the player with the best performance over the year based on voting by football journalists. It was merged with FIFA World Player of the Year into FIFA Ballon d’Or in 2010, before the two awards were separated in 2016.