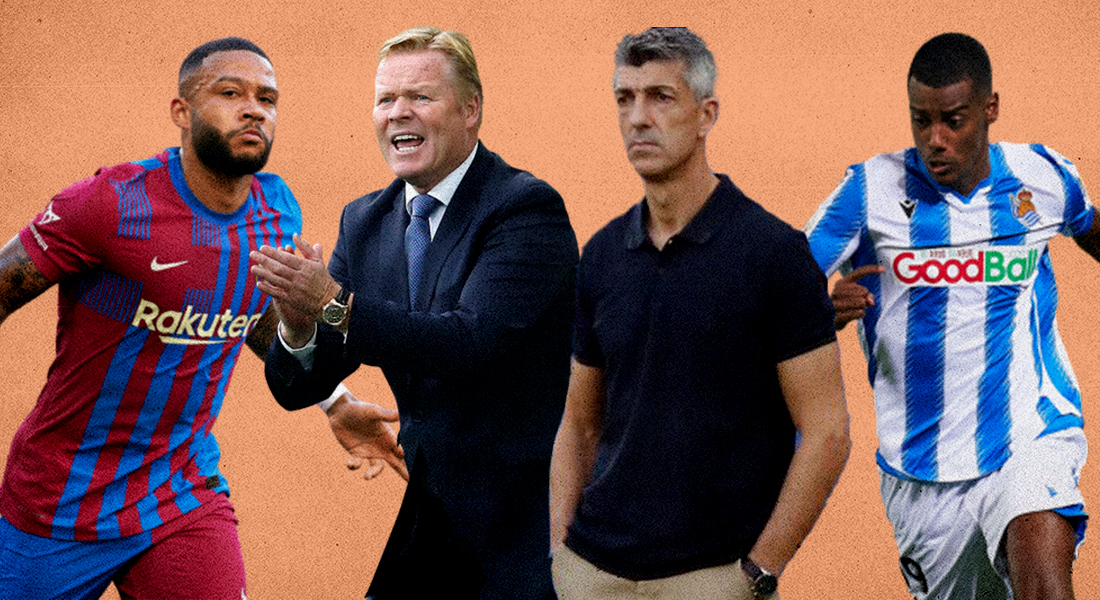 MATCH PREVIEW: BARCELONA VS REAL SOCIEDAD, CAN THE CATALANS START THE POST-MESSI ERA WITH A WIN?

Barcelona welcome Real Sociedad as they raise the curtains on a new campaign. The Sunday night fixture at Camp Nou would usher them into a new Messi-less era. It’ll be a week nearly since the legendary Argentine international left Barcelona. As the dust settles, the people of Barcelona would again turn their heads towards their favourite Catalan side.

Barcelona finished third in the league last time. They finished seven points adrift of champions Atletico Madrid and were overtaken by Clasico rivals Real Madrid. The Catalans had a slow start to the season and paid the cost ultimately. They hoped to start this season afresh. But they were jolted by a financial crisis which led to Lionel Messi leaving the club. They are now in a transitional phase and have only picked up free agents like Memphis Depay, Sergio Aguero and Eric Garcia. Ronald Koeman would be looking to find the ideal combination as they search for another league title.

Real Sociedad scraped to get a Europa League spot by finishing fifth in the league. They were collectively driven by young forwards Alexander Isak and Mikel Oyarzabal. Imanol Alguacil didn’t receive the backing expected as they had a quiet transfer window. Reinforcements have come in limited form in Diego Rico and Matt Ryan. Neither of them would go straight into their first team. hence the manager has to work with the unit that clicked last season and aim for a top-four finish.

For the first time in million years, Barcelona won’t be having a certain Lionel Messi in their squad sheet. The void left by the legendary Argentina international would be too huge to fill. Ronald Koeman has to battle with various injury problems to field a competent eleven.

This means Antoine Griezzmann has to fill in on the unfamiliar right-wing with Braithwaite playing as the striker. a debut for Depay on the left would complete the attack.

Also Emerson Royal might make his debut for Barcelona as the right-back. Pedri who refused a vacation after an exhausting season would slot into the midfield alongside the impressive Sergi Roberto and Sergio Busquets

Sociedad have couple of injury concerns in Nacho Monreal , Carlos Fernandes and Matt Ryan. They have some good news as Asier Illaramendi is back in training. Portu can also be confident of a starting place.

However, the return of the stars from national duty after Euros and Olympics would reinforce their squad. The coach can deploy a 4-2-3-1 with David Silva occupying his favoured number 10 position with Isak leading the line as a sole striker.

It looked like Memphis Depay was a smart bit of business by the Barcelona board this summer. The winger was picked on a free from Lyon to complete Barcelona’s attack. But now with Lionel Messi gone, he may be the focal point of their attack. Capable of playing through the middle or down the wings, Depay would provide a direct goal threat. He can also be a supreme creator from the wing.

His latest against Juventus in the ''Joan Gamper Trophy''

Depay had a successful euros and hit the ground running for Barcelona in the pre-season. A goal on his debut was followed by another sublime strike in the Joan Gamper trophy. He’d hope to continue his form and secure the points for his new side.

The midfield pivot of Zubimendi and Mikel Merino must be alert as Depay likes to drop deep and dance through the middle suddenly shifting gears.

Isak can do no wrong at the moment as he is in red hot form. The Swedish striker scored 17 times in 34 La Liga appearances last time around. He went to the Euros to represent his Sweden side without Zlatan Ibrahimovic. The Scandinavian country needed a talisman to build its attack around. Isak stood up and did the honours.

Isak is a tall, pacy striker with great dribbling ability and sublime finishing. His attributes were well noted at the Euros. Though he couldn’t get on the score sheet, he created numerous opportunities and came close to scoring. His performances have earned him some big reviews. He would look to push his limits in the new La Liga season as Sociedad aim for a top-four finish.

Isak is a direct goal threat and both the centre-backs must keep their guard up throughout the ninety minutes to prevent him from scoring.

Sociedad are always a tricky opposition for Barcelona. Besides the club would be under massive pressure to start the post-Messi era with a win. A home victory would also lift the morale of the fans. They possess the star quality to overpower their opponents. Koeman’s 4-3-3 would be key to exploit Sociedad’s defence.

Sociedad would bank on the pace of their forward line to get in behind Barca’s backline. A positive result could spark a revival for them.