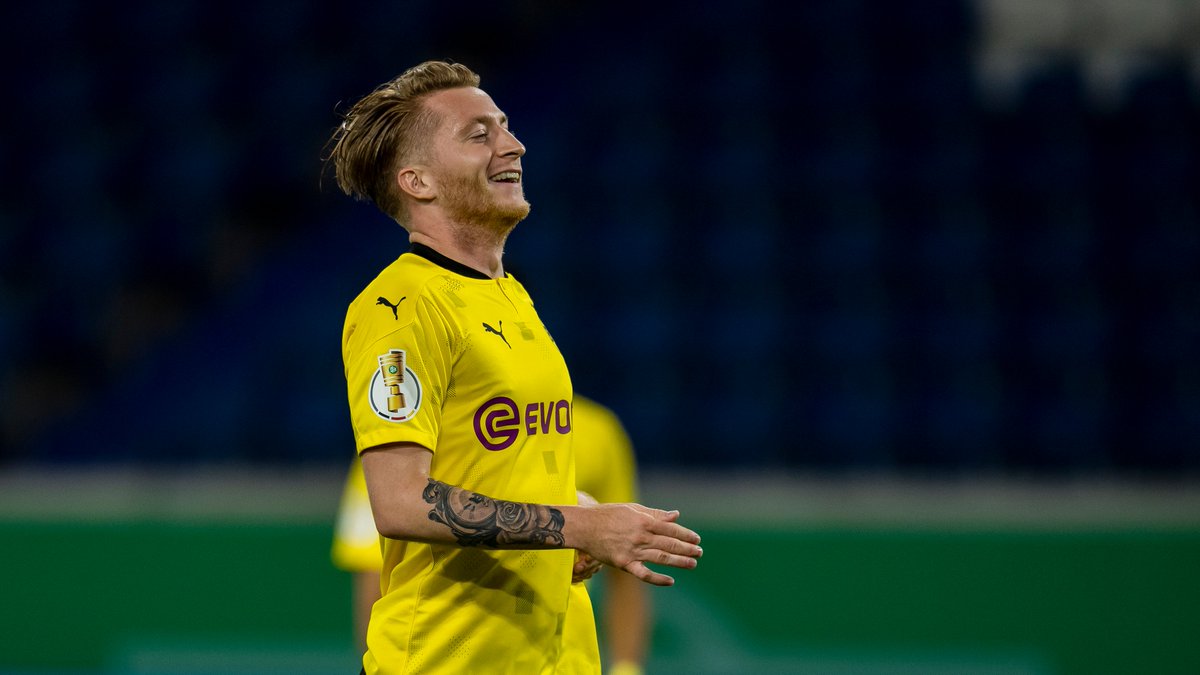 The top tier of German football will begin a new campaign on Friday, the 18th of September. Bayern Munich have been the undisputed champions of the Bundesliga for eight consecutive years now. Are we going to see a new face at the top of the Bundesliga table this season? Will the new signings bolster their teams’ chances to challenge Bayern for the Meisterschale?

FootTheBall looks at the preparation for matchday 1 of the Bundesliga 2020/21 season. This article covers the expectations from the big matches, the expected lineups, and score predictions for every Bundesliga fixture.

The Bundesliga tradition continues as Bayern Munich will host the first game of the new Bundesliga season on Friday. The Rekordmeister will play Schalke 04 in matchday one. All eyes will be on Bayern’s big money signing, Leroy Sane. After more than a year of transfer saga, the Bavarians secured the signature of Germany’s coveted winger.

Sane remains in contention to start against his former club. With Ivan Perisic and Philippe Coutinho back at their respective clubs after a successful loan spell in Munich, the expectations are high for Sane. He, along with Serge Gnabry, are earmarked to bring back the “Robbery” era at the Allianz Arena. Schalke will be a stern test to gauge their true potential as partners in crime, especially for the first game where Kingsley Coman shall not be available. The Champions League winner remains in isolation after he came in contact with a person infected with COVID-19. A new recruit from Paris Saint Germain, Tanguy Nianzou will also miss the opener with a thigh problem. Among other absentees, Jerome Boateng is doubtful for this clash.

The Royal Blues, who were a big disappointment in the attacking front last term have had a sensible transfer window so far. David Wagner will be pleased to work with Vedad Ibisevic and Goncalo Paciencia this term. The latter shall not feature at the Allianz Arena after concluding his move from Eintracht Frankfurt on Tuesday. Former Hertha captain, Ibisevic is expected to lead the attack for Schalke. Club captain, Omar Mascarell also made his return from a torn tendon injury by playing 45 minutes in an intra-squad friendly game. However, his appearance against Bayern is a doubt. Schalke will also face a hard time filling the void in the heart of midfield. Weston McKennie completed a loan move to Juventus this summer. There are high hopes from Nabil Bentaleb to replace the USMNT midfielder.

While Bayern thrashed Schalke by five goals to nil in their previous meeting at the Allianz Arena, the German champions could only edge past Schalke by a one-nil margin in the DFB Pokal clash contested in March this year.

Dortmund will play their opening fixture of the 2020/21 Bundesliga season in front of 10,000 home fans. Lucien Favre has been given one of the toughest games to start his new campaign. Dortmund host Borussia Monchengladbach.

Dortmund were quick to fill Achraf Hakimi’s shoes this summer. Der BVB signed Thomas Meunier from Paris Saint-Germain who will operate as a wing-back from the right flank. Lennard Maloney also made his way to the Signal Iduna Park from Union Berlin. Another promising player from England, Jude Bellingham was secured from Birmingham City. The 17-year old is expected to play a crucial role in the centre of the midfield. His name was on the scoresheet in Dortmund’s DFP Pokal first round fixture against MSV Duisburg. Dortmund comfortably qualified for the second round. However, Roman Burki suffered a hip injury which signals his potential absence for the Bundesliga opener. He joins the casualty list of Raphael Guerreiro, Nico Schulz, Mateu Morey, Marcel Schmelzer, and Dan-Axel Zagadou.

The Foals, on the other hand, will likely play without a few big names. Breel Embolo, Laszlo Benes, and the loan signing from Inter Milan, Valentino Lazaro were unable to take part in the training on Tuesday due to injuries. Some respite for the Monchengladbach fans as Alassane Plea was partly involved in the training while Dennis Zakaria completed a full session.

A Battle of the Borussias ⚔️

The first Topspiel of the season promises to be a good one 🍿 pic.twitter.com/uSfozfJk2U

Dortmund have won all of their last five competitive fixtures against the Foals with their previous clash ending in a two-one victory.

After another top-four finish last season, RB Leipzig will return in Bundesliga action on Sunday against Mainz. Under the guidance of Julian Nagelsmann, Leipzig are a force to reckon with. The Red Bulls were among Europe’s elite clubs last season as they reached the semi-finals of the UEFA Champions League.

Leipzig will be without their star forward, Timo Werner who completed his move to Chelsea FC this summer. Nagelsmann, however, will have Hwang Hee-chan who was purchased from Leipzig’s sister-concern, Red Bull Salzburg. Benjamin Henrichs, Josep Martinez, and Lazar Samardzic were the other new additions in the squad. Nagelsmann has already started his competitive campaign with a victory against Nurnberg in the first round of DFP Pokal 2020/21. Hee-chan, Amadou Haidara, and Yussuf Poulsen got their names on the scoresheet. Nonetheless, Leipzig will have to start their season without Ibrahima Konate and Konrad Laimer. They are reportedly unavailable due to a knee injury.

Successful debuts for our 1️⃣1️⃣ and 3️⃣9️⃣ on Saturday 🙌

The visitors, too, enter the new season with success in the first round of DFB Pokal. Achim Beierlorzer will also have a few new names at his disposal this season. Dimitri Lavalee joined from Standard Liege along with Luca Kilian who moved from SC Paderborn. Robin Zentner will likely get more minutes this season as Florian Muller was loaned out to Freiburg.

Leipzig were a nightmare for Mainz last season. The Red Bulls routed Mainz by a combined 13 goals in both the fixtures while keeping a clean sheet.

Wolfsburg looked resilient when they started their previous Bundesliga campaign as they remained undefeated till the end of October. Since then, it was a bumpy ride for Oliver Glasner and co. which saw them finish in the seventh position. Despite a poor goal scoring record, Wolfsburg have done little to strengthen their attack this summer. 18- year old Bartosz Bialek from is the only forward who arrived from Zaglebie Lubin. In the defensive department, Maxence Lacroix joined from Ligue 2 team, Sochaux.

There is a fixture headache for Glasner. Wolfsburg play in the UEFA Europa League’s second qualifying round on Thursday before hosting Bayer Leverkusen in the Bundesliga opener. Jerome Roussillon is in a race against time to be available for the Bundesliga game. Marin Pongracic and William are also doubtful for the first game. Kevin Mbabu will not make it to the Volkswagen Arena after suffering from a knee injury. Joshua Guilavogui remains suspended and is also unavailable.

Their opponents, Bayer Leverkusen, were among the top five best scoring teams last season. However, they have suffered setbacks after the departure of the attacking duo of Kai Havertz and Kevin Volland. Patrik Schick is expected to be the main man upfront in Leverkusen’s attack this season after sealing his switch from AS Roma. Luckily for Peter Bosz, there isn’t a long list of injuries. Only Leon Bailey, who lacks match fitness, and Paulinho with a knee problem are expected to miss the first game.

The previous encounter between the two ended in a four-one win for Wolfsburg at Bay Arena in May.

Koln have secured the services of Sebastian Andersson from Union Berlin. Jhon Cordoba has moved to the capital city to play with Hertha. Effzeh will play their opener without Ismail Jakobs, Florian Kainz, and Benno Schmitz as they are out with injuries. Anthony Modeste is a 50-50 to start the match against Hoffenheim.

Hoffenheim’s new coach, Sebastian Hoeness is expected to bring a new attacking flair in the team. Mijat Gacinovic will be in contention to start the game against Koln after completing his move from Eintracht Frankfurt this summer. However, the overlapping full-back, Pavel Kaderabek shall not feature for the Koln game after suffering a thigh contusion in the DFB Pokal first round. Stefan Posch, Benjamin Hubner, and Munas Dabbur are among the list of doubtful appearances for this clash.

What to expect from Sebastian Hoeneß 👀

In an exclusive Bundesliga interview, the new Hoffenheim boss lends insight into his coaching philosophy 🧢

Eintracht's main man with the upwards trend is staying in Frankfurt 📈🦅 pic.twitter.com/FmYgDBfK0c

Hutter will not have Jetro Willems (cruciate ligament rupture) and Evan N’Dicka (syndesmotic ligament lesion) for the first game of the season. Good news for the Eagles as Filip Kostic will be available after serving his suspension in the DFB Cup.

The visitors have added eight new players in their squad after sealing promotion to the Bundesliga. Having won the second tier of the Bundesliga, Uwe Neuhaus is aiming to stay in Germany’s prime football competition. Andreas Voglsammer is injured and is unlikely to feature from the left flank on Saturday.

Werder Bremen’s new loanee, Tahith Chong completed a training session on Tuesday. Milot Rashica also remains in contention to start against Hertha Berlin despite being rested for Tuesday’s session. Omer Toprak will miss the first game with a calf injury.

Ömer #Toprak will miss Saturday's Bundesliga opener against Hertha due to a calf injury.

The situation is slightly better for Bruno Labbadia. Hertha does not have any major injury issues within their squad. They have replaced Vedad Ibisevic with Koln’s star striker, Jhon Cordoba. Freiburg’s shot-stopper, Alexander Schwolow also moved to the blue half of Berlin this summer. Dedryck Boyata and Krzysztof Piatek returned to training on Monday.

A host of changes were witnessed in the Union Berlin squad this summer. Urs Fischer will have to do without new signing, Max Kruse who is suffering from an ankle injury. Another headache for Fischer in the attacking department is Anthony Ujah who is carrying a knee problem.

Augsburg will deploy Union’s former goalkeeper, Rafal Gikiewicz in the starting lineup. Their attack will feature Daniel Caligiuri who moved from Schalke.

Stuttgart are back in the Bundesliga and will try their luck in the first round against a stubborn SC Freiburg. Die Schwaben’s leading goal-scorer last term, Nicolas Gonzalez will have to wait for his first start in the Bundesliga. The Argentine suffered a muscle tear in his hip last week during a friendly game against Racing Strasbourg. Erik Thommy is also sidelined with an injury.

Freiburg will travel without Mark Flekken and Janik Haberer.