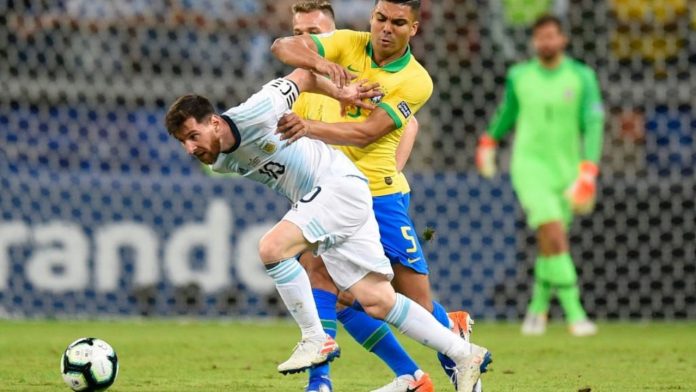 Gabriel Jesus and Roberto Firmino put the nails to the coffin as Brazil advanced to the Copa America final on Tuesday with a 2-0 victory over bitter rivals Argentina.

Brazil in the Final of Copa América ?

Jesus put the hosts ahead at the Mineirao stadium by latching onto Firmino’s cross and the Manchester City player returned the favor by setting up his strike partner after a counterattack.

The result came almost five years to the day after Brazil’s humiliating 7-1 World Cup semifinal defeat to Germany at the same venue, as the tournament hosts celebrated a berth in their first Copa America final since 2007.

Brazil will now face either Peru or Chile at Rio de Janeiro’s Maracana stadium on Sunday.

For Argentina, it marked another disappointing end to a major tournament. The Albiceleste have not won a trophy – the 2008 Olympic gold medal notwithstanding – since the 1993 Copa America and are still waiting for their first away victory over Brazil in a competitive fixture.

The defeat will also raise questions over the future of Argentina head coach Lionel Scaloni, who replaced Jorge Sampaoli after last year’s World Cup when it was reported that no other candidate was interested in the role.

Brazil head coach Tite made two changes to the team that beat Paraguay on penalties in their quarterfinal last Thursday. Filipe Luis failed to recover from a hamstring injury and was replaced by Alex Sandro while Real Madrid’s Casemiro returned from suspension in the place of Napoli midfielder Allan.

Argentina started with the same lineup that had started the 2-0 defeat of Venezuela in Rio on Friday.

Both sides looked reticent to take risks early and had few clear scoring chances until Brazil caught Argentina flat-footed in the 18th minute.

Veteran right-back Dani Alves started the move by dribbling past two defenders and releasing Firmino on the right. The Liverpool forward played a one-touch cross into the path of Jesus, who rifled a first-time finish past Franco Armani.

Argentina also looked threatening on the odd occasion they forayed into the final third. Lionel Messi floated a sumptuous free-kick into the box and Sergio Aguero was the quickest to react, but his header rebounded off the bar.

Messi wound back the clock with a dashing 50-meter run before laying off a deft pass to Aguero. However, the Manchester City player opted to shoot instead of passing sideways to an unmarked Lautaro Martinez and his effort was well blocked by Thiago Silva.


The Albiceleste picked up where they left off after halftime. Aguero just failed to make contact with a header after Nicolas Tagliafico’s cross from the left and Lautaro Martinez sent a feeble first-time effort straight at Alisson Becker in the Brazil goal.

Philippe Coutinho then fired over the bar from 10 yards when he had only the keeper to beat after being set up by Jesus.

The game suddenly opened up as both sides attacked frenetically into spaces that previously didn’t exit. Messi saw a shot cannon off the post after Martinez’s long-range effort was blocked, and the Barcelona forward followed up by sending the rebound across the face of the goal, narrowly missing the onrushing Aguero.

Messi’s influence grew as the game progressed. He was hacked down by his forma Blaugrana teammate Alves in another dangerous move on the edge of the box. The 32-year-old then drew gasps from the crowd when he curled the resultant free-kick over the wall, only to be denied by a fine save from Alisson.

However, Argentina’s spell of dominance was short-lived as Brazil landed a killer blow in the 71st minute. Jesus capitalized on a quick turnover by charging past Nicolas Otamendi and squaring a pass to Firmino, who netted with the easiest of tap-ins.

While the tournament has been plagued by video assistant referee (VAR), Ecuadoran referee Roddy Zambrano preferred to let the game run, which incensed Argentina when VAR did not come into play on several occasions.

“[The officials] were tired of making bulls— calls at this Copa and they didn’t go to VAR. It was unbelievable,” Messi said after the loss.

“It was like that all match. It was bulls— that they were doing it all match. There is no excuse — it must be looked into. Hopefully, CONMEBOL does something about these kind of referees.