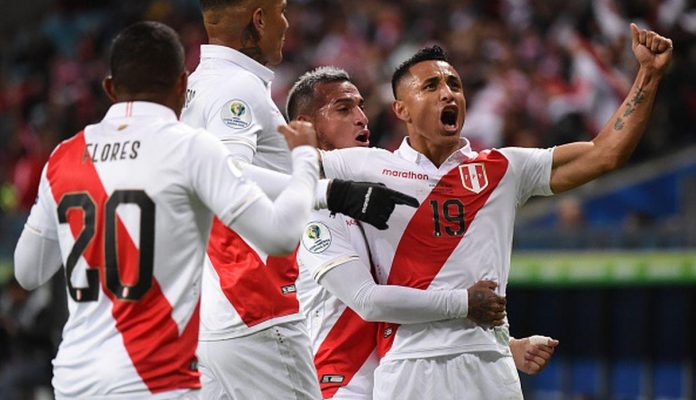 Peru notched up the convincing win thanks to goals from Edison Flores, Yoshimar Yotun and Paolo Guerrero, and their reward will be a rematch against host team Brazil in the final.

Peru were thrashed 5-0 by Brazil in their last group match, but they became a rejuvenated team after the humbling defeat, edging past Uruguay with a 5-4 penalty shoot-out win in the quarterfinals before sending Chile packing.

The stunning victory stopped Chile’s golden generation from challenging for a third straight title, following their triumphs over Argentina in 2015 and 2016 finals.

Peru took the lead in the 21st minute when Flores seized his chance inside the box and struck home. A goal by Yotun in the 38th minute made it 2-0 for the Peruvians. Veteran striker Guerrero then hit the third goal in injury time to wrap up the victory.

Peru will face Brazil in the final in Rio de Janeiro’s Maracana stadium on Sunday while Chile will play against Argentina for the third place in Sao Paulo on Saturday.

“We are a team that knows how to overcome adversities,” Peru coach Ricardo Gareca said.

“That’s something very unique to our team. That loss (against Brazil) would hurt any team, but we were able to recover from it. We deserve a lot of credit for that.”

Chile was trying to become the first team to win three straight Copa América titles since Argentina in the 1940s, but now will play the third-place match against the Argentines (again!) on Saturday.

The last time Peru graced a Copa America final was in 1975, which incidentally The Incas won with a 1-0 win over Colombia.