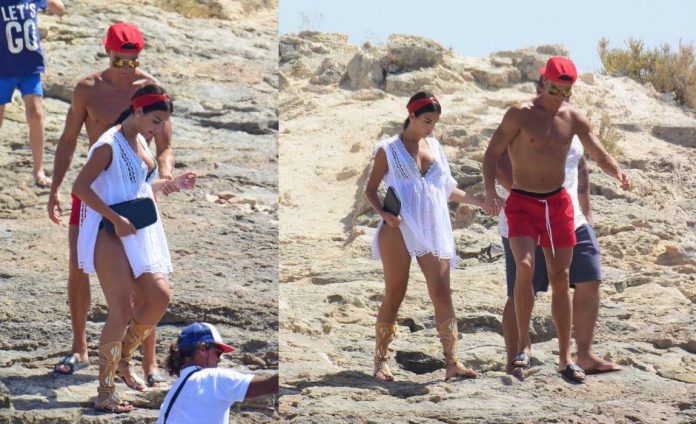 Cristiano Ronaldo carefully helps “pregnant” girlfriend Georgina Rodriguez over some rocks as she stuns in a bikini and gladiator-style sandals on holiday.

The Real Madrid star’s partner, 22, is said to be five months gone with the icon’s fourth child.

Ronaldo, wearing red shorts and a backwards red baseball cap, held onto Georgina’s hand as they navigated the rough terrain.

And he was careful not to let her out of his sight, with the former Prada shop assistant giving strong hints she is pregnant in recent photos in Ibiza showing her touching her stomach.

Earlier in the pair’s holiday, she was seen in a bikini with what looked like a sizeable stomach for her slender figure.

This time however she hid her midriff with a floaty white cover-up.

She did match her man’s look with a red, though, with a red headband.

Ronaldo, whose sandals had “Icon” written on them, had been out with Georgina to a restaurant in Formentera.

The couple were enjoying another beach day before the European Championship and Champions League-winning star returns to action with Madrid.

Ronaldo recently welcomed new twins into his family following a surrogate birth via a woman in the United States.

Dancer-turned-model Georgina, 23, is now said to have confirmed to Ronaldo’s family and friends she is expecting and the child is a girl due at the end of October.

A source close to the couple told a leading Portuguese newspaper: “They are very happy with the arrival of the baby.