Draw in the end! 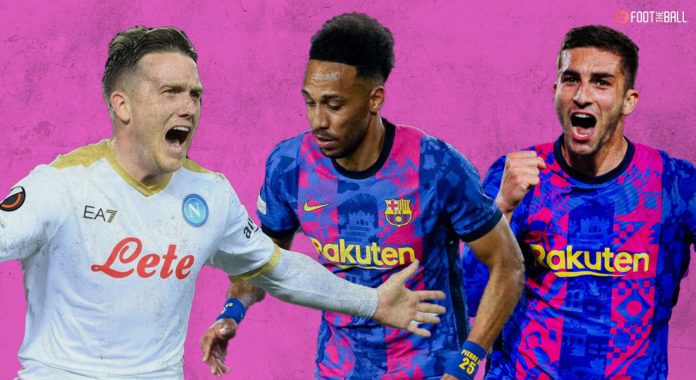 The Catalans played their first match in the Europa League for almost two decades as Napoli were the visitors as the knockouts get underway.

It was an even start to the game, with both teams moving back and forth with the ball. Nico Gonzalez had the first shot on target, testing Alex Meret from a tight angle on the right side. Next it was Victor Osimhen’s turn to do the same, albeit from the left side this time.

Which player will make the headlines? 📰#UEL pic.twitter.com/hhDdNkegt8

The best chance for each side fell within seconds of one another but only one team could capitalize. Pierre-Emerick Aubameyang held the ball up for the onrushing Ferran Torres who blazed over from the edge of the penalty box. Napoli marched right down the pitch from the goal kick with Piotr Zielinski setting Eljif Elmas free who faked a cross before laying the ball off for the Polish midifielder. His first low strike was well saved by Marc-Andre Ter Stegen before the rebound was blasted into the net to give the visitors the lead.

That was all the action in the first half as the home side trailed and in need of a big second half.

They started strongly, pressuring Napoli and dominating possession in the final third. Nico Gonzalez had a low shot well held by Meret but there were a few half-chances amidst them all. The away side were struggling to break free and have any meaningful hold of the ball. The pressure eventually paid off with Adama Traore’s cross brushing the fingers of Juan Jesus which was initially not given as a penalty. However, after a VAR review, the decision was changed and Torres dispatched the spot kick coolly to equalize.

As the minutes ticked down, Barcelona were looking more and more dangerous. Some beautiful footwork from Ousmane Dembele set up a glorious chance for Torres who shot wide in an attempt to curl the ball into the top corner. That was followed by the Frenchman delivering a dangerous low cross that evaded everyone but Meret who pushed it just wide of the onrushing attackers. There was to no late heroics as it ended 1-1.

There is no doubt that Luciano Spalletti’s side struggled on the night but that was due to a lack of cohesive planning which left Osimhen with no support. They were not able to match the intensity and energy of Barcelona in the opening exchanges but took the lead just before the half hour mark. Since then, Napoli were able to see out the first half well but their attacking prowess vanished in the second half. The backline was being overworked and having to make a lot of important clearances. However, the penalty decision could be deemed as very harsh given the moment of play and how little Jesus could have done to move his hand away. Nevertheless, they were able to avoid defeat and head into the second leg at home with a real chance of progressing.

Xavi had prepared his side well and the club’s newly assembled frontline was the most impressive. Traore was a danger anytime he got on the ball while Torres was getting a lot of touches in dangerous areas. They were unlucky to go behind but started very positively after the break to score.

Ferran Torres has either scored or assisted in four of his last five games for Barcelona:

⚽️ vs Athletic Bilbao
🅰️ vs Deportivo
🅰️ vs Atlético
❌ vs Espanyol
⚽️ vs Napoli

He wasn’t missing that one. 😅#UEL pic.twitter.com/Apbr8pfBcD

The penalty decision will be debated for some time but Torres’ clinical finish underlined their dominance of the game. The defence hardly had any work in the final minutes of the match as Napoli were camped in their own half but only the draw was the result of the night.

All to play for next week

The action moves back to Italy and the Diego Maradone Stadium where Napoli will start as the slight favourites. However, the Blaugrana are looking like a different proposition now and will fancy their own chances of making it to the next round.