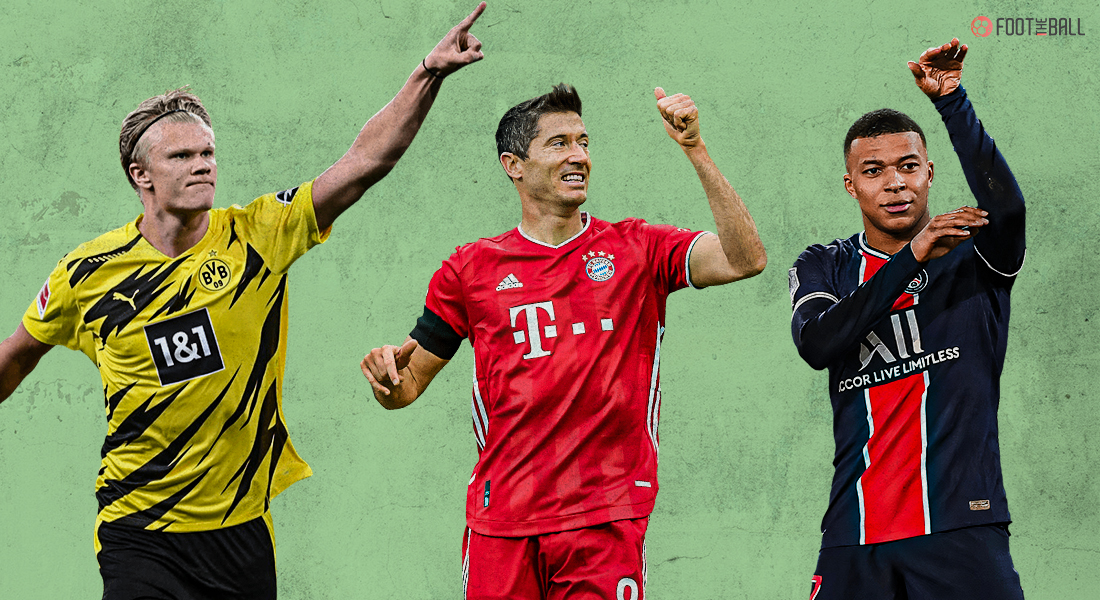 The 2020-21 season is officially over in terms of league matches across Europe. Once again, it has been an octane series of matches and goals with the notable addition of no fans. That however has not stopped the superstar strikers on the pitch from getting their names on the scoresheet. In fact, records were broken and set in this true one-of-a-kind season where the old veterans battled it out with the young guns. FootTheBall takes a look at the top seven leading marksmen from the continent.

“Big Rom” was really in the mood this season. Often chided for being overweight or having a poor touch, the Belgian really hit his heights ever since moving to Inter. This season was just the cherry on top.

2020/21 was the season Romelu Lukaku proved he is one of the most complete centre-forwards in the world.

Not only did he win the Scudetto, but Lukaku also finished second in the list of Serie A goalscorers, bettering his previous season’s tally by one goal. Furthermore, he also racked up 11 assists (second highest in the league) with his direct running and strength causing havoc for oppositions all season long.

Hard to believe the Norweigan is still only 20-years-old. Having already shown his ruthlessness in front of goal with 13 goals in 15 matches last season, Haaland just turned the pace way up.

Erling Haaland for BVB this season:

First U-21 player from Europe's top 5 leagues to score 40 goals in all competitions since Ronaldo Fenomeno (96/97 – 46 goals). pic.twitter.com/txNfJs42zm

Bear in mind that this season’s return came in just 28 matches, which makes him averaging a goal every 89 minutes. Across all competitions, he breached the 40 goals mark for the first time in his career. He also set up six goals for his teammates and led the team to the DFB-Pokal Cup victory, all of which has really cemented his place among the most feared strikers at present.

Speaking of generational talents, Mbappe once again did what Mbappe does. The French sensation tore up the finishing a full seven goals clear of his nearest challenger. His average of 88 minutes per goal is one of the best across Europe, let alone France. He was also awarded the ‘Best Player’ in Ligue 1 for his exploits this season.

Not to mention the seven assists as well. Even though PSG lost out on the Ligue 1 title, Mbappe led them to the Coupe de France trophy in a fine style. With the European Championships coming up, expect the 22-year-old to dazzle everyone around the world once more with his electric pace and finishing.

The most surprising addition to the list by far. The Portuguese attacker has been a revelation for the Bundesliga club ever since he joined in 2019. This season was the most fruitful season of his career by far and was instrumental as his team qualified for the Europa League. He also became the club’s top goalscorer in a single season ever.

After underwhelming spells at AC Milan and Sevilla, the 25-year-old has really found his spark in Germany the past two years. Having now been called up to the national squad for the European Championships this summer, Silva will be keen to link up with the third name on our list as Portugal looks to defend its crown.

It has been a strange season for the iconic player. Dogged by transfer speculation and even dropped for the Old Lady’s final match, Ronaldo still managed to do what he does best. He ended his season as Serie A top scorer, becoming the first player to earn that distinction in three different countries.

Cristiano Ronaldo etches his name in the history books once again!

The 36-year-old is still performing at the top of his game and helped his side win the Coppa Italia in what has otherwise been an underwhelming season for the giants of Italy. With the chance to win back-to-back European titles, no doubt this season will act as a catalyst for Portugal’s all-time leading marksman to keep his streak going.

Barcelona have had a disaster of a season by their standards, except for one man. Putting aside his differences with the club that almost saw him leave in the summer, the Argentine superstar almost led the Blaugrana to the league title. With precious little help from others (Antoine Griezmann was the next highest scorer with 13), Messi’s goals along with his nine assists ultimately fell short in their pursuit.

On the European Boot front, he once again had to settle for the silver but with World Cup qualifiers and Copa America coming up, Messi has more reasons to be optimistic about his international sojourn. His future with Barcelona is much less certain however with the 33-year-old’s contract set to expire in June.

Finishing a full 11 goals clear of a five-time Balon D’Or winner is no joke. Lewandowski has just been on a different level this season, which has not surprised many. The Polish captain played only 29 matches which means he averaged a goal every 60 minutes. He had scored five hat-tricks, and also racked up seven assists.

The biggest honour however has to be him breaking Gerd Muller’s 40 goals record in Bundesliga in the last match of the season. This was the first Golden Boot for the 32-year-old and he remains imperious in front of goal. All of which bodes well for a Poland squad looking to make a big splash in this summer’s European Championships.