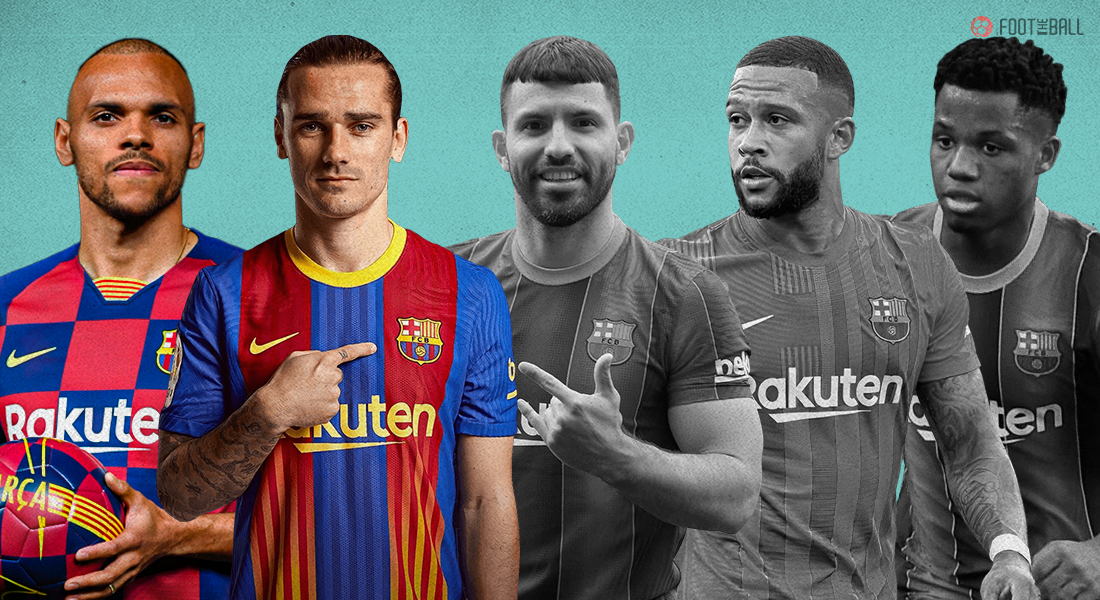 FC Barcelona is literally in a state of pandemonium as things currently stand given its unique set of woes. The Catalan club is deep in debt and is expecting whopping losses for the past season to the tune of almost €500 million. But, the trouble doesn’t end here for the Spanish club.

Even though they have signed players such as Sergio Aguero, Memphis Depay, Eric Garcia and Emerson Royal, they cannot register them owing to the harsh and almost draconian financial fair play regulations in Spain.

With Ousmane Dembele injured and the duo of Ansu Fati and Philippe Coutinho having not played a competitive game since the end of last year, Barcelona face an apparent dearth in terms of attacking options up front apparently.

With the La Liga season just around the corner, FootTheBall analyses the precarious situation that the Catalan club risks facing in the nascent stages of the season.

BARCELONA TO BE TOOTHLESS IN ATTACK AS NEW SEASON APPROACHES?

Even though attacking reinforcements in the form of Memphis Depay and Sergio Aguero have been signed by Barcelona, both of them are restricted from playing in La Liga given the strict financial controls in place.

The Spanish club first needs an inflow of €200 million before they can register any of the above-mentioned players. Therefore, as of now even though both of them have ‘signed’ for Barcelona, they cannot play for the club in competitive matches.

All in all, Barcelona have seven players who can play in attack for the team, namely Sergio Aguero, Memphis Depay, Ansu Fati, Philippe Coutinho, Ousmane Dembele, Antoine Griezmann and Martin Braithwaite.

But owing to injury woes and registration concerns as of now only Antoine Griezmann and Martin Braithwaite can be expected to start in attack for Barcelona against Real Sociedad this Sunday.

Ansu Fati and Philippe Coutinho have not played since the turn of the year and will not be expected to straightaway slot into the starting lineup for Barcelona.

On the other hand, Dembele is expected to remain on the sidelines after sustaining an injury while on international duty with France at Euro 2020.

Same is the case with Sergio Aguero who will be out for a minimum of ten weeks after sustaining an injury in training, meanwhile Memphis Depay cannot play due to not being registered for Barcelona.

MIDFIELD ONE OF THE SAVING GRACES FOR THE CATALANS

Midfield is one area where the Catalans can be expected to have sufficient personnel fit and eligible to play in La Liga. New club captain Sergio Busquets is expected to anchor the midfield alongside Dutch midfielder Frenkie de Jong and young starlet Pedri.

It is expected that Pedri will understandably be given some time off to recover from a gruelling and exhausting run of fixtures that he played over the course of last season and this summer’s Euro 2020 and Summer Olympic Games in Tokyo.

Riqui Puig can deputise for Pedri meanwhile in the middle of the park for the Catalans so there is obviously no scare for the club when it comes to its midfield options.

In the 2020-21 season, Barcelona conceded 38 goals in 38 games as they finished third in the league and understandably they needed reinforcements in defence.

To this effect, they signed Eric Garcia and Emerson Royal for bolstering the department that needed to be addressed the most.

But, once again due to a combination of bizarre circumstances, Barcelona aren’t able to register both the defenders ahead of the crucial opening fixture against Real Sociedad.

Therefore, the only defenders currently eligible to play include Gerard Pique,  Samuel Umtiti, Sergino Dest, Sergi Roberto, Ronald Araujo and Jordi Alba. (the majority of them were susceptible to poor defending last season)

As of now, Oscar Mingueza and Clement Lenglet are nursing injuries – something that further complicates matters for Ronald Koeman ahead of the La Liga opener at home to Real Sociedad.

Therefore, it will be interesting to see how Ronald Koeman decides the starting lineup for the Blaugrana this season given the unique problems/ woes that are plaguing Barcelona this term.