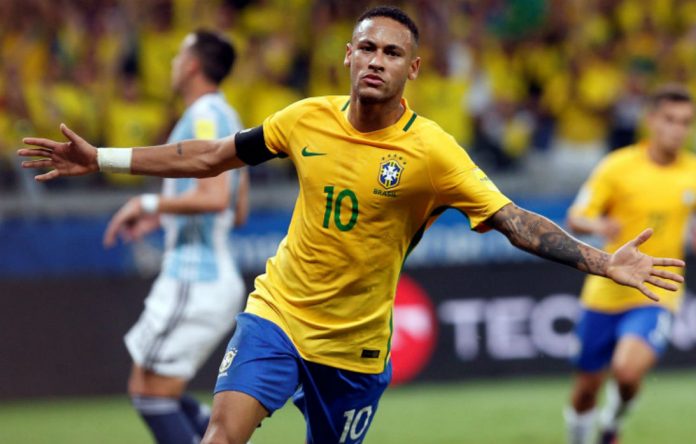 Danilo and Fagner were selected to replace injured right-back Dani Alves as Brazil coach Tite announced his 23-man squad for the FIFA World Cup in Russia.

As expected, forward Neymar was included as he completes the final stage of his recovery from a foot injury, while Shakhtar Donetsk pair Fred and Taison were among few surprises.

“We are observing him closely,” Lasmar told a press conference in Rio de Janeiro. “He will start training progressively. He can now begin training with the ball and we expect him to participate in our [pre-World Cup] friendlies.”

Manchester City’s Danilo, who didn’t play a single minute in Brazil’s 18-match World Cup qualifying campaign, and Fagner, who is recovering from a thigh injury, were chosen ahead of Bayern Munich’s Rafinha for the right-back role.

“Dani is a great player and leader and we are going to miss him, but we have other options,” Tite said.

The 56-year-old manager admitted that some of the players chosen – such as Fagner and Taison – were favored by having played under him at club level.

“I think it had an impact but I also know how to evaluate other points – whether they are technical, physical, emotional or tactical – to make a fair judgement,” he said. “And sometimes it goes beyond numbers, it has to do with feeling…”

Brazil will begin their World Cup campaign against Switzerland on June 17 and will also meet Costa Rica and Serbia in the group stage.

The Selecao will prepare for the tournament with friendlies against Croatia and Austria on June 3 and 10, respectively.

Tite accepted that his team would be among the frontrunners to win football’s flagship event for a sixth time.

“Brazil are one of the favorites because of the football we have played, our consistency, our aggressiveness, our goals and our quick transitional play,” he said.

The former Corinthians boss revealed he is yet to decide who will start in central defence, with one of Thiago Silva, Miranda and Marquinhos expected to be relegated to the bench.

Likewise, Brazil’s coaching staff is mulling over whether to use Barcelona’s Philippe Coutinho on the left or in a central midfield role.

One certainty is that Manchester City’s Gabriel Jesus will begin the tournament as the team’s central striker ahead of Liverpool’s Roberto Firmino.

“At first, Gabriel Jesus is our starter. But Roberto Firmino will fight for that position in top form,” Tite said. “The challenge is open on the right back, but Danilo has some advantage now because he has performed well recently,” Tite said.