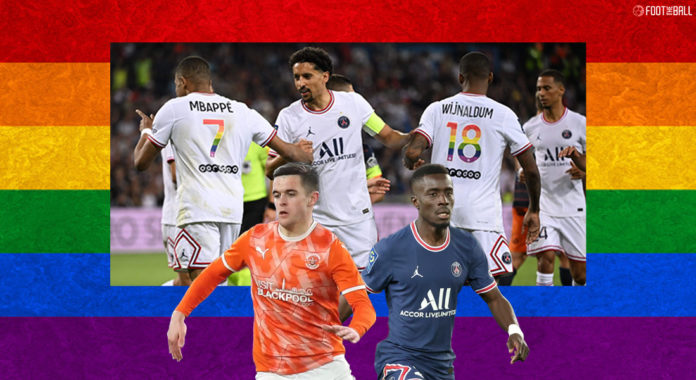 The major part of the footballing world in Europe and England is lauding the actions of Jake Daniels over the past few days. The Blackpool youngster became the first professional player since the days of Justin Fashanu to come out as gay publicly. The footballing world praised his “brave” actions in the lead-up to the International Day Against Homophobia, Biphobia, and Transphobia on Tuesday.

Also read: The players before Jake Daniels who have dared to be true

However, there has been one story on the opposite path. PSG midfielder Idrissa Gana Gueye missed his side’s fixture against Montpellier at the weekend. It has been widely reported that the Senegalese refused to don the rainbow-themed kits and laces of the match.

Twitter has been flooded with the hashtag #WeareallIdrissa in support of Gueye. This is certainly a sensitive discussion, one that sees various arguments put forward.

They sing about democracy, respect for opinion, other opinion and freedom of expression, and when the hero Idrissa gaye rejected their false beliefs, they launched a media campaign against him!

The LGBTQ community screams for respect and equality but they don't allow people who have contradictory views and beliefs from their to be. What a world of politics!!

Much respect King Idrissa ♥️
We Are With You

Not to go into Idrissa Gueye’s personal life, it has been known that he is a deeply religious human. Islam does not condone homosexuality or LGBTQ+ rights. All the nations in the Middle East have strict laws punishing them.

Therefore, it is not a total surprise to see Gueye following his religion. It is for the same reason why there have been genuine concerns over holding the FIFA World Cup in Qatar.

🏳️‍🌈 "As the @theworldcup2022 approaches, @GiveOut_Org is calling on our community and allies to show their support for queer communities in the Middle East and North Africa region around this major sporting event," writes @RupertBAbbott. #IDAHOBIT2022

LGBTQ+ individuals are afraid there might be persecution if they show their true feelings in public. Several hotels have already refused LGBT+ couples from staying there. There has been a great outpouring of support for Gueye’s actions, and some of the tweets are true of a disgusting mentality.

However, the most fundamental argument underpinning all of them has been that football and LGBT+ discussion should be kept separate. That football has no place for all of this.

Official #FIFA approved #WorldCup hotels in #Qatar are REFUSING to admit LGBT+ guests or telling same-sex couples to modify their behaviour & not 'dress gay'. One admitted gay guests had been arrested by the police https://t.co/S3IH2twrkW @Brian_Whit @RiyadhKhalaf @monaeltahawy

This is certainly trivializing the game of football into only a spectacle, and not as a driver of change and upliftment. Therefore, the whole reaction following Gueye’s action cannot be seen in isolation, especially given the positive news just across the English Channel.

For a 17-year-old to come out as gay while playing for one of the most storied clubs in the English football pyramid takes courage. Loads of it. That is exactly what Jake Daniels did with his announcement on the club’s website. Daniels made it clear that he did not want to keep “lying” till retirement.

"When I saw him talking, I couldn't believe that he's 17 years old. I don't know him, but I'm really proud of him."

Liverpool manager Jurgen Klopp praises Jake Daniels for his bravery after he became the first active professional player to come out publicly as gay since 1990. pic.twitter.com/l4uWrDjTZ5

Moreover, Daniels cited Tom Daley and Josh Cavallo as inspirations to reveal the truth so early on in his career. It is a cause for celebration, but one cannot escape real-world circumstances. LGBTQ+ footballers have been few and far in-between forever. Megan Rapinoe, one of the foremost names in women’s football, has been a beacon of hope for the whole community.

The agreements, which run through 2028, contain:

The USA women’s team became the first to win a historic lawsuit that mandated equal pay for both men’s and women’s teams. While that should be the norm in an ideal world, it is far from the truth.

What of the future?

The above argument is not to say that Idrissa Gueye is all bad. He has been one of the most giving footballers, setting up schools and hospitals in Senegal, alongside raising money for medical research. He may just be following his religion in terms of not supporting the LGBTQ+ movement.

PSG’s Idrissa Gana Gueye is aiming to raise €2million at a charity dinner tonight via his For Hope Association to fund HIV/AIDS and cancer care for children in Africa. This follows on from providing electricity and water to remote villages in Senegal. pic.twitter.com/L5TF0aqmYq

There is still a chance of educating him and all the others like him who see LGBT rights and people as “unnatural.” Something “evil.” Daniels, and Fashanu before him, have shown us the way why this is normal.

Hopefully, many more footballers are inspired in the past few days and choose to embrace their true identities. Therefore, the hope remains strong for the future.