On Wednesday it was reported that Juve had rejected an offer of around £87 million, but the latest development see’s the Italian giants accepting an offer in the range of €120 million.

Whether Pogba comes off or not, United have a clear vision this summer market. Last three summers a clown show in comparison.

FootTheBall sources in Italy suggest that the player has asked to leave for the first time and the club have respected his decision by accepting his wish.

If the deal goes through it will make Pogba the most expensive player in the world, a tag currently boasted by Real Madrid’s Gareth Bale, who cost the Galactico’s £85 million. 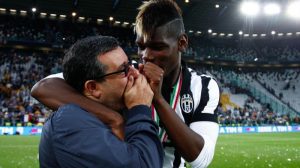 Both Pogba and his agent Mino Raiola will be due a 20 percent bonus of any transfer fee, after they managed to convince Juventus to add the clause of in the players contract.

Pogba joined Juventus in 2012 on a “FREE TRANSFER” from United, due to a lack of playing time, and has since made a huge name for himself.

On being asked if he’d fancy a move back to Old Trafford the 23-year old smiled and said “I don’t know. We’ll see, we’ll see. For the moment I’m at Juve and I’m happy. I don’t know where I want to go.”