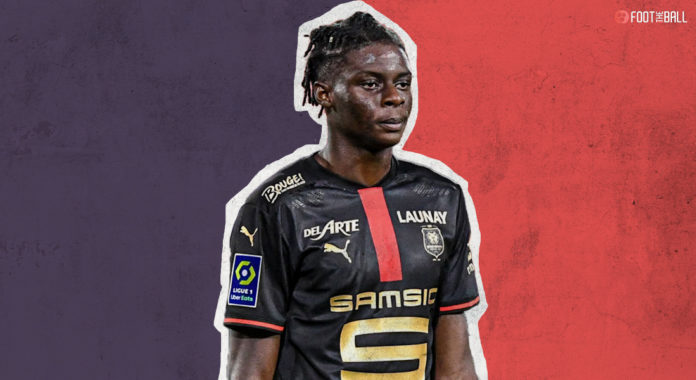 Ligue 1 is fast becoming the premier league for young talents to shine. French clubs have been giving chances to players coming through their academies on a regular basis. One of the leaders in this revolution has been Stade Rennes.

They have world-class youth facilities that produce generational talents every year. Eduardo Camavinga, Kamaldeen Sulemana, Lovro Majer, and Jeremy Doku are some of the most popular names. The latest name to join this list has been Lesley Chimuanya Ugochukwu.

Rennes' Lesley Ugochukwu made his first Ligue 1 start vs #PSG on Sunday.

He's 17 and of Nigerian-French descent.

Gave an accomplished display, including this bodying of Neymar. pic.twitter.com/sLSmxodV20

The 17-year-old is from the class of 2004, with other youngsters like Gavi and Alejandro Garnacho. Ugochukwu has already become a regular in the senior setup for Rennes over the past year. Furthermore, he has also represented France at the U18 level, though can also represent Nigeria.

Who is Lesley Ugochukwu?

Ugochukwu was born in Rennes and joined the famed Rouge et Noir academy at just eight-years-old. He is the nephew of former Nice and Nigeria player Onyekachi Apam. Ugochukwu started his footballing journey as a defender alongside Camavinga in the Rennes youth teams.

However, like his slightly older former teammate, Ugochukwu made the switch to centre midfield.

Lesley Ugochukwu made his debut for Rennes on April 25 at 17 years & 30 days old against Dijon. Today, he makes his full debut, starting in midfield against Paris Saint-Germain.

Born in France to Nigerian parents, he could be another dual-national option for Gernot Rohr. pic.twitter.com/0BC6aICJno

He made his professional debut in April 2021 against Dijon, going onto appear a further two times. Ugochukwu has been a common face off the bench in 2021-22 as evidenced by just three starts from 12 appearances. He scored his first senior goal in late December in a 5-0 mauling of Saint-Etienne.

Furthermore, Ugochukwu has also featured three times in the Europa Conference League. Rennes have always been at the forefront of giving youngsters chances and it is no surprise to him Ugochukwu shining.

The potential of Lesley Ugochukwu

Having transitioned into the senior team at such a young age, Ugochukwu is set to become a key player. Rennes have been using a 4-3-3 for almost all of their matches this season.

Though Ugochukwu has not started often, his role has been been to screen the backline and provide defensive cover. Moreover, Ugochukwu has been likened to France legend Marcel Desailly.

Lesley Ugochukwu has been compared to Marcel Desailly and dubbed 'the new Camavinga' ahead of signing this contract extension.

If Camavinga does leave Rennes, expect the 17-year-old to help fill his shoes after impressing in his first Ligue 1 appearances late last season.#NXGN https://t.co/bKguDLIqUE

That kind of praise from his coaches is not without merit. Ugochukwu has a long way to go in order to become a first-team starter but the work has begun. Rennes will give the 17-year-old every chance to shine as game time slowly increases. Ugochukwu can develop into a bonafide star if he ends up staying at the club.

However, there is no doubt that European clubs will definitely be looking ta Ugochukwu as a viable option soon.

As mentioned above, Ugochukwu has scored only once so far in 2021-22. That was a smart, neat finish from the centre of the penalty box. Given how Ugochukwu tends to play in a defensive position, it is unlikely that he will score often. However, he has shown signs of great promise in his primary role.

Ugochukwu has completed both of his dribbles attempted along with putting in six successful tackles from nine attempted. Ugochukwu’s first professional start came against PSG last year where he earned high plaudits. The youngster held his own against the likes of Neymar and others, limiting the impact of the Parisians.

Unfortunately, he suffered an ankle sprain in January and was out injured for almost two months. Now that he is back, Rennes will likely ease him into the first-team picture with the season’s end coming up.

There are a few things that immediately stand out when observing Lesley Ugochukwu. One of the most striking amongst them is his physicality. Ugochuwku can impose himself in a dominant manner on matches, and is very hard to shrug off the ball. Ugochukwu is not afraid to go in hard for tackles either.

He has the vision to make line-breaking passes and gets forward when the chance arises. Ugochukwu likes to arrive late in the box in order to receive the cutbacks or pick up rebounds. However, what can be characterized as most impressive apart from his technical skills is his determination.

Whether its fighting for loose balls or wanting to win it back, Ugochuwku never backs down. He will go toe-to-toe with the game’s best players and stand his ground.

There are several clubs that can really do with a player like Ugochukwu. Manchester United are in dire need of a defensive midfielder with legs. Ugochukwu fits the bill given how on the ball he wants to be and always looks to keep the play moving.

Furthermore, his young age will help in molding his gameplay further under the new incoming manager, whoever it may be.

Though he may have to settle for a place on the bench in the initial months, Ugochukwo has shown enough promise to dislodge the incumbents. Rennes will certainly be hoping to keep a hold of their player and develop him further in order to sell at a higher price.