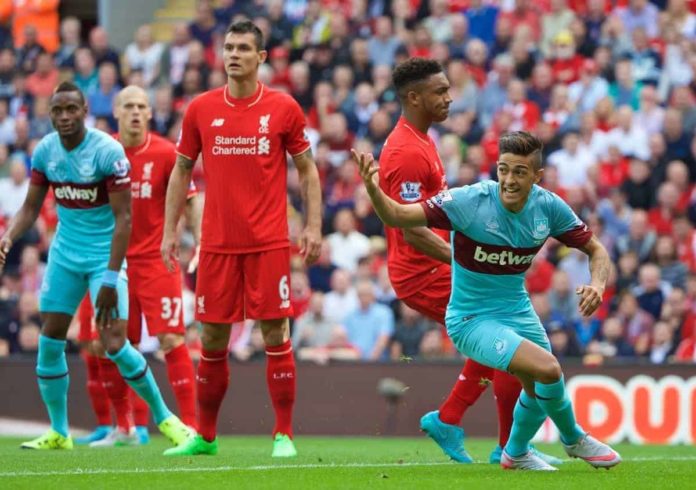 Liverpool have never lost a Premier League match against West Ham at Anfield and will be in confident mood ahead of Saturday’s match.

The Reds (2-1-0) have started well with back-to-back 1-0 wins against Stoke City and Bournemouth followed by a goalless draw at Arsenal last Monday. Liverpool could easily have won at the Emirates had it not been for the heroics of Gunners goalkeeper Petr Cech, who made superb saves to deny Christian Benteke and Philippe Coutinho. Brazilian midfielder Coutinho also struck the crossbar early in the game.

“We definitely could have had all three points,” Liverpool manager Brendan Rodgers told his club’s official website. “Certainly performance-wise, I was very happy with how we worked. The first half in particular we created chances and should have been in front.

“Second half, you expect some pressure in the game, but we defended that very well and always looked a threat going forward. Our performance level is growing all the time, you see our defensive organisation was very good against a top-class team. The overriding feeling is we get a point, a clean sheet and we move to the next game.”

The Hammers (1-0-2) made a flying start under new manager Slaven Bilic with an emphatic 2-0 win at Arsenal on the opening weekend, but have since suffered two straight home defeats – 2-1 against Leicester City and 4-3 against promoted Bournemouth.

“For me, the win against Arsenal was just that,” Bilic told his club’s official website. “I said after the game we need to refocus immediately. I don’t like the position we’re in. We’re not going to panic, it’s not time to panic, it’s still early days.

“We have the quality; we have aspects of our game that are good. We showed that against Arsenal, we need to rediscover that. The first halves against Leicester and Bournemouth were just not good enough. We need to find that brotherhood if you like and have to react quickly. We have a tough game next week away at Liverpool, it’s an opportunity, the pressure will be off us.”

Liverpool will check the fitness of Adam Lallana and Jordan Henderson, while Daniel Sturridge, Jon Flanagan and Joe Allen are all sidelined.

West Ham will be without suspended duo Adrian and Carl Jenkinson.

The Hammers will also no longer be able to call upon the services of Kevin Nolan, who has left the club this week by mutual consent after four years at Upton Park. The 33-year-old midfielder, who played 157 games and scored 31 goals for West Ham after signing from Newcastle United in June 2011, left the club because he could not be promised regular football, according to Hammers boss Bilic.

The Reds are 14-5-0 at home versus West Ham in Premier League play, outscoring Hammers 39-5 in those matches. Liverpool have won 23 of the 38 overall league matches between the teams, with West Ham claiming seven and the teams sharing points eight times.

Both teams took maximum points from their home game last season, with West Ham winning 3-1 at Upton Park in September. Winston Reid and Diafra Sakho put the Hammers 2-0 up after seven minutes, but Raheem Sterling pulled one back on 26 minutes. Morgan Amalfitano finally made the points safe in the 88th minute.

Liverpool won 2-0 at Anfield in late January as Coutinho assisted on second-half goals by Sterling and Sturridge.