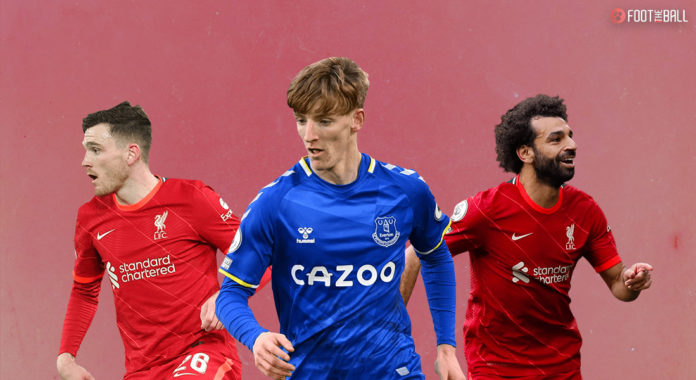 The Merseyside Derby always promises excitement, though the two sides are heading in opposite directions.

It was a sedate start from both sides. Everton were trying to keep hold of the ball from Liverpool who were dominating possession. There were a few niggly fouls going on here and there. Anthony Gordon was booked for simulation in the only notable incident.

23' An even opening at Anfield. Blues defending well and getting numbers forward. No real chance for either side yet.

Liverpool were being patient in their buildup, waiting for the moment to come. Everton were defending in a low block, thwarting every opposing foray. The away side were using extreme time-wasting tactics to disrupt the momentum. The home fans inside the stadium were belting out their frustrations. Tempers flared towards the end of the first half as the game descended into chaos. However, the score remained 0-0.

The Toffees were gaining more of a foothold in the match after the break. Gordon went close with a half chance. He was looking like Everton’s best outlet to attack. However, Liverpool’s relentless pressure finally told just after the hour mark. Divock Origi and Mo Salah linked up inside the box with the Egyptian dinking a cross towards the back post. It was met by the incoming Andy Robertson who nodded his side into the lead.

62' – Salah crosses the ball towards the back-post, the ball is met by @andrewrobertso5 who heads in 😍

Liverpool got their second and there was only one scorer. An overhead attempt from Luis Diaz broke kindly for Origi who headed home the second. Everton could not mount a comeback as Liverpool picked up another win. Everton are now deep in trouble. It was not the best of watches but the job was done by Liverpool. Origi the hero once again as Everton could only muster one shot on target.

It was not easy and it was not pretty. Liverpool were made to work and really dig et the win. The attack was far from fluid as supporteras s had been accustomed to. Everton were frustrating them at every opportunity. Liverpool just could not get a rhythm going for long enough. Jurgen Klopp was ashen-faced on the sidelines with the stadium getting agitated. Moreover, a draw would have done them no favours.

14 straight matches unbeaten in the Premier League for Liverpool 👊

Therefore, it was a big relief when Robertson opened the scoring. Their defence was not troubled much with Origi putting the icing on a needed win. It was a tough afternoon but they would be glad at being on the right side of things. The gap to City stays the same.

It was good till it lasted. Everton were setup to not let Liverpool settle. That worked to a tee in the first half. Fouls, break ups in play, players wasting time, it was all on show. Moreover, they did have Gordon to trouble the defence. However, the quality as a whole was simply not enough. The quality of Liverpool was just too good which was not being countered enough. The defence held firm but was eventually broken. Frank Lamapard’s side could not break down a compact defence. The absence of Dominic Calvert-Lewin also hurt their chances. Once the first goal went in, it was clear where the match was heading. Origi inflicting pain never ends and Everton are in trouble.

Impact on both ends

Liverpool stay right on the heels of Manchester City. Meanwhile, Everton are in the relegation zone after Burnley’s win. They trail the Clarets by two points, having played a game less. Frank Lampard really needs to pull something out of his bag in order to save a calamitous season. Everton have never been relegated from the English top-flight and it will really be a story if they do.