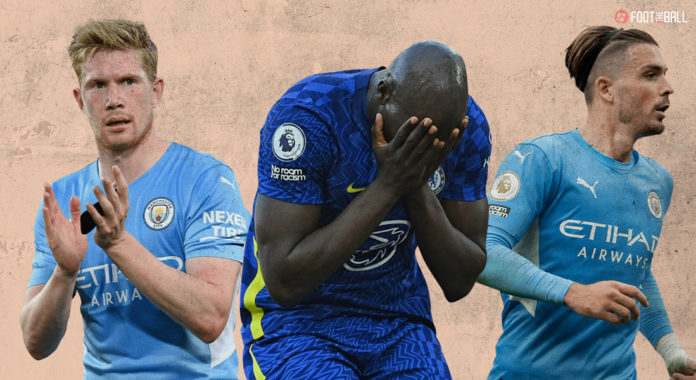 The defending champions hosted the champions of Europe in a pivotal clash for the summit of the Premier League. Chelsea knew a win is the only option to stop Manchester City cantering to the title already.

It was an even contest over the first 15 minutes as both teams cancelled each other. City saw John Stones head directly at Kepa from a corner. On the other side, Romelu Lukaku and Hakim Ziyech were linking up well but posed no real danger.

City were dominating possession, forcing Chelsea to sit back and defend. Thomas Tuchel was visibly frustrated at the way things were going. The home side thought they had the lead as Jack Grealish aimed to profit from a Blues error. His shot from the edge of the penalty box took a slight deflection of the onrushing Kepa’s left leg to drop just wide.

That ended up being the only real chance of the first half. Chelsea were yet to register a shot of any kind and surely changes would have to be made sooner than later. Pep Guardiola knew a similar kind of performance after the break would surely net them something.

Surprisingly, it was the visitors with their first shot on target within two minutes. Mateo Kovacic set Lukaku through on goal whose first time strike was firmly pushed away by Ederson who had come out to close the angle.

60. The game has opened up a bit more in recent minutes with a few dangerous balls flashing across the Chelsea penalty area and Chelsea themselves trying to hit us on the break in return! ⚔️

Kevin De Bruyne had a free-kick punched away by Kepa as the game crossed the hour mark. And it was the Belgian who broke the deadlock with a piece of individual brilliance. His brilliant run from midfield, avoiding the challenge of N’Golo Kante before curling a sumptuous shot past the despairing dive of Kepa. Chelsea now had little choice but to throw the kitchen sink in order to avoid a costly defeat.

71. Against his former club! 💥@DeBruyneKev turns and drives at goal with passing options to his left and right, those options quickly closed off and he was left with no choice but to shoot – and boy did he shoot! 🎯

Neither side looked to in to score again, though Grealish did test Kepa at his near post. That was that when it came to chances in the match as the home side kept up their winning streak.

Not the most clinical of displays from Guardiola’s side but just like the reverse fixture, one goal proved to be the difference. To be fair, City were always looking the more likely to score given the amount of ball they were seeing in the opening 69 minutes. The absence of Gabriel Jesus may have blunted their finishing a bit with Grealish wasting the best chance either side have had up to that point.

He's not scored against any side more 😏 pic.twitter.com/l0GdS5xnry

Nevertheless, Phil Foden and De Bruyne were always looking dangerous in and around the Chelsea box. The defence remained solid, with the Blues labouring to have shots on target throughout the match.

Tuchel’s body language told the story from the sidelines as he was rarely seated or calm. The lineup was strange to begin with, with no Mason Mount, Kai Havertz or Timo Werner. The German striker had linked up especially well with Lukaku against Spurs but was surprisingly left out. Lukaku for his part was struggling to get forward touches for much of the game and his lone shot was the best chance for the away side. Ziyech and Christain Pulisic offered little with Marcos Alonso’s poor showing highlighting the glaring need for the Blues to sign a replacement for Ben Chilwell soon.

13 points clear at the top and looking imperious as the weeks go by. It is hard to see any side catching up to City, though Liverpool have two games in hand to cut the deficit at least. Meanwhile, Chelsea are in real danger of losing their second spot after another tepid showing in recent weeks and something needs to change in terms of their league performances if they are to stay relevant in the title race.