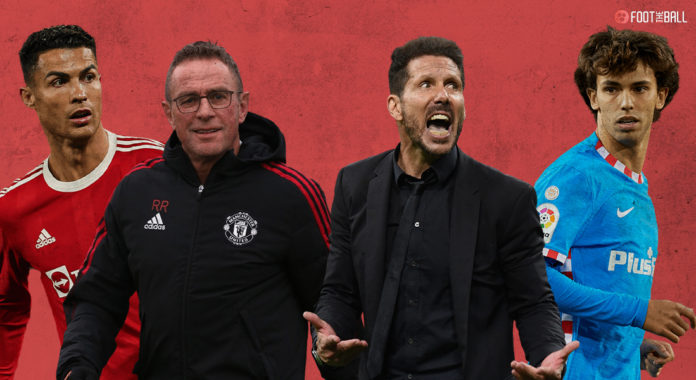 A pivotal second-leg at the Theatre of Dreams under lights with progression on the line? Yes, please! Manchester United, fresh of beating Spurs, host Atletico Madrid with the score poised at 1-1.

The Red Devils have a lot of things to be grateful for recently. Cristiano Ronaldo bagging a hat-trick to go past Josef Bican’s goals record. Jadon Sancho showing consistency. Fred playing like he is actually from Brazil. All of it was too hot to handle for Spurs as Old Trafford. The attention is now squarely on beating the Spaniards at home.

🌅 A huge few days on the horizon — let's stick together ✊🔴#MUFC | #MondayMotivation pic.twitter.com/pgcTDSzCl4

Ralf Rangnick knows that he cannot be complacent. Atletico were the better team for large parts of the first-leg. United have never been too eager to hold onto possession but they have to be more solid defensively. Harry Maguire really has to step up as defensive leader to ensure the backline remains solid.

In contrast, Atletico have had a perfect record since the draw at home. Diego Simone’s men have won all three of their matches by 7-2 in total. That strong run of form has catapulted Los Rojiblancos back into contention for the fourth spot. They are level on points with Barcelona, having played a game more. Atletico will feel they should have scored a second goal in the first-leg but it was not to be.

Even the manner in which they conceded was avoidable, with Reinaldo at fault. Nevertheless, they will be very confident of their chances of beating United given how porous the host’s defence is. Simeone drills his team well to out battle opponents and United could be in for a heavy night.

Edinson Cavani played his first minutes in a long time against Spurs. He will be back on the bench but Bruno Fernandes’ participation is in doubt with covid. Luke Shaw should also be fit for the subs.

Atletico have a whole host of injuries. Sime Vrsaljko, Mateus Cunha and Daniel Wass are out. Jose Maria Gimenez and Thomas Lemar are in a race against time to get fit.

The scourge of Atletico has risen at the worst possible time for the visitors. Ronaldo was quiet in the first-leg and missed the Manchester Derby. However, he return to form in spectacular fashion at the weekend. Three goals and each of them highlighting a key aspect of his game. A long range belter, a close range tap-in and a bullet header. Ronaldo has 18 goals already this season in league and Europe.

No doubt United will be heavily relying on him to replicate the same form. Sancho can be expected to find Ronaldo at every opportunity while the others look to feed him outside. Ronaldo can be a menace to guard from set-pieces as well, and his towering leap outfoxes defenders. Atletico will need to keep a very tight watch if they are to remain unscathed.

An old nemesis for United could once again haunt the English side. Luis Suarez is still firing on all fronts with 11 goals and two assists across all competitions. He scored an absolute worldie with his left foot from almost the halfway line against Osasuna, giving everyone a reminder of how class is permanent. Indeed, he does not have the pace of old but Suarez’s instincts inside the penalty box is absolutely world-class.

📊| Luis Suarez has overperformed his expected goals by 36.45 since 2015/16, only Lionel Messi has more. Antoine Griezmann is fourth in the rankings. [via @louorns]

United’s backline can be breached well enough as this season has shown and Suarez is the perfect attacker who can take advantage. With creative players supplying the balls, the Uruguayan can feast with both his feet and head. The fact that he has an uncanny ability of knowing where the pass may land up gives him an added edge.

The edge is certainly with United with the home support in full voice. However, Atletico are the better team on recent form and can expect to produce a game of it. FootTheBall predicts a 2-1 win for the Red Devils.