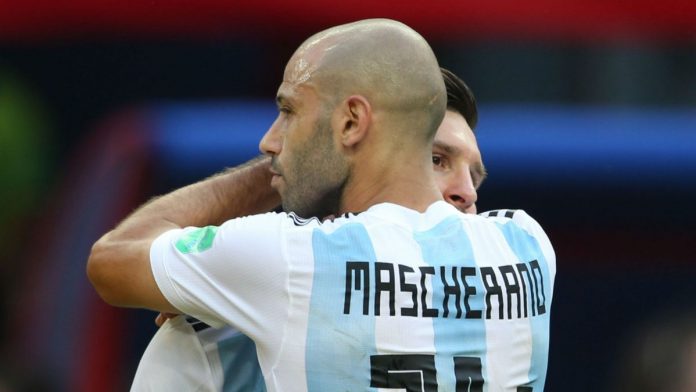 The former Barcelona player made the announcement on Argentinian television saying, “It’s time to say goodbye.”

“The story has ended, I think we gave everything right until the end,” said the 34-year-old.

He will now concentrate on his club football, where he plays as a defender for the Chinese Super League club, Hebei China Fortune.

“I hope the guys that follow can win a title. Now, I must support them from the outside. I’m sure sooner or later we’ll get there,” he added.

Mascherano admitted that France were the better team over the 90 minutes and said the defeat in Kazan had “shattered the illusion.”

Answering a question about whether his decision could be followed by those of other players, including Lionel Messi, Sergio Aguero or Gonzalo Higuain, he replied, “More than anything I hope they keep going. That’s what life is all about, to keep trying.”

Mascherano said that defeat against France was “a really crazy game” and that France clawing their way back to 2-2, after Argentina had been in front “did a lot of damage” to the South American team.

“It was hard to lift ourselves up, we gave everything until the end”, he emphasised, adding that “when you’re empty, you have to admit that your rival is better.”

Mascherano competed in four editions of World Cup tournaments. He was part of the team that reached the final of the 2014 Brazil World Cup only to be beaten by Germany.