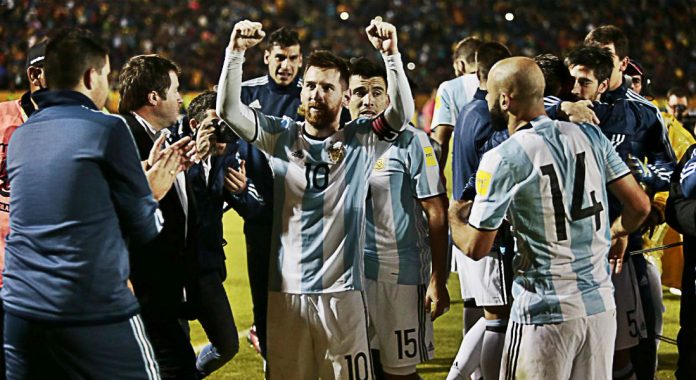 Barcelona forward Lionel Messi bagged a hat-trick as Argentina secured a direct berth at next year’s World Cup in Russia with a 3-1 victory over Ecuador on Tuesday. In a dramatic final round of South American zone qualifiers, Brazil eliminated Chile with a 3-0 home victory, Venezuela wrecked Paraguay’s hopes with a 1-0 win in Asuncion, Uruguay won 4-2 at home to Bolivia and Colombia clinched an automatic place by drawing 1-1 with Peru.

By finishing fifth in the 10-team CONMEBOL group, Peru earned the right to meet Oceania winners New Zealand in a two-legged playoff.

Needing to win to avoid missing the World Cup for the first time since 1970, Argentina got off to the worst possible start against an Ecuador side already out of contention for next year’s tournament.

The hosts took the lead in the first minute when Romario Ibarra fired in from close range after combining smartly with Roberto Ordonez. The five-time Ballon d’Or winner gave the visitors the lead eight minutes later when he snatched possession from Ecuador’s defence before thumping a shot past Maximo Banguera.

Messi pocketed his third goal just after the hour mark, chipping into the top left corner from the edge of the box while being dragged to the ground. The result broke a run of four matches without a victory for Argentina in the CONMEBOL qualifiers. Before Tuesday, their last win in the qualifying tournament was a 1-0 defeat of Chile on March 23.

Arguably the most gripping of Tuesday’s qualifiers was Peru’s home clash with Colombia at Lima’s Estadio Nacional.

Bayern Munich midfielder James Rodriguez gave the Cafeteros the lead just before the hour mark, but Paolo Guerrero sent the home fans into wild celebrations by bending in a late free-kick. The result ensured Colombia finished fourth – CONMEBOL’s last automatic qualifying spot – while Peru, hoping to secure a place in the World Cup finals for the first time since 1982, grabbed fifth to stay alive.

In Sao Paulo, Manchester City striker Gabriel Jesus netted a brace as Brazil sunk Chile with a 3-0 victory at Allianz Parque. Barcelona midfielder Paulinho was also on target as reigning Copa America champions Chile missed out on a World Cup slot for the first time since 2006. Brazil finished top of the group with 41 points from their 18 matches, 10 points ahead of second-placed Uruguay.

Needing a victory to book a ticket to Russia, Paraguay had their hopes dashed by an 84th-minute strike from 19-year-old Venezuelan midfielder Yangel Herrera. The Vinotinto finished last in the group with 12 points while Paraguay ended in 7th spot with 24 points. In Montevideo, Luis Suarez scored twice to lead Uruguay to a 4-2 victory over Bolivia. Edinson Cavani and Martin Caceres were also on the scoresheet for the hosts, who conceded via own goals from Gaston Silva and Diego Godin.