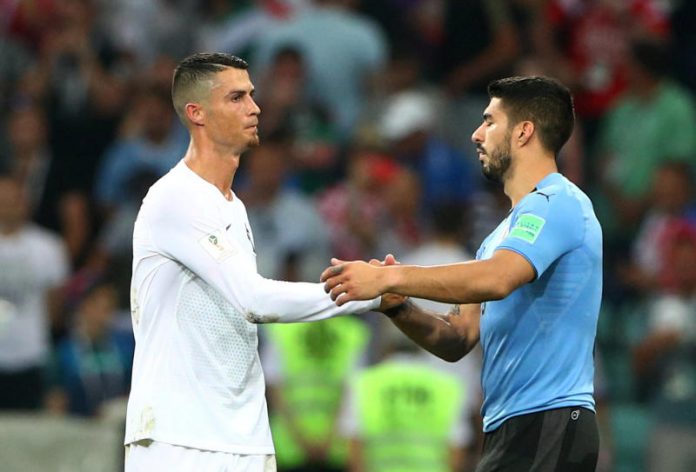 European champions Portugal bowed out of the Russia World Cup in a way that their coach described as “very sad”, after Uruguay’s Edinson Cavani scored twice in their round of last 16 clash on Saturday.

“First of all, congratulations to Uruguay,” said the dejected 63-year-old tactician. “It’s very sad for Portugal though. We know that the squares have been full back home and that the people there were really rooting for us. We could feel their presence with us and there’s a real sadness in the dressing room that we weren’t able to make it through for them.”

To be fair, Portugal had four impressive performances in Russia, including the one against Uruguay at the Fisht Stadium.

Great efforts were mounted by the Portugese, who, in the 55th minute, for the first time at this World Cup struck a ball into the tightly-guarded Uruguay net.

Following a corner, Ronaldo rose high, but it was the unmarked Pepe, who sent home the header from behind, as the oldest Portugal player to score at a World Cup.

The goal temporarily put Portugal and Uruguay on the same starting line, until seven minutes later Rodrigo Bentancur dribbled to the box and delivered a well-weighted pass to Cavani, who lashed the ball into the far corner.

Portugal had more than 60 percent of possession. Uruguay was tight in defence, and they had only six shots on target in their previous three group matches. In the single game against Portugal they saw five more.

“In football, there are no moral victories and I would have preferred to play worse and win the match. We tried our best and we played a good game,” Santos said.

The Fisht Stadium also saw the first group match of Portugal, against 2010 World Cup winner Spain. In what was one of Russia World Cup’s most spectacular matches, 33-year-old Real Madrid forward Cristiano Ronaldo lit up the game with a hat-trick.

In the match against Morocco this World Cup, Ronaldo scored the opener for Portugal in the fourth minute by out-muscling his marker and firing in a bullet header after a Joao Moutinho corner at Luzhniki Stadium. With his 85th international goal, he surpassed the mark held by Hungary legend Ferenc Puskas.

Then, against Iran, Ricardo Quaresma put Portugal ahead 1-0 after he capitalized on the open space left by the Iranians and curved the ball into the left upper corner of the net past the fingertips of the Iranian goalkeeper. They could have proceeded to the knockout stage as the Group B winner until late second half when a controversial penalty goal from the opponent forced them to settle in a draw.

BBC pundit Alan Shearer described the decision to award Iran’s late penalty as “shambolic”. “How on earth can he think that is a penalty? If he thinks it is deliberate handball, he is crazy,” he said.

In the game Portugal did blow up their chance once, when Ronaldo missed out on a penalty. But this didn’t eclipse his efforts and determination in his fourth World Cup trip.

The 33-year-old Ronaldo made most appearances at World Cups and European Championships among all players since his debut in 2004.

Named as World’s best player on five occasions by FIFA, he led his country to win the first European Championships trophy in 2016. A World Cup title is the only thing missing from his collection of accolade.

Portugal’s center back Jose Fonte once said that they felt “blessed” to have Ronaldo.

“He’s always the best player in the world,” he said.

“He gives us confidence that we can win every match. We have to enjoy his performance. He is relentless. He is a very hard-working player, and always trains everything. He takes care of his body, and he is always ready. He is a great leader, and a good example for everyone. We are just blessed to have him.”

Ronaldo will be a 37-year-old at the beginning of the Qatar World Cup 2022, and there are speculations if Russia will be his last World Cup stop.

Fernando Santos, coach of Portugal who has reached the knockout stages in major tournament for the fourth time, said: “Cristiano still has a lot to give to football and I hope he will stay to help the young players grow and develop. We have a team with many young players and of course we all want him there with us.”

“He is excellent,” Figo once commented. “There is a new generation coming through and everything has its own turn.”

Although the “new generation” lost, the emotional Santos insisted that they “played a good game”.

“In the first half we didn’t manage quite well with less intensity. But in the second half, we did better in circulating. I do feel that the second half was very good from us in terms of desire and our determination to score.”

Before Figo’s time Portugal had never won the European Championships. Figo saw Ronaldo who had played in the national squad for 12 years to lead the team crown in Europe.

Whether Ronaldo will go to Qatar or not, he will see perhaps another young man growing up to fulfill the his dream.

Just like what they had in the national anthem: “Against the cannons, March, March.”